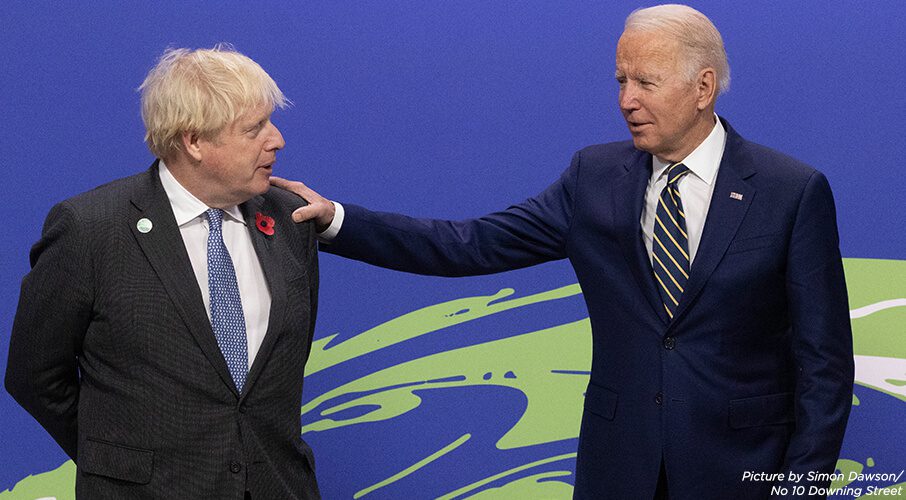 The world is learning the hard way that the global economy still relies on fossil fuels, writes Jeff Kucharski. While the emissions they produce must eventually be reduced to net-zero, this process will take decades to accomplish.

With the UN-sponsored Climate Change Conference (COP26) climate talks in Glasgow having reached a crescendo, it is important to review some of the agreements and implications that have resulted from this process and assess the impact on Canada’s energy resources sector.

Putting the rhetoric in context

One can take seriously the undeniable threat posed by climate change while also asking whether some of the theatrics and hyperbole surrounding climate summits only serve to trivialize the process.  The Glasgow conference began with the usual apocalyptic hyperbole, similar to previous COP summits.

British Prime Minister Boris Johnson opened the conference by saying the world is “strapped to a doomsday device.” European Commission Vice President Frans Timmermans opined that “we are fighting for the survival of humanity.” UN Secretary-General Antonio Guterres breathlessly proclaimed that the world is “still careening towards climate catastrophe.” And Greta Thunberg provided her own brand of helpful insights by dropping the f-bomb and singing “You can shove your climate crisis up your arse,” adding that “COP26 is so far just like the previous COPs and that has led us nowhere.” Really?

It is important to note that the climate scientists that write the Intergovernmental Panel on Climate Change (IPCC) reports on which the talks rely do not use such hyperbolic rhetoric. According to the IPCC, its reports are supposed to focus on a “solution-based approach,” helping identify how high-level climate policy goals might be met without advocating any specific mitigation options.

Naturally, at climate summits, ambitions are set artificially high on purpose, supposedly so that even when results fall short the world is left better off than before. In November 2019, the UN set a very high bar stating that the world needed to cut greenhouse gas (GHG) emissions “by 7.6% every year for the next decade” in order to hold the global temperature increase to 1.5 degrees by 2100. The IPCC has said that at current levels of CO2 emissions the globe’s 1.5 degree “carbon budget” will be used up within 12 years. The IPCC has said that global temperatures can remain below 2℃ during this century only under scenarios where CO2 emissions reach net-zero around 2050.

What has been accomplished at COP26?

It has been estimated that the additional measures agreed to at COP26 will result in about a 7.5 percent reduction in carbon emissions by 2030. However, despite the 5.4 percent dip in emissions brought on by the COVID-19 pandemic in 2020, global emissions are set to rise by 4.9 percent in 2021.⁠1 Given that the world has already warmed by 1.1 degrees and with economies growing again after the pandemic, many scientists and informed observers acknowledge that we have already passed the point of being able to meet the 1.5-degree goal this century.

In Glasgow, the International Energy Agency (IEA) made the surprising announcement that global warming could be limited to 1.8 degrees Celsius above pre-industrial levels by 2100 if all the commitments made in Glasgow were completely fulfilled and on time. Given that no COP climate commitments have ever been completely fulfilled on time, that would appear wildly optimistic. In any case, if the IEA’s analysis is correct, then fossil fuel production does not need to be shut down immediately and resources don’t have to be left in the ground after all because no such commitments were made at COP26.

At Glasgow, 20 countries also agreed to end financing for fossil fuel projects abroad. While several countries had already agreed to end international financing for coal, this agreement applies to oil and gas projects. The UK, Canada, US and several other countries signed on to the agreement, which promises to “end new direct public support for the international unabated fossil fuel energy sector by the end of 2022, except in limited and clearly defined circumstances that are consistent with a 1.5°C warming limit and the goals of the Paris Agreement.” Judging by the careful wording, this agreement does not seem to rule out providing government funding for projects like natural gas power plants utilizing carbon capture and storage (CCS) or financing liquefied natural gas (LNG) receiving terminals, all of which continue to be in high demand in Asia and will be required to help phase out coal and provide backup for an expansion of renewable electricity generation.

In Glasgow, 23 new countries signed on to a pledge to phase out coal power with major economies phasing out by the 2030s and the rest of the world by the 2040s. The countries also agreed to end all financing in new coal power generation domestically and internationally.

However, China, India and the US – which together account for over 70 percent of global (thermal) coal consumption – refused to sign on to the agreement. Both China and India rely heavily on coal power and the average age of their plants is only around 12 years, with 20-30 years of lifespan left in them. And US President Biden needs West Virginia Senator Joe Manchin, whose state is a major coal producer, onside to pass his legislative agenda. Coal currently accounts for 37% of the world’s electricity yet China and other large emitters have not committed to stop increasing coal use domestically. Since coal-fired power remains integral to energy affordability and economic sustainability in India and China, the prospects of coal-fired power plants being consigned to history anytime soon are considerably low.

It seems unfair for rich Western countries to expect energy-poor developing countries like India to remove coal from their energy mix while millions of their people still live without access to electricity or fuel for their stoves. In India, the pandemic diminished the ability of many people to pay for fuels and made it very difficult to travel to liquid fuel refilling stations during the lockdown. Yet India was criticized. Rather than criticize India for not signing on to net-zero emissions by 2050, rich countries should applaud India for making a commitment to 2070, given how far India needs to go to catch up with the developed West.

If other countries are serious in wanting India or other developing countries to align with the 2050 target, it’s unlikely that New Delhi would turn down the billions or even trillions of dollars in transfers needed to achieve that goal. In the meantime, India will likely continue to expand renewables, but will also expand reliance on coal power. It is easy to criticize India, but the reality is that coal is a cheap and reliable fuel source, both of which are critical to India’s continued economic development.

In his national statement at COP26, Prime Minister Trudeau announced that Canada will “cap oil and gas sector emissions today and ensure they decrease tomorrow at a pace and scale needed to reach net-zero by 2050.” This appears to build on earlier commitments he made on the campaign trail and at the Leader’s Summit on Climate in April, where he announced Canada will enhance its emissions reduction target under the Paris Agreement to 40-45 percent below 2005 levels by 2030.

The oil and gas sector, which accounts for about 26 percent of Canada’s total GHG emissions, had already agreed to cut emissions and several major producers have signed on to an initiative to achieve net-zero emissions by 2050. The Alberta government has already agreed to a 100-megatonne cap on emissions from the oil sands. The Prime Minister’s COP26 announcement raises questions about how much further the federal government will go in reducing caps on emissions, how the 5-year emissions targets would be issued and enforced, and whether the cap would apply to the whole oil and gas sector or whether it would target specific companies or extraction practices.

It is fair to ask why emissions caps are needed at all when Canada already has a price on carbon which will be ratcheted up over time (from $40 per tonne today to $170 per tonne by 2030). While the announcement may not have a significant negative economic impact beyond what has already been announced and agreed to, the question remains whether expanding oil sands production while staying under the cap is still a possibility.

Canada also announced a commitment toward achieving net-zero emissions in its electricity grid by 2035. Given that 60 percent of Canada’s power generation is hydro, and all coal-fired power plants are slated to be either decommissioned or retrofitted with CCS technology, this should be achievable. Strict emissions requirements already in place will only impact gas-fired power plants with lower efficiencies. The prime minister also announced upwards of $1 billion in aid for developing countries to help transition them from coal-based to low-emissions electricity. This is a positive move which should be applauded.

In terms of energy exports, Canada’s prospects for exporting its energy resources don’t seem to be significantly impeded by the commitments made in Glasgow so far. Given that the federal government is still proceeding to complete the TMX pipeline (which it owns), Canada remains on track to increase oil exports offshore. The prime minister also announced that Canada is “working toward” ending exports of thermal coal by no later than 2030. This statement is somewhat ambiguous but, in any case, the ban will have little impact on Canada’s balance of trade because the vast majority of Canada’s coal exports are metallurgical coal used in steel-making, and this is not directly affected by the ban.

It was reported on Oct 21, that Saudi Arabia, Australia and Japan were among some countries attempting to make changes to the IPCC Working Group III draft report that is to be published next March, according to leaked documents. Apparently, they objected to the following statement in the draft report: “the focus of decarbonization efforts in the energy systems sector needs to be on rapidly shifting to zero-carbon sources and actively phasing out fossil fuels.”

Of course, these countries are being criticized for daring to suggest changes to a report that is supposed to reflect policy options for governments to consider. In fact, what many countries legitimately argue is that their energy systems will still require fossil fuels for some period of years while they shift to alternative sources. It seems that some people in the IPCC may be listening to environmental advocacy groups that promote a kind of ideological purity test that blesses only certain “zero-carbon” sources for use in the transition. Fossil fuels with CCS and nuclear power are “dirty” under this rubric, even though they are low carbon. However, the reality is that a wide range of low-carbon sources will need to be employed to meet the aggressive targets that have been agreed to in the COP process.

Despite the lofty ambitions and rhetoric surrounding climate summits, the hard work begins where climate commitments meet the reality of economics and local politics back in home countries. As such, trade-offs will have to be made in order to manage the impact on economies, prices and jobs while also being fiscally responsible. The consequences of not doing so risk social and political pushback and ultimately public support for the transition itself. The consequences are also seen in energy markets today, reflected in fuel shortages and rising prices in many countries.

The world is learning the hard way that the global economy still relies on fossil fuels. While the emissions they produce must eventually be reduced to net-zero, this process will take decades to accomplish.

Jeff Kucharski is Adjunct Professor at Royal Roads University and a Senior Fellow at the Macdonald-Laurier Institute. He has a PhD in energy science and his current research focuses on energy, transitions, energy geopolitics and energy security.

1 Figures from the Global Carbon Project and BBC. See: https://www.bbc.com/news/science-environment-59148520

Canada is not a half-mast nation: Patrice Dutil for Inside Policy