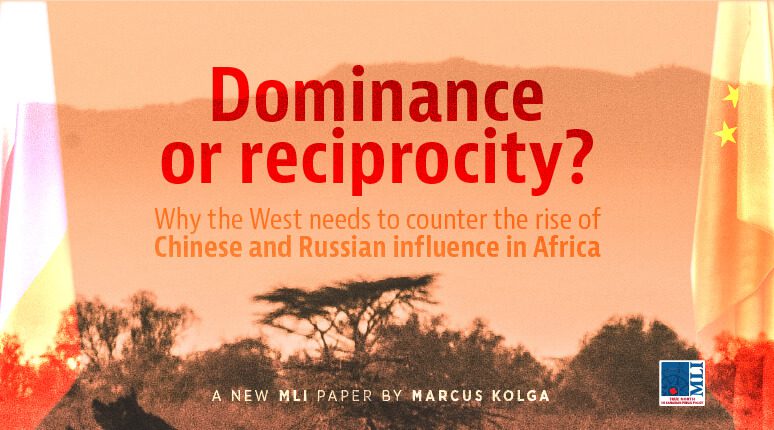 OTTAWA, ON (November 10, 2021): As China and Russia steadily tighten their influence over African nations – building infrastructure and, in some cases, arming dictators in exchange for resource development opportunities and other benefits – Canada and its allies must be assertive in reviving diplomatic and developmental relationships that have been left to wane in the region.

A new MLI study examines how decades of receding interest and steep cuts in aid and investment for African nations from traditional supporters, including Canada, have enabled Beijing and Moscow to fill the gap.

In the report titled “Dominance or Reciprocity? Why the West needs to counter the rise of Chinese and Russian influence in Africa,” MLI Senior Fellow Marcus Kolga explores how financial and military support from the world’s leading authoritarian regimes has undermined democracy and human rights in Africa, creating a 21st-century economic and security challenge for the West.

China has been able to fund and build major infrastructure projects through its Belt and Road Initiative throughout Africa, in return for political influence and significant control over the continent’s critical minerals sector. For its part, Russia has nearly tripled its arms exports there since the early 2000s, and Russian private military contractors have been instrumental in training the armies of various African regimes, securing lucrative commodity extraction rights in the process.

“While some African governments are benefiting materially from these arrangements, the ultimate beneficiaries are China and Russia themselves,” writes Kolga. “In addition to being saddled with significant debt, African nations that fall under this influence confront the threat of growing corruption, human rights abuses, and greater authoritarianism.”

Both countries covet secure access to port facilities around Africa to facilitate shipping and trade. However, the facilities can grow into dual-purpose infrastructure, offering possible military uses as naval bases. Indeed, China has already acquired a military base in Djibouti and Russia has gained access to a naval port in Sudan by the Red Sea.

For Canada, whose visibility as a UN peacekeeper in Africa has steadily declined in recent decades, the paper discusses options for re-engaging with states in the region.

Canada can also work with other partners, like the African Development Bank, the African Union, and the Tokyo International Conference on African Development, to better promote investments in African infrastructure. This could culminate in a Canada-Africa or G7-Africa summit, which would strengthen Ottawa’s commitment to Africa while facilitating negotiations on future collaboration.

“Ultimately, Canada should also re-affirm its commitment to liberal values in Africa and build a realistic, long-term strategy in partnership with allies, Canadian non-governmental organizations, and corporations with expertise and a presence in Africa.”

To read the full report, click on the button below.

Marcus Kolga is the founder of DisinfoWatch.org and a Senior Fellow at the Macdonald-Laurier Institute’s Centre for Advancing Canada’s Interests Abroad. He is an international award-winning documentary filmmaker, journalist, digital communications strategist, and a leading Canadian expert on Russian and Central and Eastern European issues.

For more information, the media are invited to contact:

Thoughts on the Supreme Court’s narrow rejection on the right not to be offended in Ward v. Quebec: Sirota for Inside Policy

Thoughts on the Supreme Court’s narrow rejection on the right not to be offended in Ward v. Quebec: Sirota for Inside Policy