in Columns, Latest News
Reading Time: 3 mins read
A A 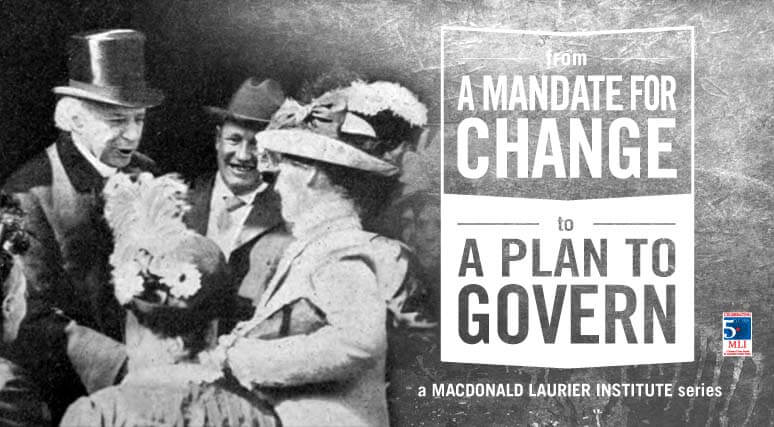 To see all the entries in MLI’s “From A Mandate For Change To A Plan To Govern” series, click here.

Change. It’s a powerful political message. It tends to be optimistic and forward-looking.  It connotes a break from the past and a new beginning.  It can come to represent “sunny ways” as Prime Minister Justin Trudeau said on election night.

His new government was elected with a mandate to provide “real change” and Friday’s Speech from the Throne will signal its plan to deliver it.  Here’s hoping that Mr. Trudeau draws inspiration from former Liberal Prime Minister, Sir Wilfrid Laurier, who was the first to promise a sunnier vision than his outgoing Conservative predecessor more than 120 years ago.

Laurier’s legacy of principled leadership offers plenty of lessons for the new Liberal government.  He would become the longest-serving leader of a major political party in Canadian history and the only Prime Minister to win four consecutive federal elections by backing up his pledge of real change with real action.

Here’s hoping that Mr. Trudeau draws inspiration from former Liberal Prime Minister, Sir Wilfrid Laurier, who was the first to promise a sunnier vision than his outgoing Conservative predecessor more than 120 years ago.

Mr. Laurier’s record of governance includes liberalizing immigration policy to populate the country particularly in the new western provinces, supporting the construction of transportation infrastructure to bolster economic development and export growth, steadily reducing tariff rates to provide Canada with a tax advantage relative to the United States, and pursuing free trade and market access for Canadian goods and services. It was a powerful plan that strengthened the country and positioned it well for the 20th century.

Mr. Trudeau wisely emulated Laurier’s positivity in the recent election campaign. It marked a major differentiator between him and his opponents and is one of the reasons that the Liberal Party secured a majority government. The resultant goodwill has endured through the swearing-in of the new Cabinet and Mr. Trudeau’s first international meetings as Prime Minister.

But ultimately the sunshine will subside and he’ll need to back up his positive message with a clear governing agenda.  The government has no shortage of policy objectives.  It has promised to help strengthen the middle class, boost the economy, increase Canada’s refugee intake, reform the electoral system, enact an ambitious climate change plan, negotiate a new Health Accord with the provinces and territories, bolster retirement income, expand access to affordable housing, amend the previous government’s national security legislation, modernize the Canadian Armed Forces, improve First Nations education, and review the full suite of tax expenditures with the goal of “saving” $3 billion annually.

If it seems like an ambitious set of objectives, it’s because it is. Many of them are laudable.  And no one can argue that the new government doesn’t have a strong electoral mandate to pursue them.

But the real test will be how Mr. Trudeau plans to achieve these goals. Real change must rest on solid ideas and “evidence-based policy.” Herein lies the potential to draw from the lessons of Laurier.

Mr. Trudeau wisely emulated Laurier’s positivity in the recent election campaign. It marked a major differentiator between him and his opponents

The Macdonald-Laurier Institute, which owes part of its name to the first great Liberal Prime Minister, is ready to help.  The institute has been an important voice for sound federal public policy since its establishment five years ago.  We’ll soon begin releasing a series of short policy papers, entitled From a Mandate for Change to a Plan to Govern, to help to inform the new government’s plan to achieve its stated objectives. The analysis will draw from our extensive body of research, and the ideas and inspiration of Laurier.

It’s worth remembering that Laurier was an optimist. He believed that, with the right choices and good governance, the 20th century could belong to Canada. He may have been slightly off – give or take a hundred years – but there are plenty of reasons to be positive about Canada’s future. This week’s Speech from the Throne will be the first chance for Canadians to see how the new government will translate its mandate for change into a plan to govern. Mr. Trudeau’s goal should be to prove Laurier’s prognostication accurate for the 21st century.

Dr. Brian Lee Crowley is the managing director and Sean Speer is a senior fellow at the Macdonald-Laurier Institute.