Jumping from 9th to 6th place out of 15 countries, Canada weathered the initial stages of Omicron better than most due to high vaccination rates. Yet this success has come at a major relative cost, including that Canada was the second most stringently locked down country over the course of the pandemic.

OTTAWA, ON (January 20, 2022): With the Omicron variant at its apex, is Canada finally finding its footing in its response to the COVID-19 pandemic? MLI’s COVID Misery Index (CMI) has returned for a special Omicron update to provide a comprehensive overview of 15 countries’ pandemic performances.

What is the CMI? Click here for more information about the Index and its methodology.

“Canada’s position in the CMI reflects a significant improvement since we first began tracking it 10 months ago,” says MLI Senior Fellow and creator of the CMI, Richard Audas. “Canada is looking to the endemic stages of COVID-19 both with some reasonable successes in hand and significant lessons to learn.”

However, challenges remain for Canada. Most especially, lockdown measures and other public health restrictions in Canada have been far more stringent and longer lasting than in most peer countries. Canada places 14th out of 15 on this measure.

Additionally, persistently poor economic performance across a variety of measures means there is still significant room for improvement. Indeed, new to this update of the CMI are measures of inflation, on which Canada scores 11th out of 15. As MLI Munk Senior Fellow Philip Cross has warned, inflation in Canada appears neither transitory nor easily contained – and will likely be with us for the foreseeable future.

“Overall, Canada has paid a far higher price than its peers to achieve success in the pandemic,” argues Audas. “Canadians remained locked in their homes longer and the economy placed under greater strain than many of our peers, who achieved similar or better health outcomes across the pandemic.”

Check out the full, interactive CMI here for more information, or scroll down below to read more key highlights from this most recent update. 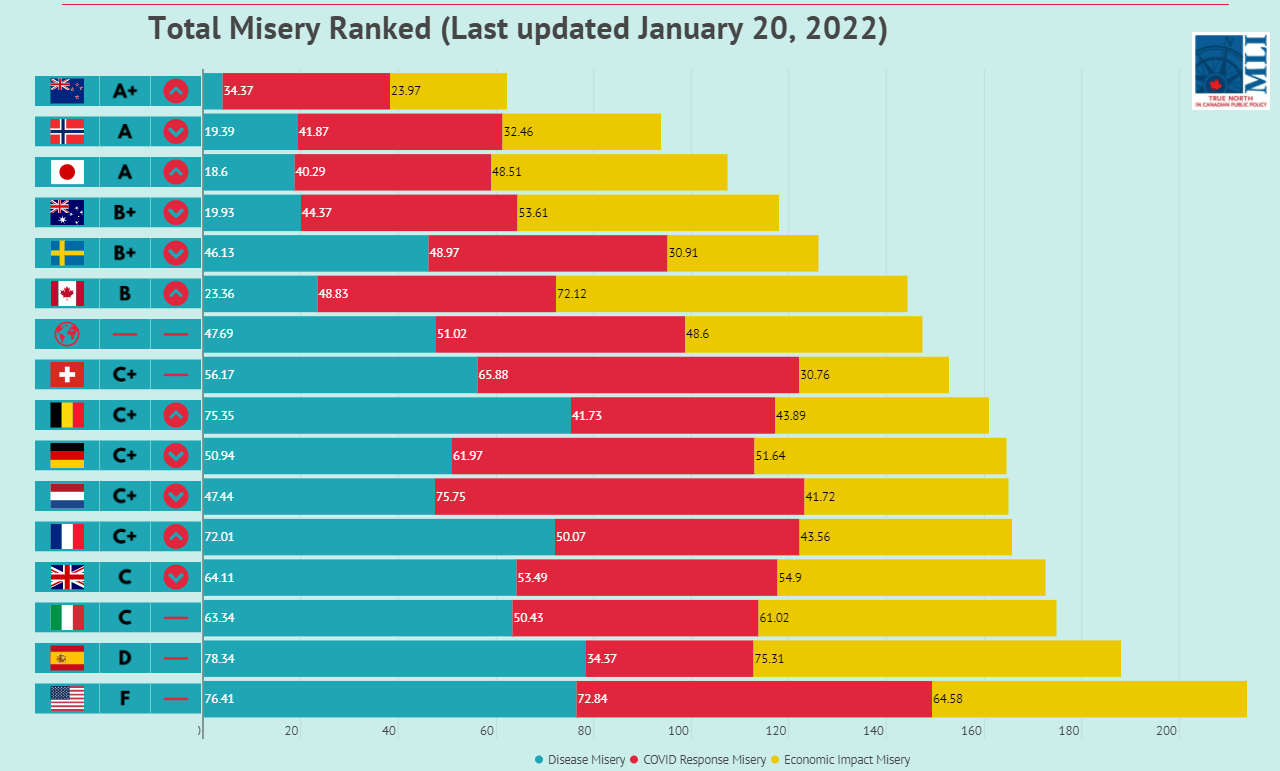 According to Audas, the CMI has been “a meaningful touchstone for a better understanding of how countries have responded to the pandemic over its entire course, shining more light on both the best and worst practices among countries in the developed world.

“Ultimately, focusing on human wellbeing comprehensively is valuable, and some countries have had far more success in doing so. Canada should seek to learn from this data and apply it to future policy-making in both pandemic and non-pandemic contexts.”