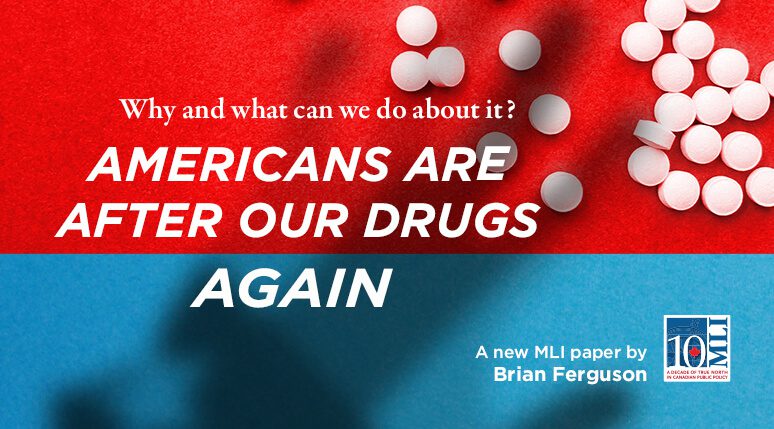 OTTAWA, ON (November 2, 2020): The drama of the upcoming American election continues to fascinate Canadians. However, a key election issue that could have a serious impact on Canadians’ own health and wellbeing has gone largely unnoticed. An old idea for addressing America’s perceived problem of high-priced prescription drugs is back in a big way.

During the campaign, Trump promised that new regulations would allow US states to import medicines from Canada “at a fraction of the price” paid in the US. Though the idea is championed by President Donald Trump and state legislators, it has bipartisan support, notably by Democrats Bernie Sanders and presidential nominee Joe Biden.

In the latest MLI paper, “Americans Are After Our Drugs Again: Why and What Can We Do About It?” author Brian Ferguson argues that the resurgence of the notion of drug re-importation is something that should greatly concern Canadians.

As Ferguson explains, drug reimportation schemes usually envision individual states making large bulk purchases from Canadian suppliers. Such action would require approval from Washington to permit bulk importation nationally. This would significantly disrupt the Canadian supply of pharmaceuticals, given the sheer size of American markets. A widely cited study estimated that if 20 percent of US prescriptions were filled from Canadian re-imports, the Canadian supply would be exhausted in 155 days.

One can look towards the EU, where parallel import of drugs became a significant issue within the single market. A number of countries, such as Greece and Spain, employed price control regulations making them natural targets of supply for higher-price EU countries like Germany. This is the kind of situation that Canadian policy-makers fear will arise here under the various American proposals.

Ferguson finds that the evidence from the European example supports the view that the bulk of the financial benefit from parallel imports is primarily for the wholesaler rather than the national health system of the importing country. Moreover, it certainly does not benefit the individual consumers in those countries.

“In many ways, re-importation as a cure is typical of the American approach to health care issues – a quick fix that engenders a range of collateral problems, each of which is also thought to be amenable to a quick fix,” writes Ferguson.

The sponsors of the various US bills seem to believe that they will be able to legislate away all of the obstacles to accessing as many drugs via Canada as the American market might demand. However, this ignores the root causes of their pricing problems. This also runs the risk of any attempt by Canada to block re-exports as being seen as unfriendly.

As Ferguson explains, “Canadians, therefore, not only have to convince Americans that their proposals would be harmful to us; we also have to explain to them the source of their price problem.”

This would not stop individual Americans from buying their drugs in Canada nor would it present an obstacle to Canadian generic manufacturers exporting into the US market.

Ferguson urges that Ottawa must not be complacent on this issue as this could seriously disrupt the Canadian market. Ottawa should instead make our own supply chain more robust, specifically by ending our reliance on just one or two countries for supply, not only for drugs, but for a range of essential commodities.

More importantly, the Canadian government needs to make it plain that re-importation is not a cure for the drug price problems facing our Southern friends.

As Ferguson concludes, “we have to make it plain to the US that the proposed re-importation policy will not work – for either country.”

***
Brian Ferguson is Professor of Economics at the Department of Economics and Finance at the University of Guelph. He is a Faculty Associate of the Canadian Centre for Health Economics.

Addressing the crisis of distrust in police: Jamil Jivani in the National Post