America shouldn’t go it alone in containing China: Charles Burton in the Globe and Mail 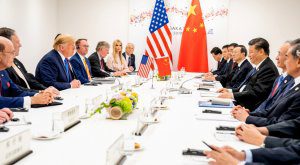 A U.S.-led international effort would not only serve American interests vis-a-vis China, but also reinvigorate its relations with many key allies, including Canada, writes Charles Burton.

While its agenda has been caustic and divisive, one thing the Trump administration has gotten right is in recognizing that the People’s Republic of China poses a serious threat to the principles of fairness, reciprocity and justice in international relations.

U.S. leadership on this issue is sorely needed, given the absence of consensus among Western nations on how to rein in China’s appalling violations of established norms of trade and diplomacy, including its audacious territorial expansion into the South China Sea and elsewhere.

Back in 2017, it was unlikely that Washington would have been able to rally much of a coordinated international response. China’s sophisticated manipulation of corporate business interests through its extensive political influence operations in Western capitals, alongside deep uncertainty among U.S. allies of America’s commitment to them, would have prevented such collaboration.

But China’s image has suffered in the wake of COVID-19, which has hardened views in the West. Its initial coverup, its use of false narratives to shift blame about the origins of the pandemic, and its exploitation of the crisis to make political gains around the world (its unseemly “mask diplomacy” in Europe, its crackdown in Hong Kong, its territorial grab across the Sino-Indian border) have clarified the threat posed by Beijing.

There is also growing recognition of China’s strategy of spurious trade embargoes and “hostage diplomacy” to pressure middle powers like Canada, Australia and others. China blatantly uses coercive measures to force smaller countries to comply with the PRC’s many demands, such as allowing Chinese state acquisition of mineral and energy resources around the world, removing national security restrictions on the export of sensitive technologies, installing Huawei 5G equipment into national telecommunications networks, and tolerating zero criticism of Chinese state behaviour.

With little change in China’s recent behaviour, Western policies of appeasement have now been discredited. This presents an opportunity for the U.S. to assert, once and for all, that it is not a declining power. Yet, as Washington reshapes its engagement with China, it needs to start including middle powers in the negotiations. Limiting the engagement to bilateral fora between the U.S. and China has inadvertently given Beijing free rein to exploit power imbalances with smaller countries, weakening the global network of alliances and institutions meant to uphold democracy, justice and peace.

This summer, 19 prominent Canadians urged Ottawa to effectively nullify the Canada-U.S. Extradition Treaty by not extraditing Huawei chief financial officer Meng Wanzhou to the U.S. They hoped this would lead to the release of Canadians Michael Spavor and Michael Kovrig, who remain in Chinese jails under appalling conditions without due process.

A more effective strategy may be found in confronting China’s aversion to multilateral challenges to its actions. A U.S.-led multilateral coalition to enforce effective measures against bullying by China toward any member nation would significantly undermine Beijing’s divide-and-conquer strategy. China would never dare subject a U.S. diplomat-on-leave (which is the case for Michael Kovrig) to such abuse, and that is the point. The threat of being singled out for Chinese economic retaliation (or worse) inhibits allies from, for example, following Washington’s lead in implementing Magnitsky sanctions. It also makes it difficult for lesser powers to adopt a more robust response – more aligned with the U.S. – to China’s increasingly aggressive international behaviour.

The U.S. alone has the means to take on China unilaterally. American allies who now see China for the bully that it is may be motivated to confront it, but individually, they lack the wherewithal to stand up to China. A U.S.-led international effort would not only serve American interests vis-a-vis China, but also reinvigorate its relations with many key allies, including Canada.

It would also force political elites in Western nations – who are still struggling against China’s attempts to increase its influence beyond its own borders – to join together and issue a transparent and unambiguous response to China’s actions. The U.S. and its allies, including Canada, must come together to demand fairness and reciprocity from China at all levels.

Clearly, Washington needs to take the lead among advanced Western democracies and Indo-Pacific partners to neutralize China’s strategy to displace the U.S. as the leading global superpower in order to serve Beijing’s hostile power ambitions. Unity of purpose and harmony of action on China will only come if the U.S. takes the initiative in leading a collaborative response.

Charles Burton is senior fellow at the Macdonald-Laurier Institute’s Centre for Advancing Canada’s Interests Abroad, and former counsellor at the Canadian embassy in Beijing. He is also a Non-Resident Senior Fellow at the European Values Center for Security Policy in Prague.

Post-secondary education this fall will be a tumultous experiment: Ken Coates and Carin Holroyd in the Star