Xi is not attending the Glasgow summit; why is Canada going to the Beijing Games? J. Michael Cole in the Toronto Star 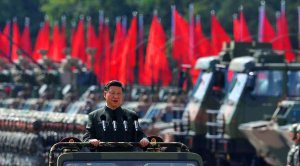 Beijing’s strongman is unyieldingly committed to a world view that has hijacked co-operation with the world’s second-largest economy and rising superpower on matters that affect us all, writes J. Michael Cole in the Toronto Star.

As world leaders gather in Glasgow this week for the COP26 summit on the global climate crisis, the absence of China’s president, Xi Jinping, has not gone unnoticed. China’s would-be president for life did not even deliver a speech by video. Instead, he sent a mere written statement bereft of any concrete commitments.

There has been abundant speculation about why Xi hasn’t travelled outside China for the past 21 months. The COVID-19 pandemic only partly accounts for this self-isolation. More to the point, Xi’s absence in Glasgow can conceivably be attributed to his refusal to brush elbows with U.S. President Biden and other members of the democratic camp.

Indeed, doing so would suggest that Beijing is giving in to external pressure to adjust its policies, in light of how it has made collaboration with the United States on climate change contingent on Washington ending its criticism of China’s destabilizing behaviour and domestic crackdown.

Beijing’s strongman is unyieldingly committed to a world view that has hijacked co-operation with the world’s second-largest economy and rising superpower on matters that affect us all. Unless the West abandons its pressure on Beijing to act responsibly at home and abroad, the world will be taken hostage by a party apparatus that gives precedence to ideology over the universal good.

Xi’s star outside China has dimmed considerably in recent years, largely the result of Chinese military assertiveness in the East and South China Sea and the Taiwan Strait, Beijing’s coverup of the origins of the COVID outbreak, and its rampant human rights violations in Xinjiang, Tibet, and Hong Kong. There is no doubt, therefore, that Xi would have been an outlier — and perhaps even shunned — at Glasgow. And for the head of an ultra-personalistic authoritarian party-state, such humiliation cannot be countenanced.

With China inflexible in its ideology and led by a president who cannot stand losing face on the international stage, the question arises as to whether the democratic camp, of which Canada is a proud member, might also want to consider making its chumminess with China more conditional.

On matters of global — and vital — importance, such as climate change, all governments should be able to set aside their differences, and Ottawa should have no compunction in collaborating with Beijing on this issue even if we have serious differences over human rights, democracy and territorial ambitions.

However, on matters of a less planetary scale, especially activities that serve as platforms to propagandize in favour of Xi’s highly repressive regime, the democratic camp should really ask itself whether it wants to be complicit.

If Xi is willing to let his ideological differences with the West get in the way of his country’s participation in efforts to secure a decent future for the generations to come, then why should we, in the democratic camp, legitimize his dogmatism and authoritarianism by participating in the Beijing Winter Games — an event that the communist regime will assuredly exploit to the hilt to promote its disturbingly Orwellian system?

By hijacking co-operation on combating climate change, Beijing seeks to condition us into abandoning the liberal-democratic rules of the game that have defined us for several decades. It wants us to be silent on the excesses of its ideology, and to look the other way as it subjects hundreds millions of its own citizens — ethnic minorities chief among them — to treatment that hearkens back to Nazi concentration camps and the Soviet Gulag.

However much Beijing and its propagandists seek to discredit research into what has been going on in Tibet and Xinjiang, evidence of systematic human rights abuses and ethnic cleansing is now incontrovertible, the result of decades-long research by dozens of Western and Chinese academics and journalists. That, alone, should compel our governments to question the wisdom, and the very morality, of giving face to a regime that orchestrates such abominations.

We can’t afford not to combat climate change; but we can certainly afford to be a no-show at next year’s despotic games.

J. Michael Cole is a Taipei-based senior fellow at the Macdonald-Laurier Institute and a former analyst with the Canadian Security Intelligence Service.

Across the Pond Ep. 2: The Past, Present, and Future of Canada in NATO

Across the Pond Ep. 2: The Past, Present, and Future of Canada in NATO