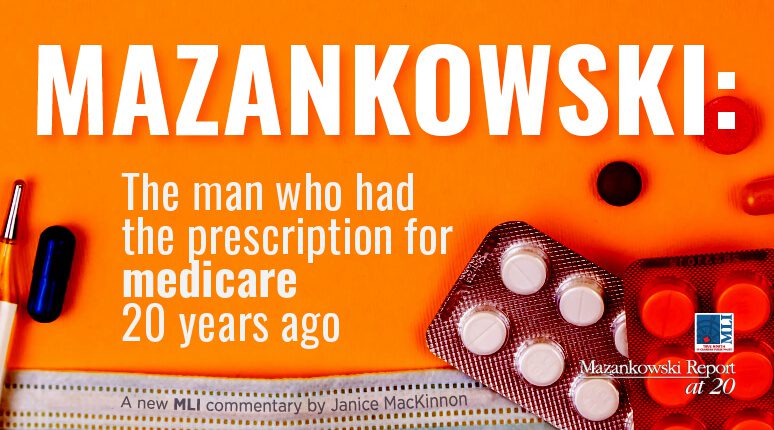 With the pandemic exposing Canada’s underperforming, beleaguered health care system, a new MLI commentary by Janice MacKinnon looks back on recommendations from two decades ago that are now more relevant than ever.

OTTAWA, ON (January 12, 2022): 2022 began with many Canadians once again facing restrictive public health measures and provinces struggling to manage the Omicron variant. As Canadians become more painfully aware of our health care system’s shortcomings, we should look back at some of the bold prescriptions found in a report that was released to the public 20 years ago this month.

The Mazankowski report, A Framework for Reform: Report of the Premier’s Advisory Council on Health, proposed big ideas for the Canadian health care system and remains the most serious attempt to prescribe comprehensive reforms.

“As the country faces enormous pressure on health services caused by the COVID pandemic, it is particularly important today to reflect on Mazankowski’s ideas for reform,” writes former Saskatchewan Finance Minister Janice MacKinnon in a new MLI commentary, titled “Mazankowski: The man who had the prescription for medicare 20 years ago”.

The Mazankowski report, which was commissioned by the Government of Alberta and led by former deputy prime minister Don Mazankowski, also coincided with other federal and provincial reports, such as the 2002 Romanow report. Across the reports, despite areas of common agreement, they differed significantly in their assessments of the sustainability of provincial health care systems and the nature and scope of change required.

“While the Romanow Commission argued that the health care system was sustainable and essentially working well, the Mazankowski report provided a convincing diagnosis of its two main problems: fiscal sustainability and long wait times for care,” notes MacKinnon. She also details how Mazankowski abandoned the myths and rhetoric about Canada’s health care system in favour of new ideas, boldly arguing that more spending is not the answer to improving Canadian health care.

Instead, the Mazankowski report called for the introduction of more competition and private service delivery into the health care system.

As MacKinnon notes, “rather than the existing highly regulated system, the report declared ‘It’s time to open up the system, take the shackles off, allow health authorities to try new ideas, encourage competition and choice.’”

The report goes on to recommend the Government of Alberta establish multi-year contracts with health authorities, set out key performance targets and budgets, and that health districts contract with public, private, and non-profit service providers with the goal of getting the highest quality services at the best price.

Another recommendation was for the health care system to become patient-focused. As the Mazankowski report argued, the present focus on hospitals and health providers comes at the detriment of patients and their role in managing their own health care. By prioritizing patients, the report made the case that silos in the health care system could be broken down, resulting in more integrated, coordinated care.

“The Mazankowski report had a significant influence on health care reform in Canada. It provided a succinct and insightful analysis of two of the main problems with the Canadian health system: its sustainability and long wait times for care. As well as providing an astute diagnosis of the problems in Canadian health care, the report made a compelling case for structural change,” writes MacKinnon.

MacKinnon’s paper is the first in a three-part series on the 20th anniversary of the Mazankowski report.

Next week: Jeffrey Simpson on why Canadians reject serious reform and cling to our mediocre medicare.

Janice MacKinnon is a Fellow of the Royal Society of Canada, a member of the Order of Canada, and a former Saskatchewan Finance Minister.