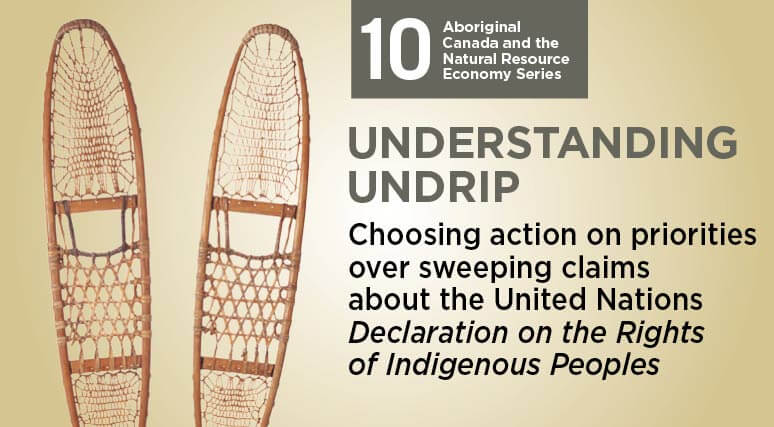 Blaine Favel and Ken Coates, in a newly-released Macdonald-Laurier Institute paper, examine next steps for Ottawa as it follows through on its endorsement of UNDRIP

OTTAWA, May 19, 2016 – The Government of Canada signaled a sea change in its approach to Aboriginal international law earlier this month with the decision to support the United Nations Declaration on the Rights of Indigenous Peoples (UNDRIP).

But expressing support for the declaration was the easy part. Now the hard work – of deciding what should be the priority versus what would be costly and counter-productive – begins.

In a newly-released Macdonald-Laurier Institute paper, Ken Coates, an MLI Senior Fellow, and Blaine Favel, an influential Plains Cree leader, examine next steps for Ottawa as it follows through on its endorsement of UNDRIP.

To read the full paper, titled “Understanding UNDRIP: Choosing action on priorities over sweeping claims about the United Nations Declaration on the Rights of Indigenous Peoples”, click here.

The paper welcomes UNDRIP as an opportunity to do better for Aboriginal Canada. But, Favel and Coates say, prioritizing aspects of the agreement that will provide genuine progress over those that are cost-prohibitive or counterproductive will be key.

“UNDRIP provides Canada with an occasion to and an opportunity to do better”, write Favel and Coates.

The biggest issue, say the authors, will be deciding how to implement the language contained in UNDRIP.

“There is a major distinction between a literal acceptance of the Declaration by codifying the UNDRIP articles and clauses in a single statute or a series of laws, which would be impractical and could undermine real progress, and a political interpretation that uses UNDRIP as a guideline for addressing Indigenous needs and aspirations”, write the authors.

“This paper recommends the latter approach”.

This paper is a companion piece to a previously-released publication by Favel and Coates that looks at Free, Prior and Informed Consent – another component of UNDRIP that has particular implications for the resource industry.

Ken Coates is a Senior Fellow with the Macdonald-Laurier Institute and Canada Research Chair in Regional Innovation at the Johnson-Shoyama Graduate School of Public Policy at the University of Saskatchewan.

Blaine Favel is Chancellor of the University of Saskatchewan. An influential Plains Cree leader, he is former Grand Chief of the Federation of Saskatchewan Indian Nations and he has served as Canadian Counsellor on International Indigenous Issues.

Comeau decision just the first crack in the internal trade barriers dam: Ian A. Blue in the National Post