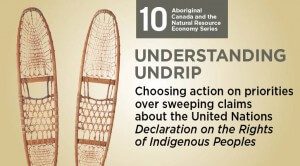 Ottawa’s endorsement of the United Nations Declaration on the Rights of Indigenous Peoples (UNDRIP) has finally opened the door to welcoming Aboriginal Canadians as shapers of national policy instead of supplicants pleading for government attention, write Ken Coates and Blaine Favel for iPolitics.

The Government of Canada’s announcement this week that it will endorse the UN Declaration on the Rights of Indigenous Peoples (UNDRIP) is an act ripe with symbolic significance — and a striking reversal of the position of the Harper government.

Assembly of First Nations National Chief Perry Bellegarde was quick to applaud: “Canada is sending an important message to Indigenous peoples, to all Canadians and the international community that Indigenous rights are human rights …” Government and Indigenous perspectives are more and better aligned on this issue than at any time in the last decade. Now the hard work begins, for everyone.

UNDRIP is a substantial document, with 46 articles ranging from the much debated requirement for “free, prior and informed consent” on resource development to commitments to support Indigenous language retention and education. It is, in the spirit of UN declarations generally, long on principles and short on details.

While some Indigenous leaders and their supporters are disappointed that the government did not provide specifics on implementation plans, the step-by-step approach is appropriate. Accepting UNDRIP as the government has done is a major change in policy. Given the complexity, potential impact and high expectations in Indigenous communities, it is vital that the government proceed carefully and in deep conversation with Indigenous peoples.

While it seems to prefer the more ambiguous and comprehensive phrase of “building nation-to-nation relationships”, the Trudeau government really does appear to be heading toward the co-production of policy. This should be a welcome change from the traditional budget day gift-opening that has long characterized government practice.

Put simply, UNDRIP is not an Indigenous declaration of independence. In many cases — such as influence over resource development — existing modern treaties and the “duty to consult and accommodate” requirements established by the Supreme Court likely already provide Indigenous peoples with the kind of authority envisaged under the Declaration.

What UNDRIP does do is publicly commit the federal government to work with Indigenous groups on a broad range of issues deemed essential to the autonomous cultural, economic and social survival of Indigenous communities.

Furthermore, Indigenous Affairs and Northern Development Minister Carolyn Bennett specifically observed that UNDRIP would be implemented in accordance with Section 35 of the Canadian Constitution, which “recognized and affirmed” the “Aboriginal and treaty rights” of Indigenous peoples in Canada. While some commentators found this to be an unnecessary qualification, it was, in fact, a statement that both strengthens the practical significance of UNDRIP and provides assurances to all Canadians that the Declaration is not a dramatic rewriting of Canadian legal and constitutional commitments.

What matters now is the careful articulation of the next steps. The private member’s bill on the immediate adoption of UNDRIP, proposed by NDP MP Romeo Saganash, is premature. To make bold statements and unattainable commitments about a document of this significance may be laudable in spirit, but it can only cause practical difficulties.

The government needs legislation of its own, drafted in full consultation with Indigenous groups, that lays out a detailed strategy for the inclusion of UNDRIP principles in Canadian law and policy. Indigenous groups could help the process substantially by working with government to outline those areas where existing Canadian practice and law are already in accord with, or even in advance of, UNDRIP requirements.

The country, in general, is not yet fully behind UNDRIP and the further empowerment of Indigenous peoples. Non-Indigenous Canadians obsess about UNDRIP’s potential to strengthen Indigenous influence over resource development. But they fail to recognize the extent to which recent legal decisions have granted Indigenous communities a great deal of authority already — or the substantial evidence that Indigenous communities are fully capable of working with resource companies on major projects.

Some worry that the government’s endorsement of UNDRIP will spark a legal onslaught as Indigenous groups rush to the courts to secure the practical implementation of UNDRIP rights. But government and Indigenous groups can head off many of these potential legal conflicts by working collaboratively to identify policy priorities and implementation plans.

Indigenous peoples in Canada have been the targets of government policy since Confederation and have become astute and passionate critics of government plans. UNDRIP provides an opportunity to turn the page on generations of colonial policy-making.

Bringing Indigenous peoples into the co-production of policy and joint priority-setting will demonstrate that the nation’s commitment to UNDRIP is strong and serious. It also will show that Indigenous people have finally been welcomed into the Canadian political community — as shapers of national policy instead of supplicants pleading for government attention.

This would be a major and powerful outcome of UNDRIP — and a game-changer for the management of Indigenous affairs in Canada.

Ken Coates is a Senior Fellow with the Macdonald-Laurier Institute (MLI). Blaine Favel is Chancellor of the University of Saskatchewan and former Grand Chief of the Federation of Saskatchewan Indian Nations. They are the authors of a forthcoming paper on the UN Declaration on the Rights of Indigenous Peoples.