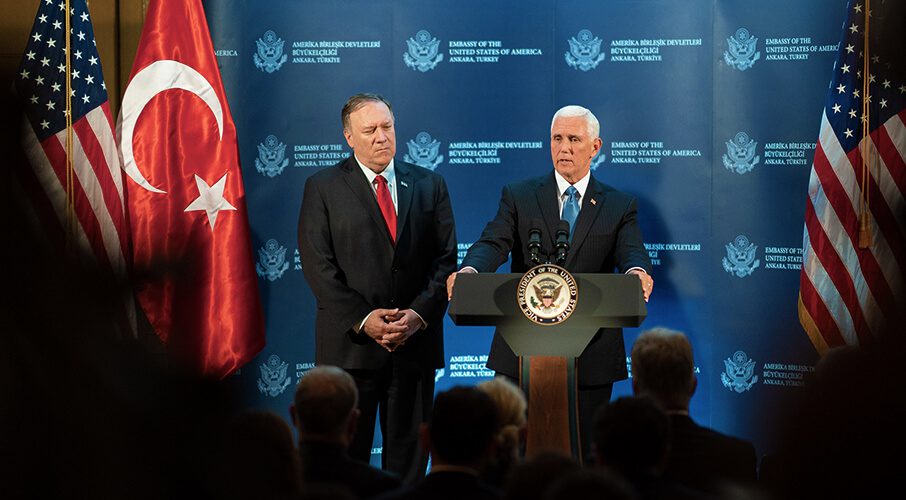 US President Donald Trump’s arrival in the White House caused apprehension in Tehran because of his criticism of the nuclear deal with Iran, the Joint Comprehensive Plan of Action (JCPOA). Washington’s plan to help Saudi Arabia provide a counterpoint to Iran, including talks about a “Middle East NATO,” added to the anxiety. In May 2018, when the United States pulled out of the JCPOA and imposed sanctions, the gloom in Tehran only deepened. Despite public defiance and brave talk about the “economy of resistance,” a reference to creating a self-sufficient economy, Ayatollah Khamenei and top commanders of the Islamic Revolutionary Guards Corps (IRGC), were deeply concerned about the future.

Following a highly contentious debate on how to respond to the American challenge, an extreme hardline faction of the IRGC-Quds Force (IRGC-QF) apparently won the argument. In April 2019, Khamenei fired Ali Jafari, the IRGC veteran commander who counseled restraint against the United States and appointed the hardline Hossein Salami instead. Salami wasted little time in implementing the policy of ‘if Iran cannot sell oil, no one else would,’ a shorthand for striking oil exports in the Gulf. Drawing on the long-standing IRGC’s maritime irregular warfare plan, Salami sought to disrupt traffic in the Straits of Hormuz and beyond.

Starting in May, the IRGC Navy Special Force (NEDSA) attacked four vessels in the Sea of Oman off the coast of the Emirate of Fujairah and seized two ships traversing the Straits of Hormuz. On June 20, the Guard’s Missile Unit, the Sepahe Moshaki, shot down a $220 million Global Hawk Broad Area Maritime Surveillance drone (BAMS-D). Washington’s failure to respond to the provocation was a tremendous boost to the hardliners, who took to calling Trump a bozdel (chicken heart), a Persian term for a coward. Having paid no cost, on September 14, 2019, Iran launched a spectacular attack on the Saudi Abqaiq and Khurais oil facilities, which knocked out five million barrels a day of crude production, approximately half of the country’s output or five percent of global oil supply.

Even some of the hardlines braced themselves for a reaction, recalling that in May 1988, Ronald Reagan launched Operation Praying Mantis during which the US Navy hit several targets in response to Iranian mining of the Gulf. However, except for a limited cyber attack on the Iranian propaganda network, Trump’s lack of action cemented the opinion that the American president was a paper tiger and a mentally unstable buffoon to boot, an image popularized in numerous cartoons and social media.

Much as the bold actions of the IRGC advanced the regime’s vision of regional hegemony, it was Trump’s decision to abandon the Kurds that was a true gift. After the Turkish invasion, the Kurds appealed to Bashar al-Assad for help, prompting the Syrian Army to move to Rojava, the administration of North and East Syria (NES). Exhausted by years of fighting, the Syrian Army relies on the support of Russia, the Shite militias commanded by the IRGC’s Qasem Suleimani, and Hezbollah. In the hope of securing Rojava, some 30 percent of Syrian territory, the Iranians have been busy creating new locations for their “land bridge” to Lebanon, a route devised to ship supplies to Hezbollah and evade sanction by importing through the port of Latakia.

Geopolitics aside, the abandonment of the Kurds played into the narrative that the United States was a highly unreliable and even treacherous ally capable of stabbing its loyal partner in the back. Kayhan, the mouthpiece of Khamenei, noted that “no one trusts Trump, even Israel, and Great Britain,” and warned that “Trump will leave the US allies alone in the nick of time.” Another paper wrote that “Trump’s dealing with American allies has proven that he does not adhere to any written or unwritten agreement and sacrifices everything for his own gain.” As a result, partnering with Trump is a strategic mistake, “which would bring no fruit.”

There are some indications that the Saudis came to the same realization. On September 29, Crown Prince Muhammed bin Salman declared that he did not believe in military action and would prefer a political solution, a sharp contrast from his earlier proclamations. Significantly, Saudi Arabia decided to seek support from Russia, which, by stepping into the American-made morass in Syria, bolstered its image as a stable and reliable player in the Middle East. On his recent visit to the Kingdom, Vladimir Putin signed economic agreements worth two billion dollars. In turn, Moscow may mediate between Riyadh and Tehran, paving the way to a new regional compact likely to include Iran as one of its stakeholders.

It is too early to know whether the Saudi pivot to Russia signals a realignment in the region away from the United States. Indeed, the contours of the new reconfigurations would not be known anytime soon. Nevertheless, one thing is already evident. Because of Trump’s foreign policy decision, the loss of trust in American leadership would be hard to repair, giving the Iranian regime another opportunity to advance its revolutionary vision.

Ofira Seliktar is Professor Emeritus of Political Science at Gratz College, USA. Farhad Rezaei is a member of the Association for the Study of the Middle East and Africa (ASMEA) in Washington, DC. They are the authors of Iran, Revolution, and Proxy Wars (New York: Palgrave Macmillan, 2019).

Why Canada Should Pay Attention to the Middle East: Balkan Devlen for Inside Policy

Is Beijing sticking its nose into the election campaign in Markham? Marcus Kolga in Maclean’s

Is Beijing sticking its nose into the election campaign in Markham? Marcus Kolga in Maclean's