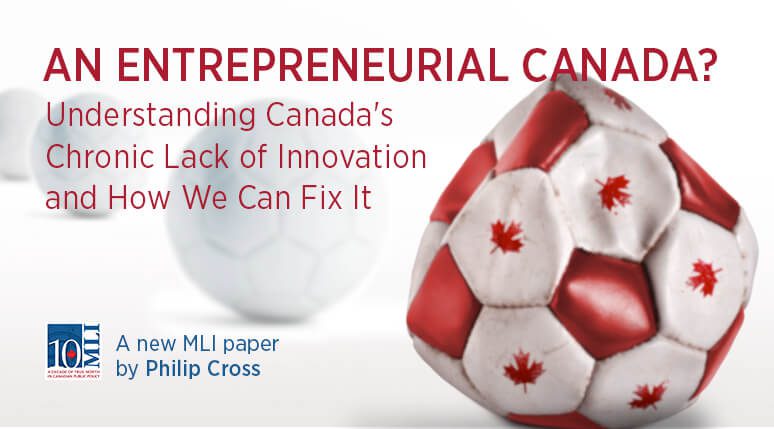 OTTAWA, ON (September 15, 2020): As the Canadian economy recovers from the devastation wrought by the COVID-19 pandemic and subsequent lockdown, Canada’s ability to return to normal quickly depends upon our ability to lead as innovators. Yet we also face a significant hurdle to achieving a full recovery – namely, Canada’s persistent lagging when it comes to innovation.

In MLI’s new report, titled “An Entrepreneurial Canada? Understanding Canada’s Chronic Lack of Innovation and How We Can Fix It,” Munk Senior Fellow Philip Cross makes the case that Canada’s failure to foster innovation comes down to a failure to embrace “creative destruction” – that is, the process of economic transformation whereby the old systems and structures of the economy are destroyed as new systems are introduced.

“Innovation disrupts the established order. Therefore, it flourishes in societies open to new ways of thinking and doing things,” explains Cross. However, to that end, Canadian governments and society have not built “a culture more tolerant of ‘creative destruction’ and supportive of entrepreneurs and business innovation.”

“Canada’s leaders lavish praise on our bloated and pampered public sector and shelter many rent-seeking businesses from competition, while deprecating many businesses in our resource and manufacturing sectors which have to compete on the global stage.”

While innovation can be hard to quantify, its benefits are hard to overstate. For many economists, innovation is the fundamental force driving economic growth. Yet, as innovation is inherently disruptive, policy-makers in Canada have been eager to protect what exists rather than allowing entrepreneurs to upset the status quo. This protection of the old ways of doing things stagnates our economy.

Moreover, Canada’s approach misconstrues research investment for meaningful innovation. While Canada is a major investor into R&D, this investment is too infrequently commercialized and so ideas are not meaningfully contributing to our innovation economy. Government investments are rewarding effort over outcome. This falls into a pattern of government-led attempts to foster innovation which, both domestically and abroad, largely fail to create the conditions that actually catalyze innovation.

Instead, Cross argues that Canada needs a cultural shift. He writes that, “without policies that cultivate a culture that welcomes, nourishes, and rewards entrepreneurship, isolated government attempts at ‘innovation policy’ are doomed to failure.”

Rather than propping up industries on the basis of ideology or political expediency, Cross suggests that Canada would do well to let businesses rise and fall on the merit of their ideas and innovative capacities. Ottawa also has a role insofar as it can create an environment that supports business creation and new firm development which often are driving forces behind innovation and economic growth.

“Canada can use this period of upheaval to renew and grow its economy,” explains Cross. “However, taking full advantage requires the cultivation of a more entrepreneurial mindset in our culture, a long-overdue shift.”

To learn more about how Canada can work to resolve its innovation deficit, read the full paper here.

Speaking for Ourselves – Shuvaloy Majumdar on Tonight with Jamil Jivani