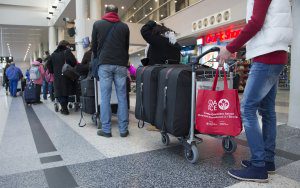 Recent data show that average earnings of refugees from select countries caught up to economic and family class migrants over time. The challenge is to determine how to make that the case for the rest, writes Emilio Rodriguez.

Today is World Refugee Day, a celebration of the courage and determination of those who are forced to flee due to violence and persecution. This year, it happens to coincide with news of record displacement numbers detailed in a recent United Nations report. The global population of forcibly displaced increased by 2.3 million people in 2018, and by the end of the year, almost 70.8 million were forcibly displaced worldwide as a result of persecution, conﬂict, violence, or human rights violations.

But it is not all bad news. The report recognizes that Canada resettled more refugees than any country in the world in 2018. Of 92,400 refugees who were permanently resettled in 25 countries, Canada took in just over 28,000.[1] This impressive record — essentially 30 percent of global refugee resettlement — exemplifies our collective generosity and commitment to helping the world’s refugee population.

But it is not enough to merely resettle them here. We need to ensure that we are creating the conditions for them to integrate into the Canadian economy and have access to broad-based economic and society opportunity. The truth is there’s further work to do in this regard.

Perhaps the most important outcome for refugees in Canada is to successfully enter the job market. Employed refugees achieve self-sufficiency for their families and contribute to the economy by paying taxes and spending money on housing, transportation, and consumer goods.

Canada’s economy has benefitted from solid gains in the size of the labour pool, due largely to immigration. Over the past two decades, real gross domestic product (GDP) per capita, productivity and the labour force have all increased by around 1.25 percent per year. Given that the economic integration of refugees is so important for the Canadian economy and for the refugee families, it is necessary to ask: How is Canada performing? Are we enabling them to find work and opportunity?

Answering these questions requires a brief primer on immigration in Canada. There are essentially three immigration streams: economic, family class, and refugee. Economic immigrants enter the country through the points system. These are people who are actively chosen based on their education, skills, and experience to contribute to Canada’s economy. Family class immigrants are sponsored by family members who reside in Canada. Refugees are selected based on legal criteria following a refugee status determination process. Those granted refugee status must be out of their country of origin and forcibly fleeing persecution on one of the grounds stipulated in the 1951 Convention on Refugees, or in relevant subsidiary refugee law. The current immigration mix (for 2017) is roughly 59.26 percent economic, 30.7 percent family class, and 10 percent refugees.

A general assumption is that immigrants who enter via the economic class contribute to economic growth, and the other categories are driven by family reunification or humanitarian considerations and thus have little to no contribution to Canada’s economy. The evidence shows that this assumption is not entirely correct. Although refugees are not admitted to Canada through a point-based criterion, many make economic contributions that are comparable to those of economic and family class immigrants, especially after their first decade in Canada.

A study released on March 2019 by Statistics Canada tracks data related to the labour outcomes of refugees from the 13 countries or groups of countries with the largest inflows to Canada over the 1980-to-2009 period. These include Afghanistan, China, Colombia, El Salvador, Ethiopia, the countries of the former Yugoslavia, Iran, Iraq, Pakistan, Poland, Somalia, Sri Lanka, and Vietnam, Cambodia and Laos (the three countries as one group). The results of the study paint a complex picture.

Of course, this does not mean there is no work to do in order to improve the conditions for refugees to participate in and contribute to Canada’s economy. But it is a reminder that refugees can and do contribute. Canada perceives economic-class immigrants as fundamental to its economic growth – and rightly so. Through the point-based system, Canada is able to attract highly skilled labour. What the numbers of this study suggest is that refugees also have the capacity to boost economic growth, especially in the long term, as their participation in the labour market reaches the levels of economic and family class immigrants. The narrative around refugees should evolve and recognize the evident economic contributions of these groups.

While the numbers are commendable and support the argument that refugees deserve credit for their degree of market participation, challenges in this area abound. The study by Statistics Canada shows a very different story for refugees in the five lowest earnings groups (i.e., from Iraq, Somalia, Afghanistan, Pakistan and China). Even after 15 years in Canada, they earned from 50 percent to 70 percent of what family-class immigrants did, approximately 46 percent compared to economic migrants, and roughly 50 percent of what the refugee groups with the higher earnings did.

Differences in observable human capital characteristics, economic conditions and the program of entry to Canada explained either none or very little of the much lower than average earnings of the refugee groups with the lowest earnings. Possible factors related to the in-Canada experience of these refugees, which were not analyzed in the study, include: the acquisition of official language skills, the acquisition of occupational training, work experience in Canada, support received from ethnic communities in Canada, and willingness to move to find a job.

Indeed, refugees face strong obstacles on all fronts, starting from the atrocious circumstances that forced them to flee. The focus of policy-making and public discourse should be in recognizing the valuable economic contributions of refugees and working to tackle the obstacles that deter many of them from better labour outcomes. Availability of language and occupational training, and access to relevant work experience should be strongly emphasized. What happens from the moment they arrive to Canada matters a great deal – it can make the difference in their chances to join other immigrant groups in becoming prosperous contributors to Canadian society.

Emilio Rodriguez is a Summer Fellow at the Macdonald-Laurier Institute. He was selected for the Values and Capitalism Young Scholar Award by the American Enterprise Institute in Washington DC, producing research on refugee protection in Mexico.

[1] This number refers to refugees who were permanently resettled. It pales in comparison to the number of refugees that are temporarily hosted in countries like Turkey, Pakistan and Uganda, who have 3.7 million, 1.4 million and 1.2 million refugees respectively.

Who Stands to Gain from the New Tanker Wars in the Persian Gulf?: Farhad Rezaei for Inside Policy