in Columns, In the Media, Inside Policy, Latest News
Reading Time: 4 mins read
A A 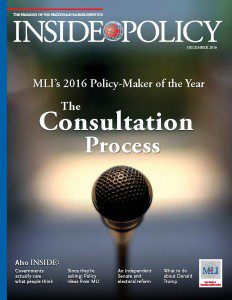 The public can be cynical when government holds consultations. However, the fact that Prime Minister Justin Trudeau’s government is consulting on so many files could mean the Liberals sincerely want to form policy based on what Canadians think of the issues.

It was October 1994 and then-Finance Minister Paul Martin sat before the House of Commons Standing Committee on Finance to deliver the country’s first economic and fiscal update. With television monitors perched on either side displaying charts that detailed the country’s imminent descent into fiscal chaos, he put on a master class in the art of insistence. Leaning into the microphone, he committed to halt Canada’s addiction to deficits, “come hell or high water”.

It was a promise he kept when, four years later, Martin delivered the country’s first balanced budget since the 1960s. His emphatic 1994 committee appearance is remembered as the first step toward that success. But what most people forget is that it was all part of a consultation.

Hopefully, this slight segue into history serves to beat back some of the cynicism that envelops a word – consultation – that, for many, has become synonymous with inaction. And not without reason. In government, the saying goes that if you can’t solve a problem with policy, then fix it with process. And when governments say “process” they typically mean consultations – long, windy consultations that smother a problem in study until it’s been happily forgotten.

That’s what critics of the Trudeau government suggest is happening right now. At last count, our new government is undertaking somewhere between eight and 80 splillion consultations. On national security. On the coastal fishery. On international assistance. On innovation policy. On defending the country from an orange-dyed zealot to the south (that last one hasn’t been officially announced yet). The list goes on and on.

To some, the sheer number of these consultations is maddening. They see it as evidence that the Trudeau government is unwilling to take a stand or that it’s preoccupied solely with appearances. It’s an odd complaint.

Was Trudeau indecisive on CPP reform? Or in championing a carbon tax? Did the Kinder Morgan approval strike people as weak-kneed? The guy can hardly be accused of leading from behind.

So if it’s not a lack of willingness to champion tough positions, what is the explanation for all these listening tours and confabs? Why bother?

Four possibilities jump to mind. Four reasons that this government – or, for that matter, any government – might be inclined to consult.

First, to reorient a policy course set by the previous government. This is happening everywhere in today’s Ottawa – and if you find that surprising, then frankly, you’re a bit dim. Most new governments do the same upon taking power. For example, recent consultations on transport policy resulted in a set of proposals that effectively ploughed over work done by a special panel operating under the Harper government. In this case, the consultations were a necessary move to step away from recommendations the new government disliked and rechristen advice that it welcomed. Sure, it took a year. But substantive work has been done and consequential decisions have been taken. Definitely not a waste of time.

Second, to strengthen stakeholder and public support for a policy the government already knows it wants to pursue. This approach is perhaps the most common and many of the consultations Mr. Trudeau currently has underway fall into this category. Outreach is being used to refine platform commitments, gather stakeholder input, fashion support, and provide a pathway toward successful implementation. As testament to the fact that it has been ever thus, this approach also fairly well describes Martin’s pre-budget consultations in 1994. Martin knew what he wanted to do by the time he sat down at that committee hearing. The consultations became a tool to persuade and prepare the public for pending action. And they worked.

Third, to sincerely canvass opinion and shape new policy direction. Although most consultations position themselves in this vein, it’s precious few that actually fit the bill. Many critics would say that the recent consultations on electoral reform were devised cynically to fashion a pre-ordained outcome. That’s not my impression. To the contrary, it looks to me like the government has been genuinely unsure of how it wants to proceed – and probably remains that way. These kinds of consultations are usually typified by fear or agnosticism – meaning that the subject matter either slightly scares or slightly bores the government. In such a situation, consultation is used to gauge risk and test attitudes.

Fourth, to snow something under. This is what most skeptics assume all consultations are about but, in truth, it’s relatively uncommon. When a government invites study and outreach only to throw the results down a well, it must do so in full public view. That invites a measure of risk. My guess is that some of the consultations currently underway will deliberately or not deliberately end up in this column. But they are fewer in number than most cynics suggest. I can recall being associated with only one pure example of this kind of consultation during my time in government – and I’m too embarrassed to list it by name.

The takeaway for fair-minded observers is that when governments ask for your opinion, more times than not, they actually want it. Certainly, for a new government like Mr. Trudeau’s – one that’s seeking to condition expectations, shape its agenda and build consensus for decisions to come – consultations are a smart, even necessary tool.

None of this will stop the cynics from crying foul. For some reason, the notion that governments might consult for legitimate purposes is met with instinctive resistance. Who knows why? Perhaps we should appoint a blue ribbon panel to examine the matter more thoroughly.

Scott Reid served as communications director for Paul Martin when he was finance minister and was later deputy chief of staff to Martin when he became prime minister. He is co-founder of the speechwriting company Feschuk-Reid.