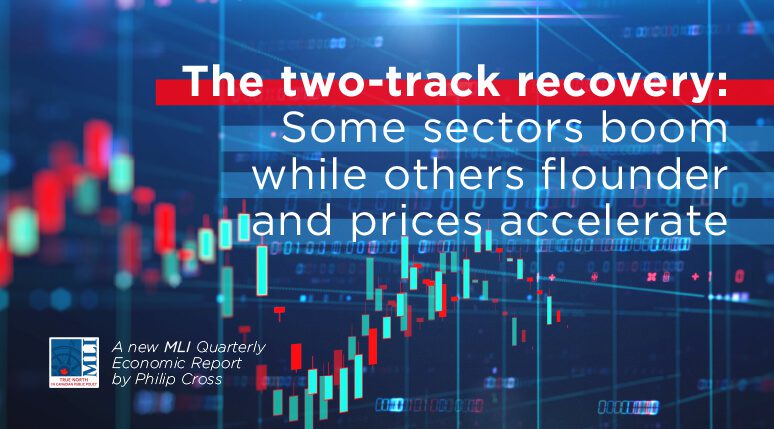 OTTAWA, ON (June 23, 2021): While Canada’s economy seems to be recovering from the COVID pandemic, data from the first quarter of 2021 show that this growth is occurring at an uneven pace. And even more concerning, inflation continues to surpass expectations while misdirected stimulus efforts do little to aid floundering industries.

In MLI’s latest Quarterly Economic Report titled, “The two-track recovery: Some sectors boom while others flounder and prices accelerate,” MLI Munk Senior Fellow Philip Cross delves into how Canada’s economy has recovered so far. Despite a booming housing market and a strong natural resource sector, the recovery has been impeded by government mandated closures across various industries in order to control COVID-19. A lagging vaccine roll-out early in the year has further dampened a speedy return to normal.

Despite staggering levels of fiscal and monetary stimulus to the overall economy, some personal and business service industries have struggled to recover. These industries have difficulties adapting to social distancing measures, a problem that could not be addressed by low interest rates or massive deficit spending.

In this context, “it is readily apparent that broad monetary and fiscal stimulus is of limited use in an economy where most industries are prospering but a select few continue to lag,” writes Cross.

He argues a more sensible approach is to scale back on economy-wide stimulus, and instead provide direct aid to easily-identifiable sectors where demand is structurally impaired. This would help to reduce the upward pressure on prices that is being observed in various sectors while also targeting assistance to those sectors that need it most.

Cross also notes that consumer price inflation in April exceeded the consensus forecast of economists. In April, the consumer price index (CPI) rose by 3.4 percent, the highest year-over-year reading since September 2011. These results reflect both the chronic difficulty economists have forecasting and the impact of boosting demand while supply remains disrupted by shortages of key inputs ranging from semiconductor chips to labour.

According to Cross, “economists simply have little understanding of how an economy performs in a pandemic.” Given these supply shortages, official statistics probably have understated inflation, which will likely continue to rise this year due to soaring costs of commodities and housing.

Rather than adapting policy for this new economic environment, decision-makers appear to be drawing lessons from the financial crisis for managing the aftermath of the pandemic and economic recovery. Finance Minster Freeland has quoted Treasury Secretary Janice Yellen in saying the lesson of the slow recovery after the 2008-2009 financial crisis was that fiscal stimulus was withdrawn too soon.

This, however, is debatable. As Cross notes, countries like Germany and Canada had above-average rates of recovery despite withdrawing stimulus quickly after the great recession. Moreover, while financial crises have a depressing effect on future long-term growth, Cross argues that this is not what has been observed in the wake of the pandemic.

Compared to the 2008-2009 financial crisis, the pandemic seems to have had a much less lingering impact on the macroeconomy, and growth is rebounding quickly in most sectors. “Therefore, maintaining a high level of stimulus risks raising demand above what the economy can supply without fuelling higher prices,” concludes Cross.

To read the full report, click the button below.

***
Philip Cross is a Munk Senior Fellow at the Macdonald-Laurier Institute. Prior to joining MLI, Mr. Cross spent 36 years at Statistics Canada specializing in macroeconomics.