Inside Policy, March 2018: Canada and Trade: Can we live without NAFTA? 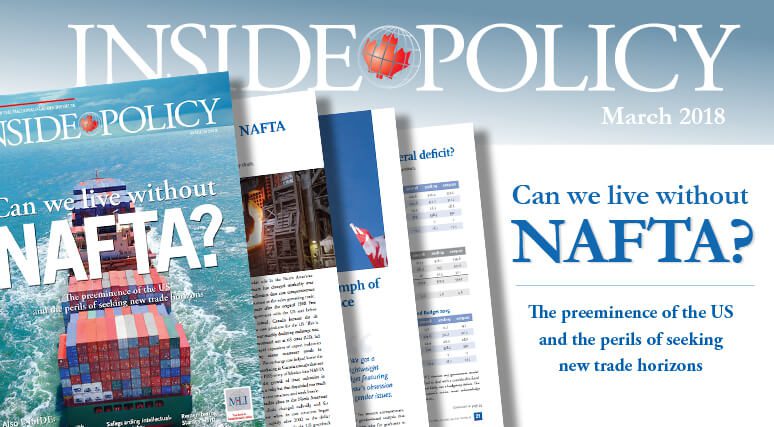 OTTAWA, ON (March 26, 2018): MLI’s 2018 Canada-US dinner was a tremendous success. It could not have been timelier, given that so many are asking the question on the cover of this month’s issue of Inside Policy: Can we live without NAFTA?

US Congressman Pete Sessions, one of the headliners at the dinner, writes in this issue that we may not have to. He makes clear that despite the rhetoric from the Trump administration, Canada has friends in the US Congress.

And while NAFTA is in question, the preeminent importance of Canada-US relations goes beyond any trade deal. MLI  Senior Fellow Stephen Blank and Monica Gattinger remind us Canada and the US don’t just trade with each other, we make things together.

China is often represented as a potential replacement market. Yet, as Andrew Pickford notes, Australia’s experience with China shows the possible dangers. Instead, it might be prudent to look to countries like Taiwan with more similar democratic systems and outlooks – a point raised by Dean Karalekas.

It is with great sadness that we mark the passing of one key architects of Canada-US trade and a great friend of the Macdonald-Laurier Institute, Stanley Hartt. This issue contains a tribute to Mr. Hartt by MLI Managing Director Brian Lee Crowley, lamenting the passing of one of Canada’s greatest public policy minds.

Beyond trade, this issue includes insightful articles on dealing with hostile countries like Vladimir Putin’s Russia, how governments can reduce deficits and support business investment, the importance of economically empowering Indigenous peoples in Canada, and defending intellectual property rights in Canada.

Why Canadians are losing confidence in the open market: Speer on BNN