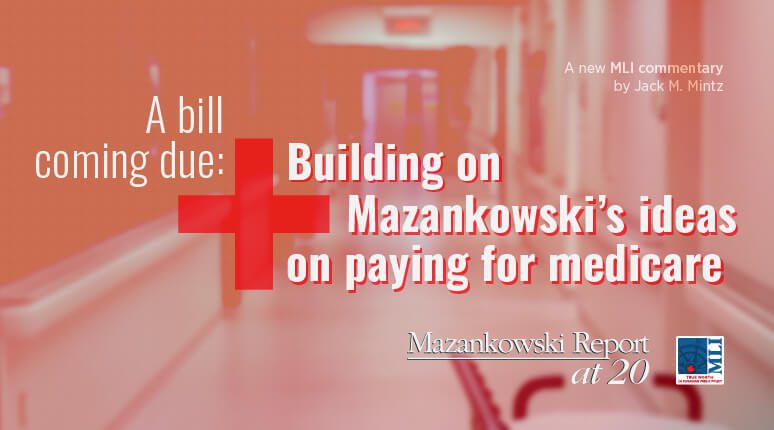 According to one of Canada’s foremost tax experts, Jack Mintz, the way Canada pays for medicare is unsustainable. Rather than continuing to ration care, a new approach to health care funding is needed.

OTTAWA, ON (January 26, 2022): Throughout January, Canadians have been confronted with the fact that our health care system is in dire need of reform. As costs rise and care becomes more rationed, what can be done to right the sinking medicare ship?

MLI has highlighted how the Mazankowski report, released 20 years ago, offers possible solutions to this challenge, though misplaced affection for our under-performing system has stymied reform efforts.

In the final installment in this series on the Mazankowski report, titled “A bill coming due: Building on Mazankowski’s ideas on paying for medicare,” MLI Distinguished Fellow and one of Canada’s foremost tax experts, Jack Mintz, argues that we need a better system for funding health care. The current model is unsustainable and must be reformed if Canada is to have any hope of getting out of the business of rationing access to care.

“Health care is funded in Canada largely by general government revenues,” notes Mintz. This is a stark contrast to other better performing systems such as those in Japan and Germany. With a lack of incentive-based mechanisms or new revenue sources contributing to funding, Canada’s health care costs grow faster than the government’s ability to foot the bill.

The Mazankowski report first identified this challenge 20 years ago and proposed a range of solutions. Yet the intervening two decades have seen “little change in the sources used to fund health care expenses,” argues Mintz. In this commentary, he examines a range of potential options for reforming health care funding.

To generate new revenue, Mintz finds that a dedicated sales tax would be fairer and more equitable than other approaches, particularly with tax credits for low-income earners and exemptions for necessities.

As well, given that health care expenses are most often age-related, encouraging savings against future expenses is necessary. Mintz argues that a social insurance fund, similar in nature to the Canada Pension Plan, could be introduced to help better match funding to future needs. He prefers the introduction of a variable premium based on a user’s ability to pay, which would introduce incentives and raise revenues without harming low-income earners.

Finally, by taking the myriad of federal and provincial tax relief measures for health-related expenses and restructuring them as a refundable medical expense credit, Mintz suggests that tax supports can be applied more flexibly for those who need them most.

“The Mazankowski report developed innovative approaches to raising new revenues to fund health care,” writes Mintz. With its recommendations in mind, Canada’s federal and provincial governments should “pay more attention to two issues: the mix of general and incentive-based levies used to fund health care and the establishment of a fund to cover future health care costs.”

Mintz’s contribution is the third and final installment on a series reflecting on the 20th anniversary of the Mazankowski report. Read the other commentaries in this series here:

Jack Mintz is the President’s Fellow at the University of Calgary’s School of Public Policy and a Distinguished Fellow at the Macdonald-Laurier Institute.