Economic growth, not wealth transfer, should be focus of 2015 budget: Cross on CTV 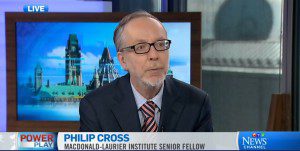 Cross appeared on the program Power Play to discuss his most recent paper for MLI, which sheds light on how government transfers are combining with taxes to transfer wealth between Canadians.

In including transfers, Cross is able to show that large wealth transfer takes place between those with high-incomes to others in lower tax brackets.

“I think we’ve exhausted what we can do with the tax and transfer system in this country”, Cross told CTV.

“I think if we’re going to support middle class income growth, we need to get the economy moving again. We’re going to do that through things like lower taxes, less regulation, more free trade”.

Cross also discussed more in-depth what the government is likely to do in releasing the federal budget, which is set to be tabled next Tuesday, April 21.

To watch the episode of Power Play featuring Philip Cross, click here (note: the episode is behind a paywall).