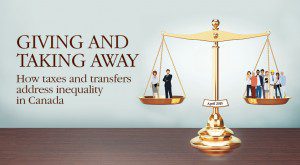 OTTAWA, April 16, 2015 – Calls for greater wealth transfer between high and low-income Canadians are louder than ever in a heated public debate about income inequality. But the debate has almost completely focused on tax rates, when in fact transfers have a much greater effect on reducing income inequality.

In a new paper for the Macdonald-Laurier Institute, Senior Fellow Philip Cross reveals that Canada’s system is already more progressive than many Canadians think, and is becoming more progressive over time.

By analysing both direct income taxes and government transfers – such as old age pension and employment insurance – Cross shows that high earners are already heavily subsidizing the incomes of the middle and lower classes.

The paper, titled “Giving and Taking Away: How taxes and transfers address inequality in Canada”, breaks down Canadians’ incomes into five groups of 20 percent, or “quintiles”.

It shows that people in the bottom three groups receive more money from the tax and transfer system than they gives up.

“This analysis shows that transfers from government constitute over half of all incomes in the bottom 20 percent of households and nearly one-quarter of income for the second lowest group”, says Cross.

The analysis also throws cold water on the idea that the government should transfer more wealth to the middle class. Cross shows that two of the three middle income groups (a rough proxy for the middle class) already get more than they give up.

“Transfers to the middle class have in fact increased faster than transfers to low income people”, Cross writes.

Cross notes that making the system more progressive would require even higher taxes on the wealthy, but there is little revenue to be gained from doing so. He recommends that the government focus less on wealth transfer and more on taking measures that improve the economy as a whole.

“Instead of focusing on modifying taxes and transfers to redistribute income, it would be better to adopt policies that boost market incomes for all classes”, he writes.