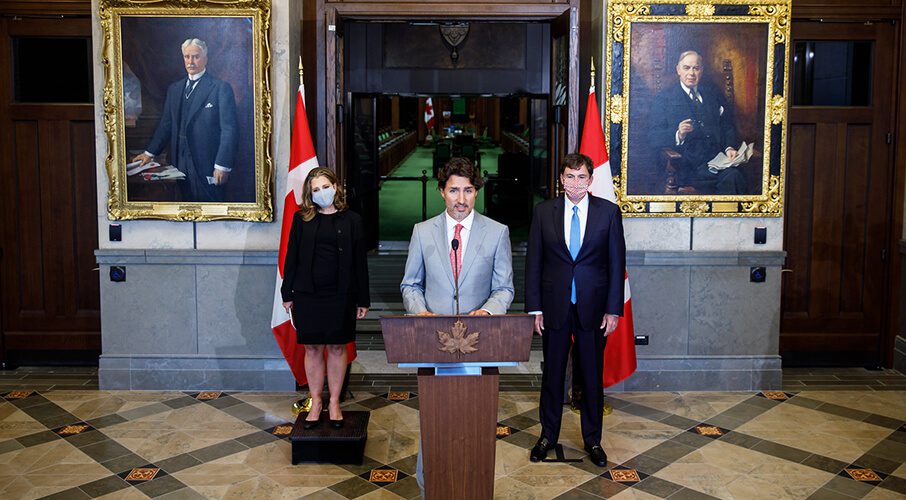 The circumstances we now face thanks to COVID-19 have laid bare the ambitions that progressives harbour, ambitions that would see them as the saviours of society who would initiate the operation to fix the issues they perceive as the most pressing. However, it is easier said than done to build a ‘shining city on a hill,’ writes Brian Lee Crowley in the Globe and Mail.

To hear the tale told by our current political leaders, the COVID-19 pandemic perfectly illustrates and vindicates progressives’ ambition to remake our society – to turn away from fossil fuels, launch a green recovery, wrestle prejudice to the ground, possibly create a permanent guaranteed annual income or “fix” our access to drugs or daycare – in short, to “build back better.”

It is not so easy, however, to create a shining city on a hill. If anything, the pandemic and governments’ response gives far more comfort to those who are skeptical and humble about what governments can actually achieve for us than it does to the adherents of the progressive creed.

The pandemic hasn’t revealed an all-wise governing class whose superior knowledge entitles them to “fix” Canada. Rather, COVID-19 has underlined the limits of technocratic expertise, the ignorance of governments and the fragility of social solidarity founded on a passing crisis.

Has technocratic “expertise” saved us during the coronavirus outbreak? It is not anti-science to observe there were lots of experts peddling their expertise everywhere, but it soon became evident that equally credible experts were often offering diametrically opposed advice. Some experts’ advice was followed in some places and it worked out well. Elsewhere different experts’ advice was followed with less impressive results. Some countries did well at specific points of the outbreak, not so well at others.

Policy makers were most emphatically not acquiescing in some widespread expert consensus. Mostly policy makers listened to people who happened to be at hand and sounded plausible. In the event their advice was sometimes correct, sometimes not, and sometimes simply neutral – neither helpful nor harmful.

The reality is we won’t know for some time, if ever, what the “right” response would have been; there are likely to be many possible “expert-approved” responses that turn out to be defensible, each characterized by a unique mix of strengths and weaknesses. When the next pandemic strikes, COVID-19’s “lessons” will be trotted out by the “experts” when the specific characteristics of COVID-19 may be more or less relevant. Our knowledge will again be partial and imperfect. Generals always fight the last war, because that’s where their expertise lies.

COVID-19 didn’t prove that powerful governments guided by dispassionate experts and science give us the “right” answers. Our own experts changed their minds repeatedly (think masks and home-testing kits), contradicted each other and adjusted course as new knowledge became available.

That last point is key. The default condition of humanity isn’t knowledge, but ignorance. No one, least of all government, has a godlike overview of all knowledge, even about something as clear and immediate as COVID-19. Yet the progressives’ vaulting ambitions rest squarely on claims to be able to fix our ills through the application of expert knowledge administered by bureaucrats under the leadership of wise politicians. In fact these knowledge claims are a complete fiction designed to make attractive a program of using political power to impose progressive designer prejudices on the rest of us.

Consider that the total stock of human knowledge is huge and growing at an accelerating rate. Or how many transformative knowledge breakthroughs happened not through design, but by accident, such as the discovery of penicillin, the telescope and steel-making. Finally, ponder how much of what we know is tacit, things we know how to do but struggle to explain to others in words. Comprehensive knowledge, on which progressives base their claim to govern, is a dangerous pipe dream, a mere pretense of knowledge.

Public health experts and epidemiologists and microbiologists cannot also be experts on the thousand other areas of expertise on which a robust response to a pandemic relies: how to make testing kits, manufacture vaccines, supply personal protective equipment, design tracking apps, run logistics chains or the thousand other things that are or may be needed.

No single laboratory, no matter how many experts they employed, was given the job of isolating the virus, analyzing it, discovering the best way to test for it, developing a vaccine, or testing all existing pharmaceutical products against the virus to see if any of them worked. Instead, resources intended to hasten the discovery of COVID-19-related knowledge were handed to many public and private labs around the world, who then produced a plethora of experimental solutions and relied on a steady stream of independent discoveries from other scientists. Researchers are in effect competing with each other to find the most effective medicines, vaccines or testing kits.

All of these things are necessary because of the partial state of our knowledge and because the much-vaunted expertise of those advising governments is impotent outside their extremely narrow area of knowledge – and is of limited use even there.

In every field, including pandemics, there is no single “right” answer as to what to do; instead there are competing answers and all of them are permanently subject to revision as we learn more about ourselves, society, the economy and the physical world. Different answers will suit different people better according to their character, circumstances and desires. Technical experts can give us a rather dated view about how to do what we want, but expertise has nothing to say about what we should want.

Yet progressives are always putting about the idea that if you knew what they knew, you would set aside your attachment to your petty desires and aims in life. Their superior knowledge licenses them to “fix” the economy, climate change, social programs, where and how we live, the distribution of jobs and incomes and status among arbitrary groups and more besides.

When we allow experts to impose their narrow understanding on the rest of us through political power, closing off the ceaseless experimentation that is the only real source of knowledge, we don’t become collectively smarter and better informed. We become collectively stupider because we are then only acting on the limited knowledge of people at the top, not the knowledge possessed by society as a whole, knowledge that is complex, widely distributed and unknowable in its entirety.

Thus the “patchwork” that so horrifies progressives, in which different people get different things in different combinations from competing suppliers, isn’t a poor second best, but demonstrably superior to public officials telling us what we are entitled to based on whatever fashionable expert opinion gives them a pretext to impose.

We have slowly and incrementally evolved a society that is the envy of the world. Canada is not a problem to be fixed, but a rich inheritance to be enjoyed and cautiously, incrementally adjusted to embrace new ideas and experiences. Our society is far more likely to be harmed than improved by a handful of ignorant politicians and bureaucrats thinking they know more about Canada than the generations of Canadians who built the successful institutions and practices that each generation has handed off, enriched, to its successor.

What about the alleged social solidarity engendered by the COVID-19 crisis? Could it be used to resolve a host of other issues that seemed insoluble before?

Think about the experience of Britain after the end of the Second World War. Six years of rationing, shortages and helping each other out inspired the Labour Party to promise to run peacetime society along similar lines. Their slogan in the 1945 general election? “And now – win the peace.”

War and peace, however, are not the same thing. In the war, victory was all. When peace arrived, however, people mostly craved a return to normality, where they made their own decisions about what mattered to them. “Social solidarity” was soon seen as licence for bureaucrats to order people around in accordance with other people’s ideas, mostly the “experts” who were going to fix society’s problems.

If it only took a year or two for the “spirit of Dunkirk” to become an increasingly irksome rallying cry, the response to COVID-19 will prove even more evanescent. Progressives love the idea that everyone else will drop their stubborn attachment to their selfish priorities and sacrifice their narrow vision for the “common good.” But what they usually have in mind is that the rest of us should give up what we want and pursue what they want instead.

In the future, this will be the great fault line separating Canadians politically. On the one hand will be those who say politicians should harness experts to “fix” Canada according to principles that appeal to progressives. On the other hand will be those who say such claims to superior insight into Canada and Canadians are in fact simply thinly disguised power grabs to impose progressive prejudices on people who have other plans for how to live their best lives. Politicians are in no position to second-guess either the institutions and behaviours that Canadians hold in great affection or the things that each of us have decided matter to us, our families and our communities. Canada was not imposed from the top down but built from the bottom up. It does not belong to the government. It belongs to Canadians.

Speaking for Ourselves – Kaveh Shahrooz on Tonight with Jamil Jivani

The Throne Speech we’d like to see: 13 big ideas for Parliament’s next session

The Throne Speech we’d like to see: 13 big ideas for Parliament’s next session