As China’s global actions worsen, Canada looks at its feet: Charles Burton in the Ottawa Citizen 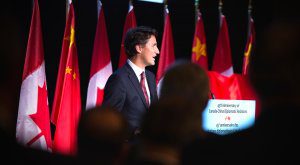 As the intimidation tactics rise, Canada continues to act like a pushover, writes Charles Burton in the Ottawa Citizen.

The past 10 days have been strewn with barbs for China’s corrosive engagement with the West. It began with China being elected to the UN Human Rights Council to further its agenda of “socialist human rights with Chinese characteristics.” The U.S. Secretary of State called this “a win for tyrants and embarrassment for the United Nations.”  (The Canadian government’s reaction: crickets.)

Then this week in Ottawa, the House of Commons Subcommittee on International Human Rights sparked a quick and angry retort from Beijing when it issued a statement saying the Chinese Communist Party’s program against Turkic Muslim Uyghurs does “constitute genocide.”

In a barometer of broader global opinion, the current cover story in The Economist — “Torment of the Uyghurs” — features an image of barbed wire over the stark assertion “the persecution of Xinjiang’s Muslims is a crime against humanity.”
Last week, Prime Minister Justin Trudeau said China’s “approach to internal affairs and global affairs is not on a particularly productive path for itself or for all of us.” Though this remark was more passive than warranted for crimes against humanity, Chinese Foreign Ministry Spokesman Zhao Lijian said Ottawa “had shown hypocrisy and weakness” in managing Canada-China relations. Chinese officials are incensed that B.C.’s Superior Court cannot find Huawei CFO Meng Wanzhou ineligible for extradition to the United States, where she would face serious charges, and Zhao complained about Canadian condemnation of China’s response as “coercive diplomacy.” Regrettably, many Canadians would concur with his “hypocrisy and weakness” characterization.
This doesn’t bode well for any effective rigour in Canada’s promised new China policy, to be announced before the end of the year. Of course, Ottawa’s decision of Huawei 5G was promised for before the last election, and the Government is still evidently awaiting an opportune moment to release it. Perhaps we will see a China policy that includes Huawei if the Liberals achieve a majority in the next election.

Earlier this month, a strong, principled and unscripted statement by Canada’s UN Ambassador, Bob Rae, apparently pushed China to cease withholding Canadian consular access to Michaels Kovrig and Spavor. (Could we make Rae fluent in Mandarin, and dispatch him as our Ambassador to China?)

In recent days, the Wall Street Journal reported that China is threatening to detain Americans in China and Hong Kong, after U.S. officials arrested several Chinese researchers working in American universities with access to sensitive technology data, whose visa applications failed to declare they are also members of China’s military.

This intimidation from Beijing matches Chinese Ambassador to Canada’s Cong Peiwu’s veiled threat to the “health and safety” of 300,000 Canadians in Hong Kong if Canada offers safe harbour to democracy advocates trapped in Hong Kong under threat of political persecution. Despite being given an opportunity to walk back his remarks, Cong stood firm. It begs the question: Exactly what does a Chinese ambassador have to do to be declared persona non grata in Canada? Threats to the safety of Canadians by any other nation’s ambassador would have them turfed within 48 hours. Cong was instead called in to Global Affairs Canada for a chat requesting that he play nicer in future.

Of course, the People’s Republic of China would expel Canadian Ambassador Dominic Barton in retaliation, but that might not be such a bad thing. The Chinese evidently see him as a pushover, and don’t return his calls. While Ambassador Cong is all over the Canadian media with interviews and webinars, our man in Beijing is a non-person.

At an event last week in China, Barton’s friends in the Canada-China Business Council enthusiastically applauded the Chinese vice-minister of commerce’s call for the release of Huawei’s Meng, but sat in silence at any mention of the Canadian hostages. Moreover, judging by his appearance at the Commons Special Committee on Canada-China Relations, Barton’s grasp of the non-business aspects of Canada’s interaction with the PRC is hazy, and disturbing.

Canada does not have any credibility speaking for justice, human rights and the international rules-based order if we do not start to do the right thing and stand up to China’s disgraceful bullying of us. It is time for a cross-party political consensus on this at least.

Charles Burton is a senior fellow at the Macdonald-Laurier Institute.

The Tragedy of the Commons: William Watson in the Financial Post

In government spending and deficits, we’re now No. 1 in the world: Jack Mintz in the Financial Post

In government spending and deficits, we're now No. 1 in the world: Jack Mintz in the Financial Post