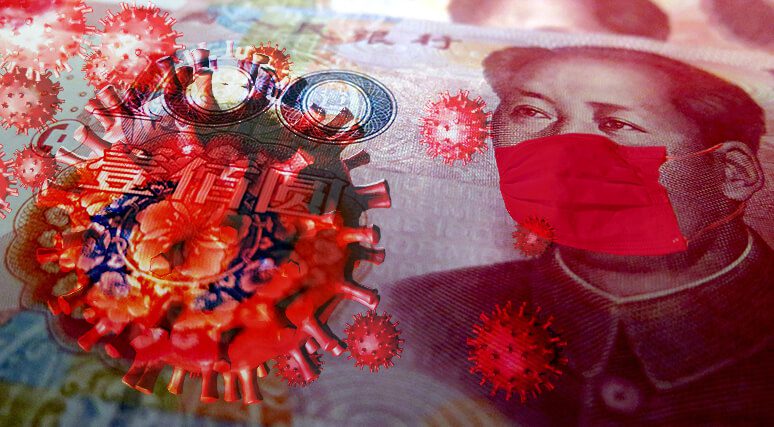 There is a good deal of evidence that China’s misinformation and mishandling of the initial outbreak in Wuhan contributed to it becoming global pandemic, breaching Articles Six and Seven of the WHO’s International Health Regulations which China signed and is legally obliged to uphold, writes Philip Cross.

The impact of the coronavirus has devastated Canada’s economy. Over three million Canadians officially lost their jobs in March and April alone, while another 2.5 million were not able to work at all or had much reduced hours. Overall, employment fell by 15.7 percent and hours worked by 27.7 percent. By early May, 7.8 million Canadians turned to emergency income support from the federal government.

The monetary loss for Canada has been enormous. In total, the Parliamentary Budget Officer projects nominal GDP income will drop 16.6 percent or $395 billion in 2020 due to the pandemic. This loss of income reflects a 4.5 percent drop in prices, mostly for commodity exports, and 12.1 percent less volume of output. The decline in annual real GDP is nearly four times larger than the next worst on record in 1982, even with the optimistic assumption of a sustained recovery in the second half of the year.

Meanwhile, the wealth of Canadians plunged at least $3 trillion at the end of the first quarter just from the 21.6 percent drop for stock prices, according to Statistics Canada. These losses were trimmed to about $2 trillion by a rebound in the stock market in the second quarter. The long-term impact on the value of other assets such as real estate and small businesses is not yet known. A $2 trillion drop in total wealth would be expected if the loss of wealth matches that during the 2008-2009 recession, when every other measure shows the 2020 recession is much worse.

All the monetary loss can be attributed to the coronavirus pandemic. Before the virus forced the shutdown of non-essential sectors, Canada’s economy was heading towards slow but steady growth in 2020. The Macdonald-Laurier Institute Leading Economic Indicator rose by 0.3 percent in February, its eighth straight monthly gain, with prices still rising for stocks, commodities and housing.

A number of observers have proposed seeking reparations from the Chinese government for all of this. There is a good deal of evidence that China’s misinformation and mishandling of the initial outbreak in Wuhan contributed to it becoming global pandemic, breaching Articles Six and Seven of the WHO’s International Health Regulations which China signed and is legally obliged to uphold. If we were somehow able to send a bill for the full economic damage, Canada would be justified in demanding at least $2.4 trillion of compensation from China.[1] This includes the $395 billion drop in GDP earned income, a figure confirmed by a similar expected increase in government deficits needed to provide temporary income support and absorb revenue losses. Add to that the $2 trillion of wealth destroyed by lower stock market prices.

The resulting damage to the nation’s finances is extreme. Government budget deficits exploded by about $400 billion from income support to Canadian households and businesses, plunging revenues from income, consumption and capital gains taxes, and soaring health care costs from the pandemic. The Parliamentary Budget Office projects the federal deficit rising from $24.9 billion before the pandemic to over $252 billion, not including the daily stream of new programs offered after April 24 which is why the PBO said “In all likelihood, the deficit will be higher.” The federal deficit will likely exceed $300 billion after accounting for measures taken in the last month, plus the cost of inevitable bailouts of provincial and local governments and sectors ranging from airlines to hospitality and seniors are added in. A complete accounting of federal finances also would recognize the increased cost of public pensions to taxpayers as asset prices nosedived.

Provincial government deficits are projected to total $89 billion, up from $25 billion before the pandemic according to Scotiabank Economics (RBC earlier forecast provincial deficits of $63 billion). Even this forecast is likely to be optimistic. For example, the Financial Accountability Office of Ontario predicts its deficit will reach $41 billion, double what the Government of Ontario or RBC Economics were expecting and more than Scotiabank’s forecast of $35 billion. The Federation of Canadian Municipalities forecast a collective shortfall of $10 to $15 billion over just the next six months, reflecting less revenue from transit systems and lower fees. This does not include potentially unpaid property taxes from the wave of bankrupt people and businesses that will not surface for months (people currently cannot file for bankruptcy because the courts are closed). Knowing that provincial finances already were stretched to the limit, cities made their appeal for help directly to the federal government.

This assessment of damages caused by the China’s coronavirus at $395 billion of income and $2 trillion of wealth is deliberately understated and limited to costs in 2020. Additional claims on China can be made when the long-term costs of the pandemic become evident. These include lowering Canada’s potential growth rate due to falling labour and capital inputs.

Canada’s human capital stock is being damaged by fewer immigrants and falling employment, especially for youths. Immigration into Canada has slowed to a trickle, removing what was virtually the only recent source of labour force and population growth. The impact is especially severe for universities, which rely on the higher fees charged for foreign students for up to one-quarter of their revenues. Historically, the rise in long-term unemployment that accompanies deep recessions leads to an erosion of skills and permanently lowers income for older workers and reduces lifetime income for youths just arriving on the labour market.

Meanwhile, investment in Canada’s physical capital is taking a massive hit as profits and the value of existing assets plunge, to the point that the very survival of firms in sectors such as airlines, retailing and travel is called into question.  Worse, many firms have had to undertake investments and changes to behaviour that are costly in terms of both time and money without generating any revenue (Home Depot alone estimates it will spend $850 million due to the virus). This implies a permanent reduction of productivity, just as the heightened security measures after the 9/11 attacks raised costs but not revenues.[2]

There is the direct cost of everything from installing plexiglass shields for check-out counters and assembly lines to delivering to customers at curbside or at home. The indirect costs of social distancing reflect that retail stores and restaurants will operate at reduced capacity for an indefinite period, lowering their revenues while their fixed costs of running a business remain the same. Inevitably, investments in urban transit and travel-related infrastructure in airplanes, hotels and conference centres will have to be written off as uneconomic in the new era of social distancing. It is a very open question how many jobs will be permanently lost as people shift to on-line banking, tele-commuting and working more from home.

No allowance has been made for the pain and suffering the virus caused for the over 5,000 Canadians it killed. Dying from the coronavirus was particularly painful both for victims who struggled alone for their last breath and for families who were barred from the death bed and ultimately the grave site of loved ones. Also ignored in this invoice to China is the added cost of other people dying because they could not receive needed care from hospitals. Nor is any estimate made for the inevitable social cost of lost jobs, incomes, savings, businesses and ultimately hope, which triggers more suicides, substance abuse, and family breakdown.

One of the few positive outcomes of the coronavirus is a long overdue questioning of some basic assumptions about our relationship with Beijing. China’s secretive and duplicitous handling of the original outbreak of the virus exposes the dark side of an authoritarian regime that Canada naively chose to overlook in return for access to China’s fast-growing economy. The small boost to our exports now looks trivial compared with the cost to Canada from China’s irresponsible refusal to inform its own citizens and the rest of the world of the outbreak in Wuhan late in 2019. Taiwan handled the virus best because it knew from experience not to believe the disinformation coming from mainland China and instead instituted restrictions on trade even before China officially admitted a pandemic was underway.

George W. Bush’s hope that China would become a “responsible stakeholder” when it joined the WTO in 2001 is in tatters. Beyond lifting the veil of China’s authoritarian regime to other nations, the Xi regime’s handling of the virus has to sow doubts among its own citizens. The delay in informing its population travelling to and from Wuhan early in the new year putting lives at risk shows just how little the regime values the life of its own people, just as Russia’s coverup of the Chernobyl nuclear disaster fully revealed to its own citizens how the regime’s instinct for self-preservation trumped the greater good of its citizens.

[2] One hidden cost of 9/11 was that an estimated 1200 to 1600 additional people died in road accidents due to an increase in the number of car trips taken in the year following because of a heightened fear of getting on an airplane.