A modern Conservatism for a modern Canada 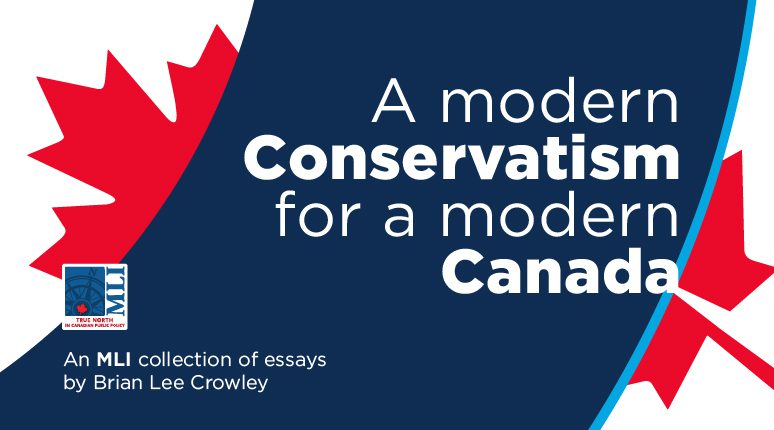 It is often said that free unsolicited advice is worth what you pay for it. That has never dissuaded those of us who toil in the think tank world from offering bushels of it; sometimes it has even proven valuable.

Public policy think tanks like the Macdonald-Laurier Institute are always on the lookout for ways to inject thoughtful policy ideas into the national conversation. Even though we are non-partisan, we recognize that the political parties are an important vehicle for policy ideas; moreover leadership campaigns are unique moments of intellectual ferment within Canada’s political parties, a chance to get ideas widely discussed and, perhaps, adopted.

That is why I saw the Conservative leadership campaign now underway as a perfect moment to reflect on the public policy ideas that we have at MLI that might help shape the thinking of both the candidates for the Tory leadership as well as of actual and potential members of the Conservative Party. This document is the result. Inside you will find nine articles. Each of them is a four minute read. You can get through the whole thing in about half an hour.

The first article, “Why Conservatives are grateful for the society we have,” was commissioned by the National Post a few years ago as the kickoff piece for a series they ran on the meaning of conservatism in Canada today. It points out that conservatism is not based on rigid ideology, but a sentiment of gratitude for the benefits that a well-functioning society like Canada confers on us every day.

Second is the piece I wrote to start the more recent series of op-eds that inspired this collection. In 2022, the National Post kindly accepted my idea for a series of pieces of advice to the aspiring Tory leaders. In it I laid out the case why the Conservatives have a moral and political duty under our constitutional system to offer an electable alternative to the government of the day. Indulging their boutique policy interests at the expense of that overriding objective is self-indulgent and deprives Canadians of real political choice.

Next in this National Post series was a piece laying out why jobs, opportunity and growth should be the bedrock of a Conservative economic policy in contrast to the left’s preoccupation with redistribution. I call for a formal commitment by the Conservatives to double the size of Canada’s economy within a few short years while also laying out a strategy to contain public spending without sacrificing public support.

No party is going to get a respectful hearing these days if they don’t take the environment and climate change seriously. Unfortunately, the Conservatives seem to have got it in their head that in order to take climate change seriously you have to endorse whatever extremist alarmism is fashionable on the left. This fifth piece in the National Post series makes the case for an adult policy on climate change that avoids alienating eco-minded voters but doesn’t require people set their hair on fire over contentious “climate emergencies.”

Reconciliation between Indigenous and non-Indigenous peoples in Canada is an issue that has seized the public imagination in Canada and is long overdue. Moreover, one of the Conservative’s greatest image problems with Canadians is that they “don’t care” about the poor, the weak and the vulnerable. The next piece in the National Post series thus made the case that the Tories could do well by doing good: “A pro-opportunity Conservative Party that embraced Indigenous Canada as a respected, necessary and welcome partner in unlocking prosperity would find a growing audience in the Indigenous world.” And they would change how Canadians feel about the party to boot.

The final installment in my National Post series starts like this: “Many Conservatives moan about the challenges of being a conservative party in a left-wing country, as if the deck was stacked against them by the electorate’s immutable ‘progressive’ beliefs. What if, however, Canada is a country with deeply held but non-ideological beliefs that are in many ways quite conservative but the Conservative Party constantly misjudges how to connect with those values? If this is correct, then Canada is not the problem. The Conservative Party is.” And where should the party look for inspiration if they think this analysis has merit? The success of the Saskatchewan Party.

It seemed to me that two other pieces, not part of the series for the Post, might nonetheless be of value to Conservatives and political observers in thinking about the place of a genuine conservative philosophy in Canada.

The first “bonus” article was a long opinion piece published in the Globe and Mail on the publication of my last book, Gardeners vs Designers: Understanding the Great Fault Line in Canadian Politics. This article is in a way a continuation of the op-ed about the meaning of conservatism that leads off this collection. Using governments’ response to COVID as a leaping off place, it lays out some of the reasons why conservatives are skeptical of governments’ claims to be able to “manage” something as complex as society or the economy, why “following the science” isn’t necessarily a recipe for rationality, and why faith in people’s experience and common sense often turns out better than letting “experts” rule.  Some will confuse this with “populism,” as if faith in people is somehow irrational. As you will find if you read this piece, or even better, the book, my argument is that excessive reliance on narrow “expertise” in the face of the complexity of society is in fact the irrational response.

Finally, the second bonus piece reminds Conservatives that the rule of law (much invoked but rarely understood in the context of the Freedom Convoy) is fundamentally a conservative value that touches the very core and essence of democracy. In my view, however, all the political parties in Canada, including the Conservatives, have damaged the rule of law by defending it only when its rigours might fall on their political opponents. The real test of your commitment to the rule of law is when you are ready, willing and able to apply it to your friends. Every Canadian political party fails this test.