Will a gun ban work in Toronto? No: Christian Leuprecht and David B. Skillicorn in the Toronto Star 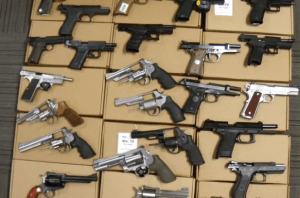 The guns used in GTA shootings are already illegal; making currently legal handguns illegal may make voters feel better, but will do little to change the pattern of gun violence, write Christian Leuprecht and David B. Skillicorn.

By Christian Leuprecht and David B. Skillicorn, September 11, 2018

Relatives and friends in the social network of criminals are still about 15 times more likely to get shot than “ordinary” people because they tend to be present when shootings happen. So-called “stray bullets” or domestic shootings are unusual, except for terrorism: 2 per cent of the population are the targets of 98 per cent of the shootings and this 2 per cent are targeted mostly because of their own criminal activity.

Earlier this summer a now discredited story by The Canadian Press spawned talk of making it harder to own handguns. This suggestion, however, is largely irrelevant. Canada borders the largest weapons market in the world.

It is no surprise, then, that two-thirds of the firearms seized and traced by Toronto Police have come across the border. In fact, you may have been an inadvertent mule yourself: smugglers seek out Canadian license plates in parking lots near the border, attach guns in a box with a GPS tracker under your car, and retrieve the guns from your driveway during the night.

A minority of guns used in crimes are “domestically sourced”; most are obtained lawfully by gang associates with clean records, only to disappear during “break-ins.”

For legal guns that disappear, placing the onus of responsibility for the loss of the gun on the owner would help: a reverse burden-of-proof provision would make any owner of a handgun an accessory to a crime in which their stolen firearm is used, unless the owner can demonstrate full compliance with all requirements of their Possession and Acquisitions Licence (PAL).

But the most effective way to contain gun violence is intelligence-led policing. When police concentrate on “hot spots” it has a disproportionate effect on reducing crime. Hot spots might be physical locations where many crimes happen, but there are also social hot spots.

Policing social hot spots is much more difficult. Criminals are homophilous — they prefer to work with others who are like them, often ethnic or family kin. However, this makes it difficult to disentangle a sensible law enforcement focus on particular groups from (claims of) racism.

Until 2017, carding (questioning individuals when no offence is being investigated) as part of the Toronto Anti-Violence Intervention Strategy (TAVIS) allowed GTA police to collect intelligence from suspected and known criminal gang members. When a shooting happened, police had better domain awareness to cross-reference aliases with names to determine the probable culprit.

In 2017, the previous Ontario government disbanded TAVIS, concerned about perceptions of racism and profiling; and the federal government had already done away with mandatory minimum sentences for gun violence. These political decisions come at a cost — since almost all shootings involve people connected in the criminal social network, not knowing the structure of this network slows down investigations and may reduce the rate at which incidents are cleared by police.

Bringing back carding and TAVIS may not be a solution per se: police services everywhere are struggling with a steep learning curve to leverage intelligence-led policing; to that effect, there is a pressing need for skill development and improved hiring practices.

Police chiefs and associations foretold the spike in gun violence; only Ontario’s unsuspecting public was caught by surprise. The guns used in GTA shootings are already illegal; making currently legal handguns illegal may make voters feel better, but will do little to change the pattern of gun violence.