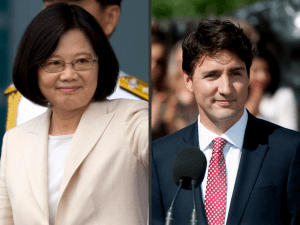 A growing number of states want to take concrete security steps to send a clearer signal to a China that has not responded to engagement and is taking increasingly risky action against Taiwan. It’s time for Canada to join them, writes Eric Lerhe.

Taiwan has faced a steadily deteriorating security situation, especially following the election of the more independence-oriented Tsai Ing-wen government in 2016. Since then, China has undertaken provocative military actions—from live fire exercises to “Island Encirclement Patrols” by its missile-armed bombers around Taiwan.

The United States has taken these threats quite seriously. Indeed, under the Trump administration, the U.S. has passed legislation allowing for U.S. naval port visits to Taiwan and senior military and government official visits, while exploring other ways to strengthen Taiwan’s armed forces and improve military-to-military ties.

Despite these developments, Canada’s timid approach to Taiwan remains heavily rooted in the past—a “One-China” policy designed in 1970, when the goal was to bring China out of isolation and sideline a Taiwanese dictatorship. The current situation is very different. China is now an economic powerhouse under an increasingly authoritarian and belligerent leadership, while Taiwan is a lively democracy with a vibrant economy.

When the Trudeau government voiced support for Taiwan’s inclusion in the World Health Assembly earlier this year, it made an important first step in loosening its otherwise rigid one-China stance. Canada would do well to expand on this initial step.

Security cooperation remains a particularly underappreciated avenue to strengthen Canada-Taiwan relations. The 1970 Sino-Canadian joint communiqué says nothing against security cooperation. Yet, despite the example of the U.S., France, and Japan, there is absolutely no Canadian contact or cooperation with Taiwan or with our allies on its security problems.

Canada is in a good position to pursue such cooperation. After a long pause, Canada has started to redeploy regularly to the Western Pacific with naval ship patrols and a six-month submarine deployment to Japan in 2017. In addition, a CP-140 patrol aircraft is flying in support of North Korean sanctions monitoring.

These initiatives establish important links with the major security players in the region and allow us to assess any potential opening towards Taiwan, such as the U.S., Japan, Singapore, or India inviting Taiwanese forces to one of their multinational exercises. Canada could also push for Taiwan’s inclusion in Rim of the Pacific (RIMPAC), given our decades-long support for this important multinational exercise.

In addition, Canada should be open to having its naval ships make port calls in Taiwan, ideally within a multinational framework. Such a framework is already forming in the South China Sea, with Canada, the U.S., Australia, France, Japan, and soon the United Kingdom informally agreeing to conduct regular naval transits to ensure freedom of navigation. Should Taiwan be attacked these are also the nations most likely to respond.

Canada could also join the Netherlands and the U.S. in helping to upgrade Taiwan’s existing fleet of submarines, to fill the gap until the eventual Taiwanese-built replacement submarine are built. Notably, Canada has extensive experience in this type of conventional submarine upgrading and international success in selling and installing key naval combat systems.

Taiwan is also regularly tested by Chinese military probes, cyber attacks, and espionage. Canada would be wise to join the U.S. intelligence effort there. If a more cautious route is desired, however, Canada could follow recent muted Taiwanese-Japanese initiatives to establish a more formal intelligence-sharing agreement.

This effort would be aided by having a full-time security liaison officer or military attaché at the Canadian Trade Office Taipei. A multi-tasked diplomat has neither the time nor the qualifications to deal with the range of cyber and espionage activities confronting Taiwan’s authorities.

These actions will undoubtedly produce the usual hyperbolic outrage from China. Notably, however, almost all are based on actions some other Western-oriented nation has already taken. Further, many of the security-related recommendations were selected because they best offer Canada the option of joining a multinational effort in advancing them.

A growing number of states want to take concrete security steps to send a clearer signal to a China that has not responded to engagement and is taking increasingly risky action against Taiwan. It’s time for Canada to join them.

Eric Lerhe is a Munk senior fellow at the Macdonald-Laurier Institute, and is author of the MLI paper Rethinking the Taiwan Question: How Canada can update its rigid “One-China” policy for the 21st century.

Will a gun ban work in Toronto? No: Christian Leuprecht and David B. Skillicorn in the Toronto Star

The case for treating work e-mailing during commutes as hours worked: Linda Nazareth in the Globe and Mail

The case for treating work e-mailing during commutes as hours worked: Linda Nazareth in the Globe and Mail