Unleashing the power of Canadian ideas with intellectual property: Inside Policy June 2016 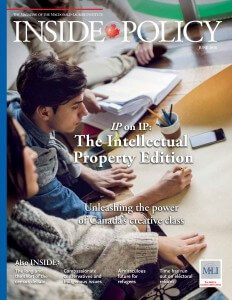 OTTAWA, June 10, 2016 – The excitement over the federal election is now over, and the not-so-new Liberal government is facing a number of troublesome issues that have the potential to affect Canadians for years to come. Among their priorities are strengthening Canadian culture, boosting innovation, and growing the economy. Which makes it odd that there hasn’t been a more serious national discussion on intellectual property protection.

The June 2016 issue of Inside Policy, the magazine of the Macdonald-Laurier Institute, charts a path for making Canada a world leader in intellectual property.

Canada’s lack of attention to the issue has been to our detriment. Why wouldn’t Canada want to protect the ideas and creativity of its artists and knowledge industries?

This issue also features James Bowden on the problems with Ottawa’s electoral reform agenda, Stanley Hartt on the long-form census and the limits of statistics in policy making, Brian Lee Crowley on the positives of Aboriginal entrepreneurialism, Gaétan Caron on how pipeline projects have become bogged down in politics, Philip Stevens on why well-intentioned people are incorrect about drug patents and developing countries, Ian Blue on the far-reaching implications from the Comeau case in New Brunswick, and Elizabeth May on why Canada is a miraculous option for Syrian refugees who’ve arrived on our shores.

Canada’s trouble with the farm: Brian Lee Crowley in the Globe and Mail