Trump and consequences? The 2016 election and Canada’s relations with the US: Christopher Sands in Inside Policy 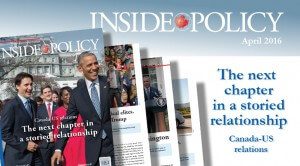 What does the US want from Canada? Despite some ups and downs, for much of our history, the answer has been fairly clear, writes Christopher Sands. But Canadians would be forgiven for being alarmed by the foreign policy debate in the current election.

The 2016 US election is impossible to ignore. Canadians have a ringside seat for the greatest show on Earth, which would be fun if it didn’t matter so much.

There is an anti-establishment mood in the United States this year, challenging both parties. This creates a problem: typically, you can reliably estimate the direction of US foreign policy, and of US policy toward Canada, by sizing up the establishment figures in line to take on key jobs in each candidate’s administration. This year, candidates like Bernie Sanders and Donald Trump are confounding this method.

Of course, Canada has rarely come up on the campaign trail in 2016 (unlike 2012, when the Keystone XL pipeline made a Canadian issue part of every presidential debate). So even if the establishment is viewed skeptically by voters in 2016, perhaps the default US policy toward Canada will continue. After all, if no one sees anything controversial about Canada, why expect change?

That would make sense if the goals and objectives of US Canada policy were clear. The populist backlash against traditional US establishment leadership has sent US politicians scrambling for new approaches to trade, immigration and security. And that is the underlying cause for concern about the 2016 election and its impact on bilateral relations: Has the United States itself changed, and does it want something different from Canada now?

It is a strange question, because in general, Canadians have been able to count on relatively clear communication and consistent policy from the United States government that was echoed by American friends and business contacts.

After the American Revolution, most in the new United States saw British North America as our American cousins who ought to have joined in claiming independence from Britain. The US position was to finish the revolution and liberate Canada: from the War of 1812, to Manifest Destiny and tough stances on border disputes throughout the 19th century, US presidents alternated between aggression and persuasion hoping to bring Canada into the United States.

At the start of the 20th century, US strategy changed. As the Theodore Roosevelt administration managed to settle the Alaska Boundary dispute, it noted the rising nationalist sentiment in Canada. Roosevelt’s successor, William Howard Taft, saw the potential to draw Canada away from the British Empire – then the United States’ major commercial rival – by promoting Canadian independence.

The Boundary Waters Treaty of 1909 for the first time established an institution, the International Joint Commission, in which Canada was a co-equal partner with the United States and Britain had no role. Taft also negotiated a Reciprocity Treaty with Canada to link the two economies. Canadian voters rejected the treaty in the 1911 general election. Yet from this period onward, the United States pursued economic ties with Canada, promoted Canadian independence, and a weakening of the British Empire.

What these eras have in common is the US rivalry with Britain. Without that, it is difficult to imagine that the United States would be able to devise a consistent approach to Canadian relations. The United States Constitution makes it difficult to accomplish things by design, with checks and balances and a separation of powers. It takes a major national security crisis, threat or rival to enable sufficient unity among US leaders for a coherent strategy to emerge.

When the Canada-US Free Trade Agreement took effect in 1989, two things happened. First, the US strategic objective in the 20th century was realized; and second, Canada formally accepted close economic ties with the United States provided that its sovereignty was respected. The new joint strategic objective was now the foundation of ever-closer bilateral relations with an attendant mutual commitment to sovereign independence of both countries.

The shared idea of the relationship was honored even in the breach by both sides. Canadian officials cited it as a reason for President Barack Obama to approve the Keystone XL pipeline, and to criticize the “Buy American” provisions of his stimulus program after 2009. US officials invoked it to persuade the Harper government to join the Trans-Pacific Partnership talks, and to seek changes to Canadian intellectual property rights protections. And it seems that both sides raise it whenever the softwood lumber dispute revives, or an automobile plant is competing for new work from decision-makers in the other country.

While it hasn’t been perfect, this shared understanding has improved the health of the relationship since the late 1980s. So much so that major shocks, like the Sept. 11, 2001 terrorist attacks on the United States, led gradually to closer US-Canadian cooperation rather than a breakdown in trade.

But what authority does the shared commitment to economic integration and national sovereignty have today? Have globalization, terrorism, and the return of great power geopolitics rendered this consensus unsustainable?

One lesson that can be drawn from the surge in populism in the 2016 election campaign in the United States is that many voters are unsatisfied with current policy. And a significant segment of the electorate does not trust politicians associated with the US establishment who tell them, for example, that trade boosts US growth, or that immigration provides a net benefit to the US workforce, or that to protect citizens we need to work closely with other countries rather than to build walls unilaterally.

In fact, US-Canadian relations show all of these establishment ideas to be correct. Bilateral trade has grown and both countries have benefitted since 1989. Thousands of Canadians and Americans visit, live and work in each other’s country with little problem and both countries have successfully assimilated immigrants from elsewhere. The closer cooperation between law enforcement and border security officials of the two countries keeps us safer than a Great Canadian Wall could do.

There is no indication that on these issues, the American public disagrees. Canada is more often forgotten, or seen as an exception that proves the general rule that foreign policy should aim to keep other foreign problems at bay. Donald Trump’s bombastic calls for a wall on the Mexican side of the border or a 30-percent tariff on all Chinese imports are cause for worry, but Trump has not called for a radical change in US relations with Canada. Even Bernie Sanders, who wants to cancel the North American Free Trade Agreement, sees trade with Canada as worth continuing.

What has been more alarming is to see how the 2016 US election cycle has shaken the confidence of US leaders in traditional policies by revealing a lack of confidence among voters in the leadership of the country. This new reality has been the subject of books, essays and television debates in both countries.

In contrast, pundits in the United States have not paid enough attention to the extent to which US friends and allies, especially Canadians, have been shaken by this election cycle, too. Once the voters have made their choice, even if it is for an establishment figure such as Hillary Clinton to be the next US president, the United States cannot expect that the rest of the world will simply breathe a sigh of relief and pretend that nothing unusual has just happened.

Immediately after the 45th US president is sworn in, Prime Minister Justin Trudeau should seek – or demand, in a characteristically polite Canadian way – a public affirmation of the US commitment to closer economic integration and the policy cooperation necessary to deepen it.

The next US president should provide that affirmation. Like a married couple after one partner has been acting strangely for a protracted period, Canada and the United States need a renewal of their vows just to put the strangeness behind us.

Christopher Sands is a Senior Research Professor and Director of the Center for Canadian Studies at the Johns Hopkins University School of Advanced International Studies in Washington, DC. He is a member of the Research Advisory Board of the Macdonald-Laurier Institute.

Great Canadian Debates, May 2 in Ottawa: Elizabeth May and David Frum debate the Syrian refugee crisis

Great Canadian Debates, May 2 in Ottawa: Elizabeth May and David Frum debate the Syrian refugee crisis