Time for a national referendum on Senate reform: Crowley on CBC’s Power and Politics 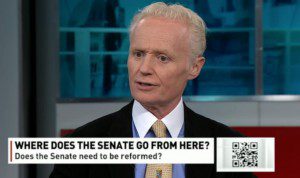 The federal government is going to need to go beyond new spending oversight if it wants to fix deep-seated problems in the Senate, Macdonald-Laurier Institute Managing Director Brian Lee Crowley told CBC’s Power and Politics.

And the best way to make the changes Canadians need to see is for the government to submit a plan for reform to voters through a referendum.

Some have suggested that new accountability rules for Senators will be enough to fix the problem. But Crowley says real change won’t come to the Upper Chamber until Senators are accountable to voters through regular elections.

“I think in a modern democracy the only possible accountability is to the electorate”, Crowley told CBC.

For that to happen, though, a change to the Constitution would have to take place.

Crowley acknowledges that no one wants to see another round of acrimonious constitutional debates, such as those which took place during the Meech Lake and Charlottetown negotiations.

That’s why he recommends a referendum. Only by winning the direct support of the voters can the federal government force the hand of the premiers, who have yet to reach a consensus on Senate reform.

“I would be astonished if the provinces would not fall in line, because otherwise they’d be defying their own electorates”, he said.

Crowley also appeared on CBC morning shows across the country, including Metro Morning in Toronto, to discuss MLI’s plan for reforming the Senate.

He also spoke with CFAX radio in Victoria and CHML in Hamilton.

To read more about Crowley’s ideas on reforming the Senate read his November 2013 MLI paper “Beyond Patronage and Scandal”.