Who Stands to Gain from the New Tanker Wars in the Persian Gulf?: Farhad Rezaei for Inside Policy 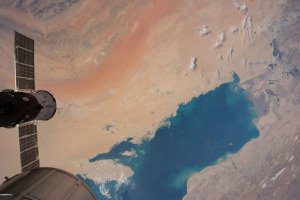 A number of actors have the motivation and wherewithal to carry out the recent tanker attacks, but some are more prominent than others, writes Farhad Rezaei.

Observers are trying to comprehend who and what reasons lie behind the series of sabotage attacks in and around the Persian Gulf, most recently against two oil tankers in the Gulf of Oman. To answer these questions, it is useful to explore who would benefit from the attacks.

In the view of this analyst, there are several plausible actors. The first is the Islamic Revolutionary Guards Corps (IRGC) or elements within Iran’s elite military force. The IRGC is parastatal organization notorious for espousing foreign policy goals that occasionally clash with President Hassan Rouhani’s government and foreign policy team, including having occasionally sabotaged the government’s decisions – though both sides remain committed to the Iranian dictatorship itself.

IRGC officials have sought to dissuade Rouhani from accepting offers of negotiations from President Donald Trump. The IRGC leadership has also threatened harsh retaliation for any American attack. As IRGC Brigadier-General Yadollah Javani has put it: “No talks will be held with the Americans, and the Americans will not dare take military action against us.” Within this context, attacks on a Japanese-owned tanker, which occurred while Japanese Prime Minister Shinzo Abe was in Iran for the first time in nearly four decades, could be seen as an effort by the IRGC to spoil any chance of talks between the Rouhani government and the Trump administration.

A video released by US Central Command (CENTCOM) also shows what appears to be an IRGC patrol boat removing an unexploded limpet mine from the hull of the damaged Panama-flagged Japanese Kokuka Courageous tanker. The assumption is that the perpetrators did not want investigators to find an unexploded mine, given its traceability due to a serial number, and other identifying attributes.

According to Michael Eisenstadt, an expert on regional security at the Washington Institute for Near East Policy, a boatload of sailors trying to remove a limpet mine from the hull of the tanker without wearing heavy protective gear, or the assistance of remotely controlled robotic devices, might indicate familiarity with the characteristics of the device they were trying to remove. Furthermore, Eisenstadt questioned, “If there was a real concern that this was a false flag operation, why would Iranian personnel approach the unexploded device, which the third party could then detonate by remote control from afar, thereby killing the Iranian personnel without first taking the aforementioned precautions?”

The type of boat shown in the CENTCOM video has similar features to crafts that were displayed during the 9th Payambar-e A’zam Sea maneuver by the IRGC in 2015, as well as in a ceremony in 2016 where Rear Admiral Ali Fadavi, the commander of the IRGC Navy (Neyroye Daryai Sepah-e Iran) was present. Made by Iran’s Defense Industries, the IRGC Navy reportedly has 3000-5000 of these speedboats, which are armed with 107 mm rocket launchers and rocket-propelled grenades.

The second possible perpetrator behind the tanker attacks could be the Iranian state as a whole. There is little doubt that the Trump administration’s escalatory “maximum pressure” campaign on Iran has contributed to the current tensions, perhaps to the extent that the Iranian regime has decided to strike back. If this is so, Iran may hope to compel Trump to consider that unsafe waters would roil the oil market and other trade to an unacceptable extent and risk another military confrontation in the Middle East that Trump has pledged to avoid.

It is also worth noting that the attacks on the tankers followed the US sanctioning of Iran’s largest and most profitable petrochemical group, Persian Gulf Petrochemical Industries Company (PGPIC), and its 39 subsidiaries. The tankers that were sabotaged include: Front Altair, transporting 75,000 tons of petrochemical feedstock from naphtha to Taiwan, and the Kokura Courageous, loaded with a cargo of methanol in Saudi Arabia en route to Singapore.

The attacks, in addition to direct retaliation for the new sanctions, could have been an effort by Iran to create a rift within the anti-Iran coalition in the Persian Gulf.  While a strike on US troops in the region might drag the US and Iran into a full-scale military confrontation, small-scale incidents in the Gulf of Oman – as opposed to the Strait of Hormuz – might not provoke the United States. The counter-argument, as one Iranian observer noted, is that the Iranian government is well aware that “such attacks help its regional enemies to play the victim and portray Iran as the chief devil in the room.”

The third possibility is that the attacks were false-flag operations, perhaps carried out by Saudi Arabia and/or the United Arab Emirates (UAE), Iran’s arch regional rivals, for the purpose of spoiling any mediation by the Japanese prime minister and further aggravating US-Iran relations. It is difficult to imagine that the Iranian regime would want to embarrass the prime minister of a country that in the past has been a major buyer of Iranian oil on the same day he was meeting with Iran’s supreme leader – even though, as noted earlier, there are certainly reasons why either the IRGC independently or the Iranian regime as a whole might have an interest in doing just that.

Saudi Arabia, however, has become increasingly unpopular in the US Congress because of its disastrous intervention in Yemen and the apparently state-ordered brutal murder of journalist Jamal Khashoggi. Even the Republican majority Senate has voted to block the transfer of $8 billion in arms sales to Saudi Arabia and the UAE. The tanker attacks might give Trump more ammunition to veto such a measure and for Congress to fail to override such a veto. It also seems to belie what looks like the IRGC naval personnel removing the mine from one of the damaged tankers, as shown in the CENTCOM video mentioned above.

Another group that might benefit from the attacks is the Mujahedin-e Khalq (MEK), an Iranian  opposition group that wants the US to increase economic pressure on Iran and even overthrow the regime by military means. However, the MEK lacks the expertise required for such operations.

From this analyst’s point of view, the IRGC, the Iranian state or Iran’s regional rivals could all have the motivation and wherewithal to carry out the recent sabotage. However, as this article shows, there is greater plausibility that the IRGC might be the culprit, with a more modest chance that this attack could come from the Iranian regime itself. Least likely seems to be that these attacks are a false flag operation. Whoever was responsible, the Islamic Republic will not be the only country that suffers the consequences.

Dr. Farhad Rezaei is a member of the Association for the Study of the Middle East and Africa (ASMEA) in Washington, DC and co-authored (with Ofira Seliktar) Iran, Israel, and the United States: The Politics of Counter-Proliferation Intelligence (NY: Lexington Books).