St-Laurent and the Revitalization of Rural Canada: Ken Coates for Inside Policy 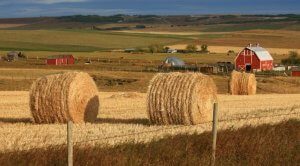 With a growing chasm between rural and urban Canada, and between Central Canada and the north and west, we can look to St-Laurent for inspiration to bring this country together, writes Ken Coates.

This article appeared in the latest issue of Inside Policy.

Before the Second World War, rural Canada was trapped in a long and disastrous depression, particularly in the prairie west. The war ended the immediate economic crisis, replacing it with a military conflagration that engulfed the country for six years. At the end of the conflict, the people of Canada stared into the unknown, uncertain if the Great Depression would return or if the country could make a constructive transition to a peacetime economy.

For rural Canada, with memories of the dust bowl still strong, the end of the war and the post-war rebuilding held fear of a return to the pre-1939 economic troubles. However, through the tenure of Prime Minister Louis St-Laurent, much of rural Canada instead experienced a decade of widespread opportunity.

Throughout the war, the natural resource economy and Canadian agriculture generally stayed strong, but the percentage of the population living in rural areas fell almost 10 percent between 1941 and 1951. The relative decline continued through the 1950s, reflecting the rapid growth of the country’s largest cities. But in post-war Canada, unlike the country in the 2020s, rural constituencies still played an influential role in federal and provincial politics and had significant influence over national affairs.

In the 1940s and 1950s, all political parties worked hard to cultivate rural voters and to respond to their needs. In his first election as Liberal Party leader, Louis St-Laurent swept to a resounding victory, securing 191 seats and a large majority. His showing in the prairie west – 5 in Alberta, 14 in Saskatchewan and 11 in Manitoba – provided evidence of strong rural support. There was discontent, shown by the 10 Social Credit members elected from Alberta, but Liberals had strong rural constituencies across the country.

The St-Laurent government played a major role in the improvement of the quality of life in rural Canada through the late 1940s and the 1950s. And more broadly, the transitions in rural Canada from the 1930s to the 1990s have been profound, including a dramatic rebound from the Great Depression, rural electrification, the improvement of country roads, expanded educational and health services, advanced mechanization of agriculture, and a general improvement in the quality of life across the country.

This same time period saw both the rapid expansion in rural production (agricultural, forestry and mining) and sharp transitions in rural living. Communities that developed along railways and near grain elevators in the 19th and early 20th centuries declined dramatically toward the end of the 20th century, largely as a result of improved transportation systems.

The post-war boost to rural Canada owed a great deal to the infrastructure investments of the St-Laurent government. These investments sought, in turn, to enhance national unity by binding the country together, in the spirit of the Canadian Pacific and the Canadian Northern/National Railways. Nation-building had become an obsession under William Lyon Mackenzie King, who like many of his predecessors worried about national unity. The advent of universal social programs, led by the Mother’s Allowance in 1945, was matched by a bevy of post-war initiatives, including urban housing, that saw the federal government take increasingly bold steps into the realm of social programming.

As Prime Minster, Louis St-Laurent focused more on the country’s physical infrastructure than on the expansion of the social welfare system, although he continued many of his predecessor’s initiatives. During the war, Canada had developed a robust industrial system that had sustained the Allied military effort and provided a strong foundation for the shift to a peacetime economy driven by domestic consumption, particularly of cars, suburban homes, household appliances, and consumer electronics. But the country was far from complete. Private travel between major southern cities was poor and unfinished. The middle North, to say nothing of the Far North, was not well-connected to the rest of the country, leaving much of the nation’s resource potential unrealized.

In a measure of fundamental practical and symbolic importance, the Liberal government announced the Trans-Canada Highway Act in 1949. This project, which led to the opening of the highway in 1962, made private automobile travel easier and more dependable from the Atlantic to the Pacific, replacing the uneven quality of existing connectors and providing tangible proof of national unity. For many parts of rural Canada, from the Maritimes through to British Columbia, the Trans-Canada Highway represented a crucial development. Towns and small cities found themselves with ready access to larger centres and the enhanced economic opportunities attached to improved transportation systems. This major and unifying effort was matched by a commitment to the St. Lawrence Seaway, which had a comparable impact on the social and economic development of the Great Lakes when it opened in 1959.

As Canada addresses the current challenges of rebounding from the COVID-19 pandemic, it is useful to reflect on the lessons learned in the St-Laurent years. In contrast to the 1950s, rural Canada’s political stature is significantly lower in the 2020s. The empowered rural ridings of the 1950s factored prominently in national politics; the minority Liberal government of 2021, rooted largely in the major cities, has no such engagement with rural Canada.

Canada’s current approach to rural regions lacks a St-Laurent-like commitment to rural revitalization. A small effort to expand rural Internet service and continuing commitments to address First Nations’ water crises compare poorly to multi-billion-dollar investments in urban transit systems and major industrial support programs directed at the cities. The patchwork of federal economic programs targeted at rural areas lack the focus and long-term foundation for rural empowerment that were the hallmarks of Liberal plans in the 1950s.

The post-war years are not the 2020s and it’s wrong to expect that the Trudeau government would adopt the strategies that worked after the Second World War. But it is important to remember that a government like that under Louis St-Laurent, with solid support from across the country, with strength in both cities and rural areas, stands in sharp contrast to current realities, with party alliances separated by rural/urban divides along with ideological and partisan differences.

Perhaps this is the core lesson from the St-Laurent government: We need a new kind of politics that can bring together urban and rural Canada, and create a new commitment to the future of Canadians who have been left behind by today’s leaders.

Ken Coates is a Munk senior fellow at MLI.

The perils of a failure to innovate in confronting pandemics: Tarun Katapally for Inside Policy

The perils of a failure to innovate in confronting pandemics: Tarun Katapally for Inside Policy