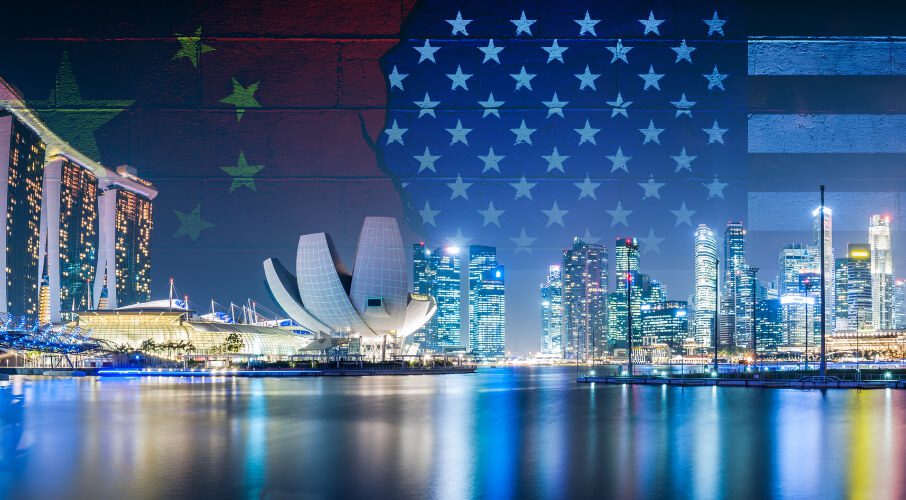 Amid the ensuring Sino-US rivalry in the Indo-Pacific, Singapore has found a “sweet spot” where it avoids making choices between the two superpowers and yet builds on principles favourable for the region, writes William Choong. Such a “sweet spot,” however, might turn increasingly elusive.

In recent years, the Indo-Pacific region has been marked by enormous strategic challenges, ranging from the festering rivalry between China and the United States to a slew of “hotspots” such as the South China Sea, the Taiwan Strait and North Korea’s nuclear program. For smaller countries in Southeast Asia, such as Singapore, the need to uphold their national interest yet maintain agency has become even more challenging.

As a small city-state, Singapore tends to take the world as it is. It does not adopt an “idealistic view” of what things should be but seeks to “live” with its external environment. Singapore pursues three key approaches: maximizing the number of friendly nations to maintain freedom of action, seeking a balance of power where no major power dominates, and securing an American regional presence that benefits all countries, including China.

Such a measured approach has worked. Singapore has become one of the United States’ most reliable partners in the region. Yet, it maintains strong ties with China, Washington’s foremost geopolitical competitor.

The geopolitical competition between China and the United States has led to competing visions of regional order: China’s Belt and Road Initiative and the US-led “free and open” Indo-Pacific vision (FOIP). On this, Singapore and the nine other member states of ASEAN (Association of Southeast Asian Nations) have sought to put their imprimatur on the regional architecture, in the form of the ASEAN Outlook on the Indo-Pacific (AOIP).

Singapore tacks closer to the AOIP, which espouses four key areas: maritime cooperation, connectivity, the UN’s 2030 Sustainable Development Goals 2030, and economic and other forms of cooperation. Other elements include openness, inclusivity, transparency, respect for international law and ASEAN centrality. Meanwhile, the US-led FOIP stresses principles such as the rule of law, no recourse to the use or threat of force, freedom of navigation and overflight.

While there are overlaps between the AOIP and FOIP, the key difference lies in the framing of the Indo-Pacific. The former puts the region in a geographic frame and does not seek to manage the challenge posed by China, whether directly or indirectly, while the latter is less limited by geography and is more focused on China’s challenge to the international order.

To be fair, the US-led FOIP and the Quadrilateral Security Grouping (the Quad, which has the same countries as the former: Australia, Japan, India and the US) do not use any language in their published statements alluding to the threat of China or the need to contain it. But it is widely agreed by observers (and China) that the Quad is a mechanism to contain Beijing. The four countries’ promotion of the FOIP is nuanced and sophisticated, promoting principles and not focusing on the countries that challenge such principles. A good example here is former Japanese Premier Shinzo Abe. Speaking in 2014, he called for adherence to international law and no resort to the use of force in the South China Sea. Here, China was not singled out, but Mr. Abe’s comments can be seen as an indirect swipe at Chinese expansion in the South China Sea.

Singapore has been reluctant to support the US-led FOIP concept, or the Quad that accompanies it. Speaking in 2018, Foreign Minister Vivian Balakrishnan said that Singapore would not sign up for the FOIP, given its indeterminate nature. He stressed that ASEAN needed to play a central role in the region’s architecture. Singapore’s reluctance could be surmised as a calculated move to avoid antagonizing China, which has riled against the FOIP as a concept that would “dissipate like sea foam.”

Singapore’s refusal to “take sides” between China and US has enabled it to hit the “sweet spot” between the two superpowers. As a partner of the US (but not a formal ally), the country does not bear the burden of hosting US military bases; in addition, its ties to Washington do not provoke Chinese ire. The island enjoys solid relations with Washington, facilitating the US military’s access to Singapore’s air and naval bases via the 1990 Memorandum of Understanding (MOU), which was subsequently updated in 2005 and 2019. A 2005 Defence Cooperation Agreement provided new areas of cooperation: military, policy, strategic, technology and non-conventional security. The United States is also Singapore’s biggest source of foreign direct investment and has a trade surplus with the island.

Singapore also enjoys wide-ranging ties with China. The country is the top foreign investor in China and supports China’s Asia Infrastructure Investment Bank and the BRI. Interestingly, the two countries signed an enhanced Agreement on Defence Exchanges and Cooperation, which enabled the People’s Liberation Army and the Singapore Armed Forces to train together and includes, among other elements, a regular ministerial dialogue. The agreement was signed in October 2019 – notably, 27 days after Singapore and the US had extended their 1990 MOU. In December 2021, the two countries signed 14 new bilateral deals in areas such as sustainability, digitalization and people-to-people changes.

Singapore, like many other ASEAN countries, has a clear position of “not choosing sides” between China and the US. But its position has also evolved, such that it seeks to exercise agency, engaging with different countries to forge a regional order conducive to its national interests.

For example, Singapore is part of the Global Governance Group, a group of 30 small and middle-sized states, to make the G20 more inclusive. The island, together with the other nine ASEAN countries, are part of the Regional Comprehensive Economic Partnership, which includes China, Japan and South Korea. The Comprehensive and Progressive Agreement for Trans-Pacific Partnership (CPTPP) of 11 nations was formed on the backbone of the Pacific Four countries of Singapore, Brunei, Chile and New Zealand. The CPTPP came to fruition even after the US withdrew from the original agreement in 2017. Chan Chun Sing, Singapore’s education minister and part of its fourth-generation leadership, notes that the CPTPP highlighted the “power of an idea” and is a good example of “geopolitical entrepreneurship.”

In June 2020, Singapore, Chile and New Zealand signed a new digital economy partnership agreement (DEPA) to promote digital trade and provide a digital economy framework. Currently, Canada, China and South Korea are interested in joining the agreement. Singapore is the port of choice for European navies (Germany, France and the United Kingdom) on their Indo-Pacific deployments, ostensibly to express their interest in upholding a rules-based order in the Indo-Pacific.

Singapore’s evolved approach, from “not making choices” between China and the United States to crafting a regional order favourable to its national interest, is a strategy that has been replicated by Vietnam. Like Singapore, Vietnam has sought equidistance between China and the US, yet participates in regional arrangements (such as the CPTPP and RCEP) which help enhance its agency amid great power rivalry. It is not surprising then that both ASEAN countries were selected by Lloyd Austin, the US Secretary of Defense, and Kamala Harris, US vice-president, when they visited the region in 2021.

While Singapore’s evolved position derives geopolitical benefits, this state of affairs is not static, given that it is premised on stable Sino-American relations. For example, Singapore might be called on by Washington to provide resupply and access to US naval ships going from the Persian Gulf to the Taiwan Strait in the event of any contingencies. As one prominent Singaporean commentator put it, Singapore’s search for a geopolitical sweet spot between the two major powers will grow increasingly elusive.

William Choong is a Senior Fellow at the ISEAS-Yusof Ishak Institute, and Managing Editor of Fulcrum, the Institute’s commentary website focused on Southeast Asia and its wider environment.