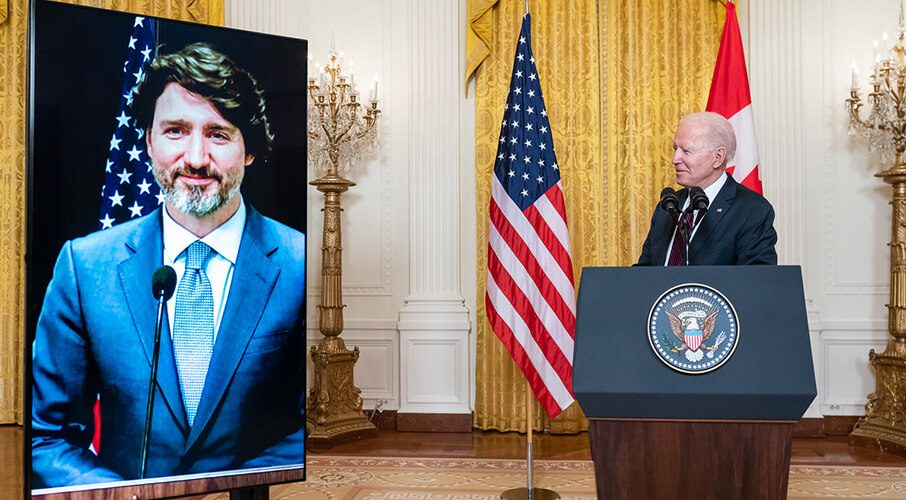 For roughly a decade, US leaders have been attempting to shift focus to the Indo-Pacific region. In many ways, this would seem to be a natural area for deeper cooperation between Ottawa and Washington. Like the United States, Canada borders the Pacific. Unlike the United States, Canada is part of the Comprehensive and Progressive Agreement for Trans-Pacific Partnership (CPTPP). So greater American attention to the Pacific (and at least a partial shift out of the greater Middle East) might appear likely to provide an opening for closer coordination between Ottawa and Washington in a variety of domains.

To date, however, Canada has largely been a bystander as the United States has built new minilateral groupings that are reshaping various interactions in the Indo-Pacific region. The most active of these reinvigorated groups has been the Quad, encompassing Australia, India, Japan, and the United States. A newer arrangement is AUKUS, which includes Australia, the United Kingdom, and the United States. In the economic and technology space a third group is gaining traction in writing key standards: the Trade and Technology Council involving the United States and the European Union. Together, these three groups include nearly all US treaty allies and all but one G7 member. Which country from both groups is missing? Canada.

Of course, Canada remains a critical player and vitally important to the United States. The US and Canada trade more with each other than they do with any country in the Indo-Pacific region. Moreover, the two allies are founding members of the North Atlantic Treaty Organization (NATO). And they account for two-fifths of the Five Eyes intelligence-sharing consortium, through which Ottawa and Washington remain deeply intertwined on a wide-range of security issues. In short, there are deep geographic, economic, military, intelligence and cultural ties holding the two countries together (indeed, the author has spent part of nearly every year in Canada).

These close ties make it all the more strange that Canada and the United States aren’t working more closely together in the Indo-Pacific. Indeed, Canada’s lack of integration into new minilateral groupings is particularly striking because Canada actually borders the Indo-Pacific, unlike a number of the other countries that the United States has sought to rope into its efforts in the region. For a Biden administration that has focused much time and attention on building relationships with allies and partners, this would appear to be an easy and obvious area of opportunity.

To some extent, difficulties in engaging Canada on the Indo-Pacific are rooted in different perspectives regarding China. Both publics share a skepticism of the Communist Party’s recent behaviour, with 73 percent of people in both Canada and the United States saying they have a negative view of China. But leaders in Washington are far more prone to see China as a military threat whereas their counterparts in Ottawa are more likely to see China as a source of economic opportunity. Although some progress has been made in trying to align Ottawa and Washington’s views on Beijing, the two continue to have somewhat different interests, particularly when it comes to China.

As a result, when Americans look to the Pacific, they often look right past Canada. In US Secretary of State Tony Blinken’s recent speech setting forth the Biden administration’s vision for the Indo-Pacific, he mentioned nearly every Asian player by name: Japan, Korea, Australia, the Philippines, Thailand, India, New Zealand, Singapore, Vietnam, Malaysia, Indonesia, Burma, Taiwan, Sri Lanka, Kiribati, Nauru, and, of course, China. Blinken even specifically noted the importance of the European Union and the United Kingdom to the future of the Indo-Pacific region. Not once, however, did he mention Canada.

This oversight highlights an unfortunate reality – from Washington’s standpoint, Canada is seldom seen as a strategic player in the Indo-Pacific. Canada does not have America’s treaty commitments to Japan, South Korea, Australia, the Philippines, and Thailand, so it has very different security interests in the region. Relatedly, leaders in Ottawa are less likely to worry that China is passing the United States in regional power and influence. Instead, Canadian officials and experts are more focused on the region’s economic prosperity and adherence to key rules.

But American counterparts should see these differences as strengths not weaknesses. Canada is perfectly positioned to play the role of a trusted friend – reminding American leaders when they aren’t paying enough attention to the economic and governance issues that matter most to the region’s key players. Like-minded countries need to build coalitions in four areas – security, economics, technology, and governance – to manage China’s rise. Too often the United States focuses on the first of these coalitions to the detriment of the others. Strategic allies can remind Washington when it is falling into that trap, and who better to do so in the Pacific than Canada?

The time has therefore come for leaders in both capitals to put Canada back in its rightful place as a key player in US debates about the Indo-Pacific region. What might this mean? Ottawa and Washington should take two steps together. First, Canadian and American officials should coordinate closely on the Indo-Pacific strategies that each government is scheduled to release in coming months. Too often, Ottawa and Washington write these documents separately and then compare notes. But Canada’s value to the United States is that it can remind its neighbour when it is overlooking critical issues. Therefore, it would be wise to bring Canada into the strategy formulation process early rather than get needed correctives later.

Second, the United States and Canada should actively reshape the region’s institutions. The Quad and AUKUS were established in part because existing institutions are struggling to meet emerging challenges. This means that the G7, NATO, and Asia-Pacific Economic Cooperation (APEC) are less important for a than they were a few years ago – indirectly diminishing Canada’s regional influence.

Ottawa and Washington should therefore lead a new effort to adapt existing institutions to meet today’s challenges. The G7 should formally expand to include South Korea, India, and Australia, to make it more relevant in the Indo-Pacific. The Five Eyes should deepen cooperation with Asian partners for similar reasons. Leadership on these issues would show vision from Canada, and expanding these groups would increase, not decrease, Canadian leverage in the Indo-Pacific.

Reasserting Canada’s critical role as an Indo-Pacific player will benefit both Ottawa and Washington. Leaders in both countries are increasingly looking to their west, but they shouldn’t overlook closer north-south bilateral cooperation as they do so.

Zack Cooper is a senior fellow at the American Enterprise Institute and co-director of the Alliance for Securing Democracy.