A new paper by Jeff Kucharski and Heather Exner-Pirot examines how Canada’s ability to emerge as a global energy provider has been restricted. 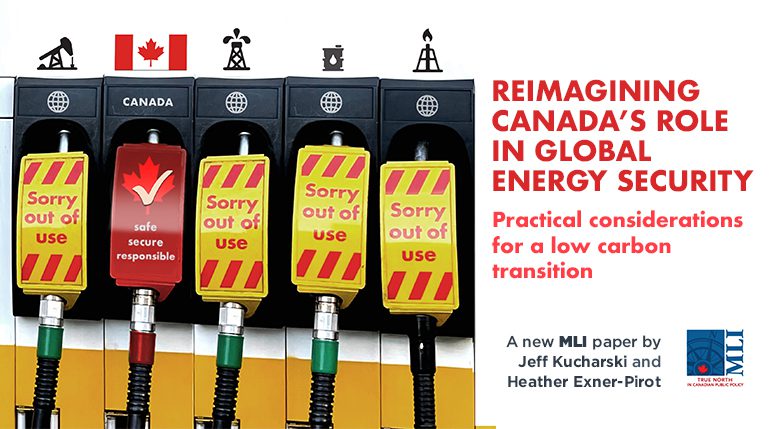 The world is currently facing simultaneous energy and climate crises. There is considerable scientific consensus that the impacts of a changing climate are having significant human costs as well as adverse impacts on biodiversity. And broad agreement exists that we must put in place strong measures to mitigate and adapt to the effects of climate change. At the same time, some climate policy responses have had significant negative effects on energy security, threatening the global economic recovery from the COVID-19 pandemic and putting our future economic security at risk.

Sadly, the pace, logistics, and costs of the transition from fossil fuels to low or zero carbon sources of energy are still hotly debated. This is because reliable and affordable energy is fundamental to our modern economic, political, and social systems, as well as to human well-being, and fossil fuels are still the most reliable and affordable sources of that energy. Energy transitions take decades and there are no quick and easy replacements for fossil fuels, meaning that even the most optimistic scenarios for an energy transition still see coal, oil, and natural gas providing a majority of the world’s energy supply for at least the next decade.

Canada’s energy and climate policy debate has become removed from practical considerations. Ottawa has often assumed a moralizing stance in this debate and shown itself to be willing to ignore practical energy realities for the sake of appealing to certain political constituencies. Thus the debate has become polarized and energy security has suffered as a result. Simply put, the current tension between energy security and climate is not sustainable.

As the holder of the some of the world’s largest reserves of oil and gas, along with world class deposits of many critical minerals needed for the energy transition, Canada is well-positioned to meet the energy needs of our allies and partners. If Canada does not act to export its resources to hungry markets abroad, it will be ceding those opportunities to countries like Russia, Venezuela, and those in the Middle East, which will use their greater market share and leverage over global energy supplies to gain economic and political leverage.

Canadians live comfortable lives and have almost unprecedented access to affordable clean energy. It is easy to believe that if we can speed up the energy transition and quickly get to net-zero emissions, so can everyone else. This is mistaken. Many other countries that do not have sufficient domestic energy supplies or suitable conditions for renewable energy are concluding that the uncertain impacts of aggressive climate change policies are less threatening than the known consequences of a chaotic energy transition. Canada’s response should acknowledge this reality. We ignore an energy crisis in favour of the climate crisis at our peril.

Canada should leverage its position as a stable, reliable, and environmentally responsible supplier of energy resources to the world throughout the transition. Indeed, we will soon be well positioned to contribute meaningfully to global energy security and the energy security of key partners and allies in the Indo-Pacific and elsewhere. Once completed, the TMX pipeline expansion and LNG export terminals will allow Canada to ship oil and gas to buyers in Asia who are increasingly concerned about their energy security in a more uncertain and turbulent geopolitical environment. Importantly, Canada’s west coast terminals are closer to the Indo-Pacific than other major shipping ports in North America and our sea lanes to Northeast Asia remain uncontested and safe.

None of this is to deny the urgent need to pursue strong climate policies and a sustainable energy transition, but we need to do so in a responsible way. Yes, there are health, environmental, and social risks associated with climate change. But equally, there are risks from a chaotic energy transition.

Canada must act fast to remove impediments to energy investment, production and export capacity at a time when geopolitics is upending global energy markets and demand and supply are becoming unbalanced. Stable, secure and affordable energy supplies are vital to human well-being and economic development. Canada has the capacity to play a role in ensuring the energy transition occurs in a way that does not create unnecessary economic hardship, foment inequality and civil unrest, or threaten global energy security.