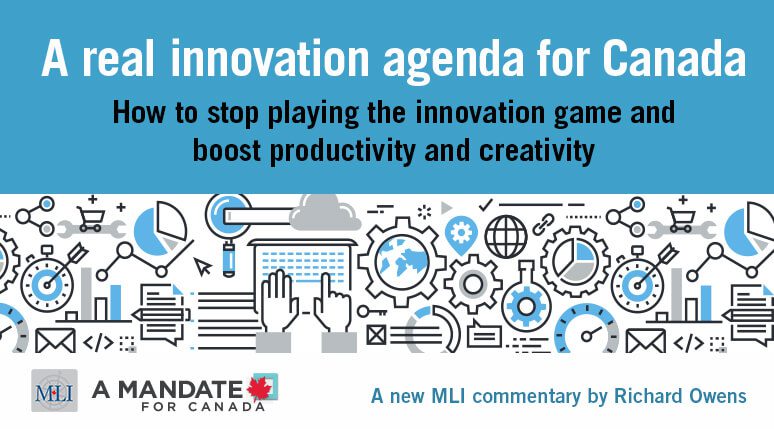 OTTAWA, ON (October 11, 2019): Canada lags behind other developed nations when it comes to innovation. From declining investments in research and development to a lack of competitive productivity, our economy seems to show clear symptoms of “innovation sickness.”

In the latest publication for the Macdonald-Laurier Institute’s “Mandate for Canada” series, MLI Munk Senior Fellow Richard Owens takes a hard look at Canada’s innovation policy framework. In the paper, titled A real innovation agenda for Canada: How to stop playing the innovation game and boost productivity and creativity, Owens not only critiques the failures of governments past and present, but also lays out ideas for the next government to consider that would help promote innovation.

“Our innovation economy needs work, but our politicians are unable or unwilling to focus on the core elements necessary to support and encourage innovation,” writes Owens. “Canada spends billions on programs purporting to make Canada more innovative that, by all measures, have not.”

According to Owens, Ottawa’s traditional approach to innovation has focused on deficit spending, corporate welfare, and subsidies toward certain favoured businesses. In large part, these policies have failed to spur meaningful increases in productivity or inspire serious gains in innovation as they fail to address the core drivers of innovation.

Moreover, as Owens explains, the federal government “largely has created,” many of the roadblocks facing Canadian innovators.

“Canadians are ambitious and able. They want to be innovative and productive. Government, professing to help, keeps getting in the way.”

Seeing as innovation is closely related to gains in productivity, and therefore improvements in wealth and overall well-being of citizens, getting our policy framework right is of serious national importance. But if the current approach has been failing short, what should the government be doing differently to foster innovation?

First and foremost, replacing innovation incentive programs with tax reductions would be far more effective for innovators. Owens argues that “innovation is actually about capitalism, it’s about high rewards for risk takers, it’s about keeping more of what one earns by contributing value to the economy.”

The commentary also suggests retooling our research institutions, such as universities, to better encourage the commercialization of intellectual property (IP). While government has a role to play in terms of providing direct funding for basic research, it ought to be managed through the proper funding agencies, rather than what Owens describes as “whimsical, ministerial programs.”

Perhaps most importantly, Owens makes the case that strengthening Canada’s IP framework will help create incentives for creative people and entrepreneurs. This also requires stronger courts to protect IP, as well as greater sustained efforts to combat counterfeiting, piracy, and other infringements upon the IP of Canadians.

Some specific policy recommendations for fostering a more innovative economy include:

While there is no silver bullet to foster innovation, Owens argues that reconceptualizing our policy framework could improve seriously the prospects for Canadian innovators. “It is past time for both the public and the federal government to focus realistically on ‘innovation’ and government investment.”

To learn more about what a real innovation agenda would look like for Canada, read the full paper here.

Richard Owens is a Munk Senior Fellow with the Macdonald-Laurier Institute and a lawyer who has specialized in business and commercial law, regulation of financial institutions, intellectual property and technology. He has served financial services providers, technology companies, drug companies and others in Internet, technology, intellectual property strategy and patent law, M&A, outsourcing, strategic alliance and joint ventures, licensing and other areas.