Putting Toronto’s Bureaucracy on a Diet: Sean Speer and William Lundy for Inside Policy 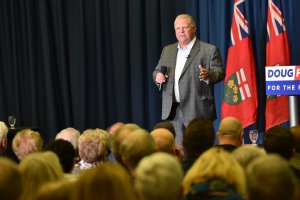 While Premier Ford is correct to focus on inefficient and costly local government in Toronto, it doesn’t necessarily mean that reducing the number of elected officials is the answer. There’s a strong case for reform, but it should start with improving fiscal transparency and putting local bureaucracies on a much-needed diet, write Sean Speer and William Lundy.

Premier Ford’s surprise announcement about his administration’s reforms to city governance in Toronto has produced political waves to say the least. Accusations, insinuations, and threats of secession have followed.

The over-the-top reaction from critics of the premier has precluded a more dispassionate debate about the perceived problems of city governance, the efficacy of the proposed solutions, and what real issues are being neglected.

The case for reducing the size of city council mostly rests on the view that the system is paralyzed by grandstanding and gridlock. Truncating the number of councillors is to “dramatically improve the decision-making process” according to the premier.

He’s not the only one to raise legitimate concerns about the functioning of city council. Speechifying has at times come to supersede governing for some councillors. Unproductive delays often stand in the way of meaningful progress. The mayor can seem powerless in advancing his or her agenda.

It’s no surprise therefore that Mayor John Tory has described parts of the system as “badly broken.” Or that a non-partisan task force at the University of Toronto has called for sweeping procedural changes. The case for reform seems to be broadly accepted.

But it doesn’t necessarily follow that reducing the number of elected officials will improve city governance. Especially since one inadvertent consequence may be to grant greater discretion and power to unelected bureaucrats. Less elected oversight can be a boon to the worst planning impulses of an unaccountable bureaucracy. This is reflected in a considerable body of research and analysis on the exercise of democratic control and the relationship between elected and non-elected officials.

A focus on the size of council also risks neglecting the real problem of bloated city and regional bureaucracies. Here local and regional officials would be prudent to adopt the Premier’s focus on finding efficiencies and reducing spending. It shouldn’t be too difficult.

Total employment in local, municipal and regional government in the Greater Toronto Area has increased by nearly 20 percent over the past five years – almost double the growth of all other industries.

The same goes for wages: median wages for local government employees have grown by nearly two-thirds over the past 15 years – compared to 37 percent for all other industries.

And the City of Toronto’s own spending on salaries and benefits has outstripped population growth, inflation, and other typical benchmarks in recent years.

Large city governments aren’t just costly either. They can slow development and undermine opportunity with burdensome regulations, superfluous inspections and oversight, and perpetual paperwork and red tape. It’s notable that urban policy is one of the few areas where the notion of “planning” remains orthodoxy.

One example: Condo and real estate developers in Toronto typically face nearly a year-and-a-half wait for approvals and spend an average of $46,570 per unit on compliance costs. The result is less housing supply and in turn higher prices at a time when people are rightly concerned about housing affordability.

The City of Toronto and the broader GTA are hardly unique when it comes to rising payroll costs in particular and municipal spending in general. Research by the Canadian Federation of Independent Business finds similar trends across the entire municipal sector up until 2013. And newer research by the C.D. Howe Institute finds that municipal wage growth in Canada has, on average, exceeded inflation for the past several years. This is a recipe for growing budgetary pressures for Canada’s cities given that wages, salaries, and benefits comprise more than half of municipal spending.

Comparing city-to-city fiscal performance can be difficult due to differing levels of fiscal transparency across the country. Differing presentations of operating and capital budgets is one of the sources of this transparency gap or what the C.D. Howe Institute has described as “fuzzy finances.”

How does Toronto perform? The C.D. Howe Institute’s regular grading gave the City of Toronto a “C” grade in 2017 after an “F” grade in 2016. This places the city about middle-of-the-pack and shows that there’s certainly room for improvement – particularly as Premier Ford implicitly and explicitly calls for greater fiscal scrutiny. It’s difficult to test public spending based on its utility and effectiveness if politicians, public servants, and the public can’t figure out how much is being spent and on what.

The upshot is that while Premier Ford is correct to focus on inefficient and costly local government in Toronto and elsewhere in the GTA, it will be incumbent on his government to make the case that fewer elected officials is the right solution to the problem. There’s a strong case for reform. But it should start with improving fiscal transparency and ultimately putting local, city, and regional bureaucracies on a much-needed diet.