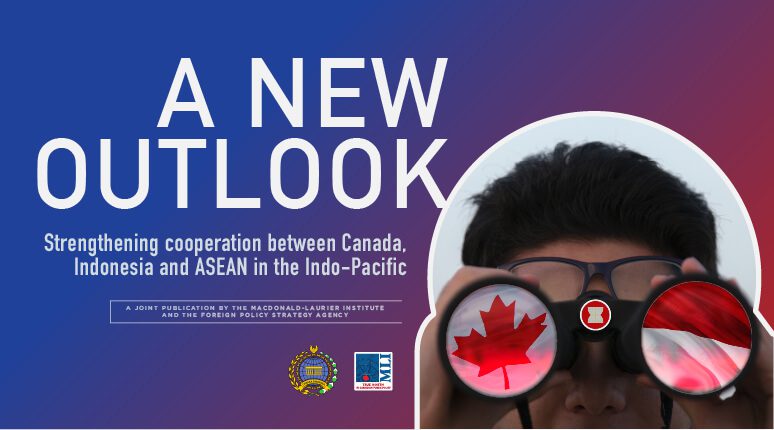 OTTAWA, ON (October 20, 2021): As Canada looks to tilt its outlook more purposefully in the Indo-Pacific, closer cooperation with Indonesia – one of the world’s most populous democracies and a founding member of the Association of Southeast Asian Nations (ASEAN) – should be considered.

A new collection of essays jointly published by the Macdonald-Laurier Institute and Indonesia’s Foreign Policy Strategy Agency highlights the importance of the bilateral relationship between Jakarta and Ottawa in the Indo-Pacific region. This inaugural collaboration, titled, “A New Outlook: Strengthening Cooperation between Canada, Indonesia and ASEAN in the Indo-Pacific,”  brings together some of the leading voices on this issue.

“It’s time for a paradigm shift, and for Canada – along with its traditional part­ners and allies – to assertively and unapologetically promote its interests in the Indo-Pacific region,” write Jonathan Berkshire Miller, MLI Senior Fellow and Director of the Indo-Pacific Program, and Ben Perkasa Drajat, Director of the Centre for Policy Analysis and Development Agency of the American and European Region at the Ministry of Foreign Affairs of the Republic of Indonesia. With Canada and Indonesia having enjoyed close to seven decades of diplomatic relations and with the two countries sharing mutual priorities, closer bilateral cooperation is only sensible. This collection of essays helps frame what strengthened engagement might look like.

In considering the Indo-Pacific and the broader geopolitical context of the region, Siswo Pramono discusses the rise of Asia and the ASEAN Outlook on the Indo-Pacific, highlighting the need for more constructive dialogue, more partnerships, and more cooperation. Rizal Sukma points to Europe’s burgeoning interest in articulating a robust approach to the Indo-Pacific. Berkshire-Miller makes the case for Canada to develop a robust, comprehensive, and multipronged approach to the region.

Abdul Kadir Jailani argues for a reinvigorated Indonesia-Canada partnership to offer positive and constructive solutions to various challenges while also reinforcing ASEAN’s centrality within the Indo-Pacific. According to Shafiah Muhibat, Indonesia will also need a more comprehensive and innovative strategy to face modern challenges as Indonesia’s place on the global stage has profoundly evolved.

Furthermore, Daniel Schwanen notes that, as the region recovers from the COVID-19 pandemic, there are economic development opportunities for Canada with Indonesia and other regional partners. Leonard Hutabarat explores how Canada’s engagement with the ASEAN region, and specifically with Indonesia, could prove beneficial to both countries, given the geopolitical challenges and common interests Canada and Indonesia share.

Drajat writes about the importance of the ASEAN Outlook on the Indo-Pacific (AOIP), which could help foster regional stability. Under the framework, Canada can strengthen cooperation in the region through trade. Finally, Melyana R. Pugu discusses how Papua, Indonesia’s easternmost province, can serve as a gateway for connectivity through trade and tourism.

As Berkshire Miller and Drajat write in the foreword, “there is not an option to stay on the sidelines. Canada can and should play a role here to promote and stand for a free and open Indo-Pacific.”

To read the full publication, click the button below.

Webinar Panel Video: A Better Future? How the West can support democracy in Belarus and Russia

Webinar Panel Video: A Better Future? How the West can support democracy in Belarus and Russia