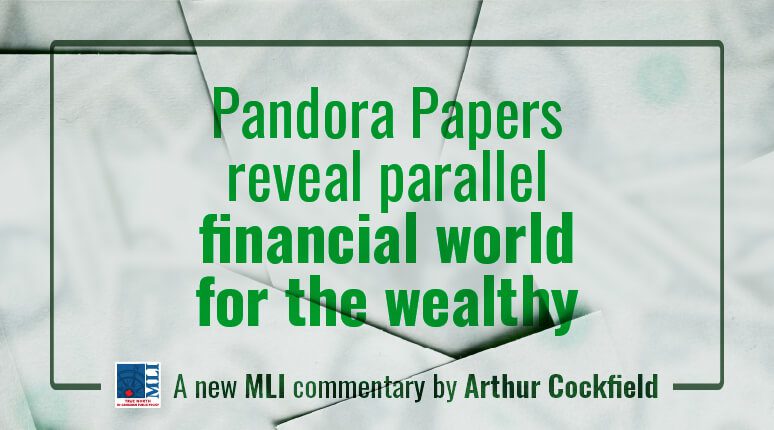 OTTAWA, ON (November 19, 2021): The Pandora Papers, a massive tax haven data leak, revealed how wealthy elites are able to exploit lower tax rates abroad to avoid paying taxes at home. In a new MLI commentary titled “Pandora Papers reveal parallel financial world for the wealthy,” author Arthur Cockfield focuses on the offshore world’s role in enhancing the wealth of the very rich or very corrupt, and how this practice works to the detriment of average citizens around the world.

This continued tax evasion with impunity, alongside stagnated middle-class incomes, could fan the flames of anti-democratic sentiment. As Cockfield warns, “in some countries, grow­ing income inequality is encouraging unhealthy forms of populism, national­ism, nativism and anti-immigrant sentiment – all of which can lead to anti-democratic outcomes.”

To address the challenges presented by tax havens, the federal government has budgeted over $1 billion to help the Canadian Revenue Agency (CRA) enforce its tax laws around offshore tax evasion and aggressive international tax planning. However, as the author notes, this is undermined by Canada’s poor record on prosecuting offshore tax cheats; the failure to hold those accountable could result in an erosion in taxpayer morale, leading to a reduction in tax compliance and tax revenues.

On the international stage, Canada has joined other governments in attempting to make the global tax system more transparent. Recently, Ottawa signed onto an international agreement to implement a minimum 15 percent corporate income tax rate on foreign profits, as well as a second agreement to target large technology firms with global annual sales of over €750 million. But these global agreements may falter if governments cannot agree on detailed rules to implement the frameworks.

As the author notes, governments presumably did not purposefully create a paradise for crimi­nals. However, we have tried to inhibit criminal behaviour to little effect for decades. To curb tax evasion, it will take political commitment, resources, and government willingness to be held ac­countable for outcomes. Ultimately though, the costs of failing to curb tax evasion are far greater than the costs of implementing a more effective approach.

“In an era where gov­ernments are increasingly worried about the anti-democratic costs associated with growing income inequality, now is the time to take action,” urges Cockfield.

To read the full commentary, click on the button below.

Arthur Cockfield is a Professor and Associate Dean (Academic) with Queen’s University Faculty of Law. He is a member of the Offshore Compliance Advisory Committee, a federal government committee formed to evaluate Canada’s ties to the offshore world.