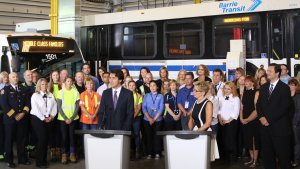 The growing federal role in local infrastructure faces systemic challenges that must be confronted and addressed, write Brian Lee Crowley and Sean Speer.

Recent reports by think-tanks, media and stakeholders, and the Parliamentary Budget Office have documented Ottawa’s challenges in executing its much-vaunted infrastructure plan. Federal-provincial negotiations, bureaucratic red tape, and other impediments have conspired to delay spending and stall progress.

Only about half of the $14 billion earmarked for infrastructure in 2016 was committed to specific projects and about a quarter will fall behind schedule for the period between 2016 and 2018. This is important because it erodes the short-term economic benefits that were anticipated and as well as the case that deficit spending is driven by higher infrastructure expenditures.

These aren’t partisan shortcomings or obvious flaws in program design or a case of governmental incompetence. The problems are systemic. This experience highlights the limits of nationalizing local infrastructure decision-making and financing.

The current application-based model, whereby provinces and cities send projects to Ottawa and it decides which ones to fund, is systemically flawed for several reasons.

There are no doubt other flaws – including (but not limited to) federal underinvestment in core areas such as trade-related infrastructure and First Nations infrastructure such as water, housing, and affordable energy. But most readers will get the point. The growing federal role in local infrastructure faces systemic challenges that must be confronted and addressed.

How we got here dates back to the early 2000s and involves governing choices by both major political parties. Where we go from here is the more pertinent question – especially in light of Ottawa’s ongoing infrastructure challenges.

How we got here dates back to the early 2000s and involves governing choices by both major political parties.

How can we fix the systemic challenges?

There are better ways to fund municipal infrastructure that strengthen local autonomy and accountability and create the right incentives for local policymakers to execute proper pricing and long-term planning.

We could learn much about how to do this from New Zealand, which has been at the forefront of so much creative thinking about sensible public sector management. Local governments are required by law to have infrastructure management plans for each of their significant assets.[1] These plans must include proper pricing and long-term planning that provides for locally-financed replacements to valuable infrastructure when it wears out. This “life-cycle” model requires current policymakers to eschew short-termism and instead focus on future uses and needs, including how to pay for key assets.

A 2017 audit of New Zealand’s experience with lifecycle planning in particular and asset management plans in general provide some useful insights for Canadian policymakers. The keys are (1) evidence-based decision-making based on clear and publicly-available criteria, (2) asset management plans must be adhered to and drive financial and project decision-making over the medium- and long-term, and (3) the process of data collection and measurement must be clear and ongoing.

What does this mean for Canadian policymakers? How can we make our infrastructure process more strategic and less prone to politics?

The Trudeau government to its credit did allocate some federal resources to support local governments develop asset management plans in its first budget. But it’s not a condition for federal funding. It’s merely available to cities for “capacity building.”

Instead, Ottawa should henceforth make all project-based funding conditional on the recipients putting in place this kind of asset management plan. This will ensure that when the current building spree reaches the end of its useful life, provision for the next generation will have already been made and the dependence on Ottawa can be weened off.

The net result would be to devolve back to the municipalities the principal responsibility for project financing and project selection. This is ultimately the most effective way to solve the systemic challenges bedeviling Ottawa’s infrastructure plans.

Brian Lee Crowley is the Managing Director and Sean Speer is a Munk Senior Fellow at the Macdonald-Laurier Institute.

[1] New Zealand’s Local Government Act (Section 101B(1)) requires that “A local authority must, as part of its long-term plan, prepare and adopt an infrastructure strategy for at least 30 consecutive financial years” and (Section 101B(3)) that these strategies must include plans to “renew or replace existing assets, respond to growth or decline in the demand for services that rely on those assets, allow for planned increases or decreases in levels of services provided through those assets”, and so on.

BC won’t be the last obstacle to overcome for pipeline construction: Brian Lee Crowley for Inside Policy

Why co-working spaces are flourishing: Nazareth in the Globe

Why co-working spaces are flourishing: Nazareth in the Globe