There always was something fishy about the so-called Great Gatsby curve, which holds that countries with more income inequality will experience less mobility among income classes. Its literary metaphor misrepresents the Scott Fitzgerald novel (Gatsby doesn’t inherit his wealth), while its economics relies on a limited sample and a poor understanding of the dynamics of inter-generational mobility.

Now a recently released Macdonald-Laurier Institute paper by Munir Sheikh, the former Chief Statistician of Canada, sheds more light on the weak thinking behind the Great Gatsby curve. Sheikh uses the concept of “Zero Dollar Linda,” a term coined by John Stapleton to describe a hypothetical recipient of government social assistance who decides that it is not worth working because of the many government benefits lost as her earned income increases (Zero Dollar Linda is not to be confused with the latest book sales report for crackpot author and NDP activist Linda McQuaig). 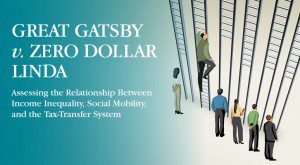 Sheikh’s findings are supported by others who question the existence of a link between increased income inequality and reduced mobility among social classes. Instead of the trade-off portrayed by the Gatsby model, renowned economic historian Gregory Clark’s new book The Son Also Rises finds a vertical line over long periods, demonstrating a constant rate of mobility is associated with different degrees of income inequality. Clark was able to calculate inter-generational mobility for many countries over centuries. His main finding is that inter-generational mobility is constant across nations, with no difference from medieval England to today.

This constant rate of mobility among classes means it’s impervious to attempts by government to influence mobility. And we’re not talking about relatively minor tinkering with variables like tax rates or education systems. Mobility rates were unaffected by revolutionary attempts to change society, including communist rule in China (Mao’s father was a rich farmer), the withdrawal of Japanese colonial rule in Korea, the outlaw of samurai privilege in Japan, the end of colonial rule and the caste system in India, and radical social changes in Chile. In the Western world, mobility rates were unaffected by the Industrial Revolution, the advent of representative democracy, redistributive taxation and mass education. That is serious stasis.

The Gatsby Curve is floundering as a result of several mistakes. Most importantly, it ignored incentives and distortions introduced by the tax and transfer system. It avoided long-term trends, which lowers measured mobility. And its exclusive focus on income as the only determinant of social structures downplays the latter’s true complexity, which originates in family and the inheritance of social status. It is simplistic to single out income to explain the relationship between generations. Several countries have confiscated the income of the rich, who nevertheless still transmit the most important advantage to their children — their genes. Nature dominates nurture; little inter-generational advantage is transmitted by access to resources. Maximizing the human capital you invest in your kids is largely wasted — you can email it in after passing on your genes. Clark estimates that equalizing the family environment for every child would change inter-generational outcomes by only a quarter.

Low mobility rates imply that outcomes for the rich and the poor will equalize eventually, but over 300 years not in one generation. Why does the upper stratum eventually fall back into the pack? People select mates partly on their social status and income, which has a random element related to luck. “The curse of the elite is that they are surrounded by imposters,” concludes Clark. The same is true for the lower class, which includes a portion of people with talented genes who, for whatever reason, slid down the status totem pole. Outcomes change only gradually, since they are embedded in dense social structures, not suddenly in response to government policy. To the degree that governments adopt income redistribution policies that inhibit economic growth, they hurt everyone while possibly hampering their goal of increased mobility.

Iain Duncan Smith for Inside Policy: Poverty and dependency not just an issue for the Left

Iain Duncan Smith for Inside Policy: Poverty and dependency not just an issue for the Left