On how to protect human life, the papal encyclical gets it wrong: Crowley in the Globe

Pope Francis’ papal encyclical on climate change was right to make protecting human life a goal, writes Brian Lee Crowley in the Globe and Mail. The problem? Putting an end to fossil fuel use is only going to make our lives worse.

Before the world’s eco-warriors beatify Pope Francis as a key ally in their crusade to remove humanity’s  footprint on nature, perhaps they should read what he said. Moreover they, and the pope himself, might want to consider what else Catholic doctrine might commit them to, rather than thinking they can pick and choose what suits them.

As Father Robert Sirico eloquently noted in the Wall Street Journal  on June 18th, perhaps the most important call in the pontiff’s  encyclical Laudato Si is for the avoidance of extremes and a respectful dialogue, both sorely lacking on environmental issues. Francis also recognises that the Church is not the fount of all wisdom on the issue: “On many concrete questions, the Church has no reason to offer a definitive opinion; she knows that honest debate must be encouraged among experts, while respecting divergent views.”

One of the extremes against which the pope warns is seeing humanity as the problem, the solution being for people somehow to stop leaving their mark on the planet, as if we were a chronic but shameful condition to be managed through puritanical self-flagellation and vows of poverty and chastity. He rejects the catastrophism that sees overpopulation as a disaster waiting to happen.  Creation is God’s gift to humanity, to be honoured and respected, but not elevated into a false god to be worshipped at humanity’s expense: the pope disagrees that people are “no more than a threat, jeopardizing the global ecosystem, and consequently the presence of human beings on the planet should be reduced.”

But after this point the pope skates onto thin ice in his attempt to reconcile Catholic commitment to the sanctity of human life with his belief that our use of fossil fuels is destroying the natural world.

It is not the sanctity of human life that protects and nurtures that life, but human action. And in particular it is human action that masters the natural (and naturally harsh) environment and creates conditions fit for life. The only reason that we can contemplate with concern but not panic the prospect of nearly 10 billion living on the planet within a few decades is because humanity adds greater value to the natural world than it subtracts.

It is by mixing human intelligence with the natural world, for example, that we vastly expanded the world’s supply of food through the Green Revolution of past decades. Nature alone would have produced starvation for billions. Nature plus humanity produced the food needed to feed our teeming billions.

Essential to that increase in the world’s ability to support human life has been energy and lots of it. Throughout history the improvement of the quality of human life has gone hand in hand with the increase in the quantity and the versatility of the energy available to us, from our own muscles, through the harnessing of animals, water, wind, fossil fuels and the atom. Our planet’s ability to support human life rises with our consumption of energy, and not the reverse.

Moreover the energy must be reliable, which atoms and hydro and fossil fuels are and “renewables” like wind and solar are not. You cannot run a factory, a preemie incubator or an airplane with on-again-off-again power. Better alternatives to fossil fuels will come and we will reduce the CO2 we produce in using them, but to say that fossil fuel use has made the world a worse place for humanity is the reverse of the truth.

Those who demonise our use of reliable energy sources like fossil fuels and nuclear do so by vastly overstating the damage they do and remaining mum on the huge benefits they confer. Among those benefits, as philosopher Alex Epstein rightly observes, is an increasing ability to protect ourselves from the dangers of the climate. During the last century, during which humanity’s energy use grew strongly, the number of people who died from climate-related causes plummeted. Our energy-intensive life makes us less vulnerable to a dangerous natural world, not more. 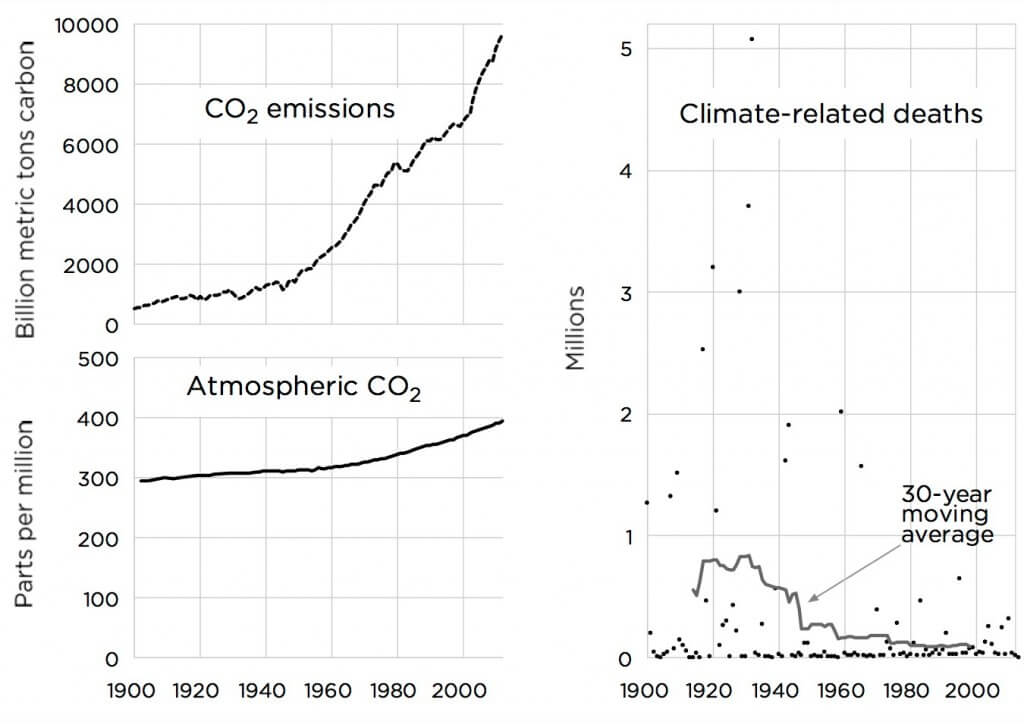 A pope concerned with improving the quality of life for all humanity and for greater global justice would not, therefore, call for an end to fossil fuel use. That is a recipe for disaster, especially for those with the least access to energy already. The environment is most hostile to human life in exactly those places with the least access to energy. The poverty and lack of opportunity there is likewise tied to lack of reliable energy.

The pope properly calls on us to cherish and protect the environment, but Catholicism’s commitment to justice, life and humanity’s central place in Creation also put reliable energy at the centre of a humane future on Planet Earth.