It’s time to change the conversation on provincial trade: Martha Hall Findlay in the Citizen

Writing in the Ottawa Citizen, former Liberal Member of Parliament Martha Hall Findlay argues that opponents of internal trade barriers need a new strategy for liberalizing the movement of goods and services between the provinces. 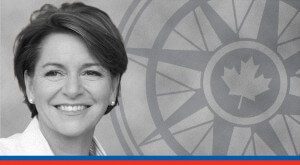 The only way people will be convinced it’s time to repeal these barriers, she says, is when people see just how much the decreased competition hurts their pocketbooks.

The op-ed is based on a column that appears in the new issue of Inside Policy, the magazine of the Macdonald-Laurier Institute.

The benefits of open trade between countries are well established. The same applies to trade between our Canadian provinces and territories, yet while certain provincial premiers are showing leadership in moving toward more open inter-provincial trade, others show signs of regressing into greater protectionism. Even as we work toward concluding free trade deals internationally, we’re still stumbling at home.

Yet showing political leadership is easier said than done. Politicians by their nature respond to what is being said in the public realm — and we as a society have allowed our public discourse to become too dominated by special interest groups – the vocal few.

While the economic theories supporting free trade versus protectionism are widely accepted, there are no special interest groups of economists loudly espousing them.

We need to change the public discourse so as to make doing so more politically palatable. We also need to remind our political leaders that theirs is a responsibility to the betterment of the whole.

For example: Ontario should be able, indeed, encouraged by Ontario taxpayers, to hire the company that can build the best new hospital or highway at the best price, regardless of where the company itself comes from – and put the money saved toward other useful purposes that benefit the community.

Yet Ontario requires companies to have “local knowledge” in order to win contracts for long-term infrastructure projects. Premier Kathleen Wynne, now with a majority mandate, has an opportunity to set her own path — to join other provincial leaders, particularly those in BC, Alberta and Saskatchewan, in opening up inter-provincial trade. Unfortunately, to this point, indications are that she would instead add to the restrictions.

Free traders are often painted by special interest groups as being unconcerned for the welfare of locals. Not true. Tariffs, quotas, non-tariff barriers in the form of more subtle requirements (such as “local knowledge”) in effect take resources away from the wider population in order to give extra to the much smaller number of owners and workers in the favoured industry.

Robin Hood must be shaking his head, as this redistribution of wealth goes the wrong way. Protectionism takes from society as a whole, including those least able to afford it, and gives to a few. No one begrudges anyone a livelihood, yet study after study has shown that the cost to taxpayers of protecting or subsidizing jobs is always a multiple – sometimes a very large multiple – of the wages of the workers thus protected or subsidized. And Ontario “protection” will only encourage other provinces to “protect” their own, preventing those same Ontario companies from expanding.

So how do we get from understanding good policy on opening up interprovincial trade to politicians deciding to do so?

Nationalistic language of “We should do this for the country as a whole” will not work, nor some vague sense of patriotic selflessness. Ontario will not open up construction opportunities to non-Ontario enterprises simply because of some feel-good idea about Canada as a whole. Ontario should do so because it is in the best economic interests of Ontarians.

The language of “protection”, of “saving jobs”, of “encouraging local” sounds good. It pulls at our heartstrings. But even though the larger population suffers from protectionist policies, the effect is more diffuse and impossible to fit into easy, heartstring-pulling sound bites. The concept of greater prosperity for the whole is harder to articulate in simple terms, but we must speak out.

Taxpayers, consumers, voters, all should be actively, loudly calling on their governments to source the best infrastructure, goods and services at the best prices, regardless of the source – particularly when public purses are increasingly under pressure.

And we should encourage the leadership being shown by several Premiers in this regard. We need them to step up even more, and to call for those still hesitating to come off the sidelines. After all, politicians are entrusted with a responsibility to do what’s best for the whole, not just a few, and we must hold them accountable for fulfilling that responsibility.

Martha Hall Findlay, a former Member of Parliament, is an Executive Fellow at the School of Public Policy of the University of Calgary and Chair of the Advisory Council of The Partnership for Resource Trade (www.powerofcanada.ca). This op-ed is based on a longer piece in the November issue of Inside Policy, the magazine of the Macdonald-Laurier Institute.