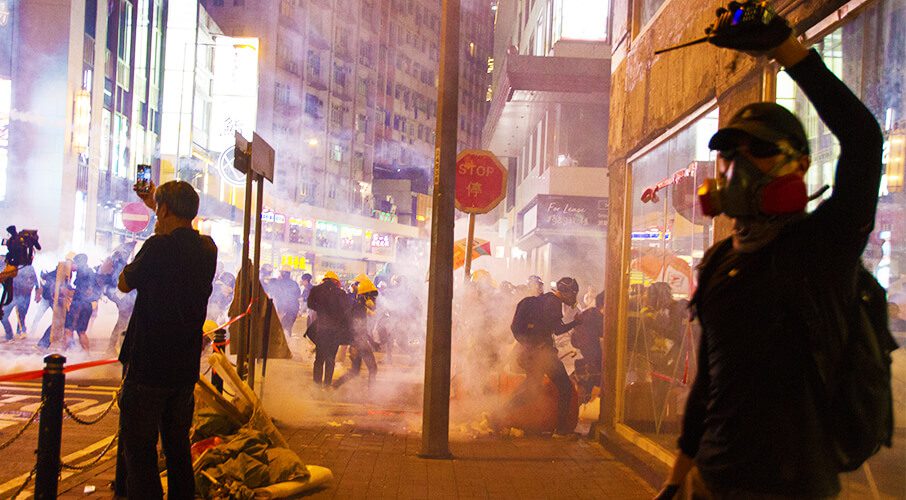 Most democracy protests are short-lived, garner little international attention and are confined to state capitals. The ongoing protests in Hong Kong are exceptional, having endured for more than 22 weeks. They’ve spread to cities and college campuses across the globe, challenged international businesses, and attracted the support of foreign governments as well as politicians of contrasting ideological stripes.

Few protests have the potential to go global like those in Hong Kong due to the large number of people from Hong Kong and mainland China studying abroad – about 700,000 in 2018 – the high level of foreign investment in Hong Kong, and the centrality of Hong Kong to China’s flagging economy.

Hong Kong students abroad have organized numerous protests, sit-ins, and rallies – often wearing black, masks, and the occasional Winnie-the-Pooh costume – to raise awareness and demonstrate solidarity with the pro-democracy protests.  Masks are an emblem of defiance in Hong Kong where they are banned, as is Winnie-the-Pooh. The storybook toy bear is banned due to comparisons with President Xi Jinping.  Students also give lectures, flood social media with messages of support and erect Lennon Walls, modeled after the one first created by John Lennon in Prague for passersby to post opinions about the quest for democracy. They also attend basketball games in the United States, wearing masks and t-shirts emblazoned with the words “Stand with Hong Kong” and holding placards in support of the protests, human rights, and democratic freedom more generally. National Basketball Association Games became a focal point of protest because of the backlash Daryl Morey, general manager of the Houston Rockets, received for Tweeting a message in support of the protesters.

These events, like those in Hong Kong, have turned violent at times. Pro-China activists, seeking to disrupt the Hong Kong student events, have vandalized Lennon walls, shouted pro-China slogans and songs, and exchanged punches.  While Chinese diplomatic missions abroad have lauded the Chinese activists, universities where these confrontations have taken place have pledged their support for freedom of speech, and urged civility in discourse and open, non-violent debate.  Last summer, Australia’s Foreign Minister Marise Payne was compelled to remind foreign diplomats to respect the right to free speech and assembly in Australia after China’s consul-general in Brisbane, Xu Jie, praised Chinese students who disrupted a University of Queensland event by playing nationalist songs and chanting “China is great!”

The Hong Kong protests have also garnered the support of foreign governments.  In 2014, when Hong Kongers took to the streets to challenge electoral reforms, support from Western democracies was limited primarily to rhetoric. Now, however, with the United States embroiled in a trade war with China and support for Hong Kong serving as a pressure point, the US Congress has taken a much stronger stance. In October, the US House of Representatives passed the Hong Kong Human Rights and Democracy Act with bipartisan support. The Senate is expected to overwhelmingly approve the bill. The act establishes a process to impose sanctions and travel restrictions on those responsible for the arbitrary detention and torture of Hong Kongers, and more critically mandates an annual review of Hong Kong’s special status.

Losing this status would mean Hong Kong would no longer be treated as a separate economy but a part of China. This would have significant consequences for both Hong Kong and China: Hong Kong is a financial bridge between the mainland and the rest of the world. Hong Kong is currently the largest offshore yuan clearing center in the world, the largest source of overseas direct investment in China and a leading destination for China’s foreign direct investment outflow.  Hong Kong’s financial industry is also important to China’s signature Belt and Road Initiative, providing loans and other professional services for the infrastructure projects. China has promised strong countermeasures against the United States if the Senate approves the bill and President Donald Trump signs it into law.

Ironically, China has tried to use other countries’ democratic freedoms to win over international public opinion and mitigate the economic effects of the protests. In September, Carrie Lam, chief executive of Hong Kong, wrote an opinion essay “I Am Listening” for the New York Times, explaining why Hong Kong remains a good place to do business and casting the Hong Kong protesters as hooligans.  The Chinese government has also beseeched the foreign media to report on events in Hong Kong in a neutral, objective and comprehensive manner.

Unlike the US government, many multinational corporations doing businesses with China have been cowed by China’s threats. Ironically, Apple – which in 2016 refused on civil liberty grounds to write software to break into the iPhone used in the San Bernardino terrorist attacks – removed an app that Hong Kong protesters use to mark the locations of police and inform protesters about street closures under pressure from China. Meanwhile, Google, which once shut down its search engine in China due to censorship, removed a pro–Hong Kong protester mobile game from its Google Play store.

China has also tried to pressure state-owned industries in Hong Kong to counter the protests. Beijing apparently threatened to deny Cathay Pacific Airlines – China Air, a state-owned enterprise, is a major stakeholder – access to Chinese airspace unless it fired employees for participating in the protests. Activision Blizzard, a leading American video gaming corporation in which the Chinese firm Tencent is also a major investor, suspended an e-sports player from Hong Kong for a year after he expressed support for the protests. Blizzard later reduced the player’s penalty and reinstated his winnings, denying that the decision had anything to do with its relationship to China as a growing market.

Only a handful of international corporations have challenged China. Facebook and Twitter have suspended accounts described as associated with disinformation campaigns by the Chinese government against the protests. Twitter also barred state-controlled news media agencies from advertising on the platform. Neither action is particularly bold, however, since both platforms  are banned in mainland China.

Public opinions polls in the US and Europe indicate that a majority of Americans and Europeans see China’s economic policies as a threat to their countries’ economic interests. China’s recent attempts to control corporations based outside China demonstrates that China’s economic power is not only a threat to economic interests, but also democratic values and freedoms. Action similar to the international boycott of the 2018 Saudi investment conference to protest the assassination of Jamal Khashoggi is required to signal to China that money cannot buy out democracy.

The people of Hong Kong are making tremendous economic sacrifices for democracy. Since the protests began, tourism has almost halved – the worst since the SARS outbreak in 2003 – while retail sales have dropped by almost a quarter. International finance and real estate in Hong Kong are unaffected for now, but Hong Kong entered a recession last quarter for the first time in a decade. Yet, even in the face of such negative economic news, Hong Kongers continue to challenge China and fight for freedoms both in Hong Kong and abroad. Life in Hong Kong is deeply interwoven with the world at large, and the struggle for representative government that was promised by Beijing will continue to reverberate throughout the world.

Dawn Brancati is an associate research scholar at the MacMillan Center at Yale University and the author of Democracy Protests: Origins, Features and Significance. An excerpt is available here. Nathan Law is a democracy activist and Masters of Arts student in East Asian Studies at Yale University. Law is also MLI’s Ambassador on Canada-Hong Kong policy. This article originally appeared on YaleGlobal Online and has been republished with permission.