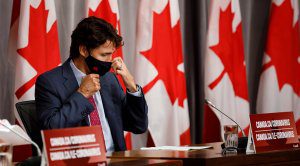 By gambling it can get a free lunch, the federal government is making a daring fiscal bet, writes Christian Leuprecht in CBC.

By gambling it can get a free lunch, the federal government is making a daring fiscal bet.

The economic statement for the 2020-21 fiscal year, tabled Monday, projects the largest single-year budgetary deficit since Canada began keeping track in 1966-67: $381.6 billion. That deficit is greater than total federal spending in the previous fiscal year, $375 billion, which included a $21.77 billion deficit.

Yet that’s not a sure bet. Upward pressure on interest rates would precipitate positive fiscal and higher welfare costs. And post-COVID-19, short-term GDP growth in countries with sounder economic fundamentals could surpass normal GDP growth in Canada, or inflation could force the Bank of Canada to wind down its holding of federal debt.

The risk is that growth may continue to lag, compounded by the economic drag from an aging population, while mounting regulatory burdens stifle investment, productivity and exports.

Monday’s fiscal news may be giving older generations in particular a psychedelic flashback to the ’70s.

Canada’s debt was comparatively low and manageable until the 1972 election, when Pierre Elliott Trudeau’s government ended up in a minority position – and made a strategic decision to spend its way to a majority in 1974. The national debt grew through the end of Trudeau’s term, to 18 per cent of GDP.

The cumulative debt left Brian Mulroney’s government hamstrung. His Progressive Conservatives contained spending at 16 per cent of GDP, but interest continued to compound on the accrued debt.

As a result, the government lacked resources to stimulate the economy during the mid-1990s recession. The Chrétien government that took power in 1993 was forced to reduce spending to fight the national debt, worsening the economic contraction.

It took more than a generation to pay for Trudeau père’s largess: under Jean Chrétien, Paul Martin and Stephen Harper, federal spending averaged 13 per cent of GDP.

In recent years under Justin Trudeau, federal spending initially grew to 15 per cent of GDP – double that for this fiscal year – and is now projected to settle in around 19 per cent of GDP.

The federal balance sheet is now more than $1 trillion in the red. The federal debt-to-GDP ratio has ballooned by an unprecedented two-thirds year-over-year, from 31 per cent in 2019 to 50.7 per cent today.

That’s approaching the debt-to-GDP ratio of 66 per cent during the Chrétien era, but back then hard political decisions sent the deficit on a downward trajectory. By contrast, under the current Liberal government, gross federal debt had already been trending upward before the pandemic. And with the government’s announcement of up to $100 billion in additional post-pandemic spending, the debt-to-GDP ratio is projected to climb further.

If the costs of the pandemic are viewed not in terms of health but through an inter-generational lens, then the burden falls squarely on younger generations. They lose out the most as their education and entry into the job market are disrupted. They are also disproportionately represented among the service and gig workers whose jobs have been lost. And they will shoulder the cost of public debt that is held into the future.

Older Canadians have fared comparatively better, at least those who have accumulated financial assets, as stock market returns have been remarkably buoyant. That bolsters the case for a temporary increase in the tax on capital income — or “wealth,” as pundits like to say.

Germany’s case is instructive. Upon reunification in 1990, West Germany invested more than 1 trillion euros of public funds in the former East Germany. With public finances already under duress, Helmut Kohl’s government struck a grand bargain: pay for the investment in the East with a solidarity surtax (Solidaritätszuschlag, or “Soli”).

It helped Germany cover large costs that arose in the post-Cold War period, but also illustrates the problem with special taxes. Conceived in 1991, it was meant to be in place for only a year, but by 1995 the “temporary” surtax became permanent, with the government appealing to solidarity around German reunification. Initially levied at 7.5 per cent, the ultimate compromise was 5.5 per cent of the amount of tax payable on personal and corporate income. Only now is it finally being phased out.

Like the German example, Canada needs to “build back better,” specifically by turning around its current account liability. The government should be investing in a (modest) structural deficit to enhance future productive capacity, while self-isolating the extraordinary pandemic deficit with a workable strategy to pay it down.

Research on public attitudes suggests that Canadians can be persuaded to pay higher taxes, especially if that strategy frees up fiscal capacity to weather the next storm. To this end, the government could turn the revenue-neutral carbon tax into an actual surtax, for example. In a tight fiscal environment, that would also mitigate the otherwise tempting use of about $2.63 billion annually in carbon-tax revenue for political gain – a real risk, as B.C.’s experience with a carbon tax shows.

This proposal might also give rise to an actual federal-provincial agreement to harmonize the current patchwork of provincial carbon taxes and the federal backstop carbon tax, which could see provinces using some of the revenue to pay down their pandemic debt.

Under such a measure, the cost of financing the debt would be borne by Canadians who would otherwise get a carbon tax rebate. Since that is likely to be regressive, the measure could be offset by also taxing wealth effectively and efficiently by raising the inclusion rate of capital gains, and a genuine commitment to recover revenue lost to personal income tax avoidance (which the Canada Revenue Agency estimates at up to $11.7 billion annually).

There are no easy answers, but the debt hangover from Trudeau père hamstrung public finances for a generation. What will the Dauphin’s legacy be?

Christian Leuprecht is class of 1965 professor in leadership at the Royal Military College, cross-appointed to Queen’s University, and Munk Senior Fellow at the Macdonald-Laurier Institute.