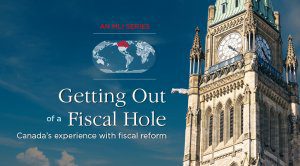 When I was sworn in as Canada’s 34th finance minister on November 4, 1993, it was clear that my tenure would be marked by the degree to which our Government was able to put the country’s public finances on a sustainable path.  Hence the story I was asked to tell in this article.

Budget deficits may be unavoidable and are fully justifiable in some circumstances. Public investment can spur an economy particularly when it is operating below capacity and borrowing costs are low. But a few instances of deficit spending were not Canada’s issue.

Our problem was no secret.  The Federal Government had been running consecutive budgetary deficits for decades and the trendline showed no signs of abating despite generally positive economic growth.  We faced a 6 percent deficit and a federal debt to GDP ratio of 67 percent and both were rising at an ever escalating rate despite the fact that each ratio was already the worst of the G7 countries but for Italy’s. Furthermore, as the Deputy Finance Minister at that time Scott Clark has summarized, “interest costs on the debt were increasing faster than the operating surplus, and the government was borrowing just to pay the interest on its debt.”[1] Finally, as if this was not enough, our National Pension Plan had an unfunded liability greater than the national debt and it could not be ignored.

All of this being said, my biggest fear lay in the fact that our existing debt servicing costs consumed 36 cents out of every tax dollar and I knew that an international financial crisis of some kind was cyclically inevitable. This would cause interest rates in countries with dicey balance sheets like Canada’s to climb further and our finances to spiral out of control if we did not act quickly before the chaos occurred.

And so we acted. And thank heaven we did because we skated through the Asian crisis two years later without incident.

This brings me to the first point I would make which is that deficit cutting is very much a question of priorities but it is also a question of arithmetic. If you are not prepared to make tough choices and defend them then you will not succeed.

To this end one advantage I had is that I inherited a highly competent and well-regarded team at the Department of Finance – one that had the expertise and influence throughout the government to shape and help drive reform. This is one of the strengths of Canada’s permanent public service system.

My second point is that once you have your colleagues and government on side you have to speak to the people.

Here I had another advantage. External events had started to shape public awareness. A Wall Street Journal article in January 1995 that warned Canada was hitting a fiscal wall underscored the need for reform and the Mexican peso crisis in 93, 94 which drove our interest rates up as I had predicted, demonstrated graphically that countries with balance sheet issues like ours were highly vulnerable to other’s problems.

The truth is the Canadian public was more attuned to the magnitude of the problem and the need for reform than most politicians gave them credit for.  But this didn’t mean they didn’t have to be engaged. Thus early on we started country-wide consultations with Canadians from all walks of life to help contextualize the problem and to seek their input. The process was extremely valuable. We were clear and transparent throughout which helped to bring the public onside and to maintain their trust and support which is obviously crucial if you are to have the permission to act.

Trust is also important if you are to continue to have that permission. Governments have only one shot to fix the problem. You cannot ask the public to make sacrifices only to return to them the next year and ask for more. To do so is precisely how a government loses the public’s confidence as we saw in Europe and elsewhere. I was determined not to make the same mistake.

We placed a high premium on equity. Spending reductions were fairly distributed.

Thus we reformed how budgets were developed. We were open and transparent, but in this case replacing pablum and overly-optimistic assumptions with more prudent ones based on the requirement that there could be no future surprises.

Canadians understood what we were doing and why we were doing it. The lesson here is that the public is prepared to support tough choices but they will not do it twice. If they think you have mislead them this is when your support begins to erode.

My final point is fairness. This was not a slash-and-burn exercise. As with any government we wanted to make our operations smarter, more efficient and more responsive. Our process was systematic and evidence based, albeit some of that was anecdotal but it was also fair.

We placed a high premium on equity. Spending reductions were fairly distributed.  No group or region or sector was disproportionately affected.  We were all in this together.  Too often fiscal reform amounts to deep cuts to benefits and services for people.  We were determined to ensure that families did not bear a disproportionate brunt of the cuts.

That being said, our social programs were cut, as indeed were business subsidies by 60 percent but Canadians accepted it because they understood that the reduction in the deficit was the only way we could protect our social foundation in the longer term.

Indeed this was our principal message. Our goal was not simply a pretty balance sheet, it was to protect the social programs on which people relied and that were so important if we were to have an economy that grows. To this end, I made one promise, i.e., that once the nation’s balance sheet permitted it, our first investments would be in those programs on which families depended. And we kept our word.

Four years later, Canada’s deficit was no more. We began to run surpluses and our debt to GDP ratio began a steady downward track. As a result we were able to boost key basic research and enhance important social programs including the largest single investment ever in Canada’s healthcare system while lowering the taxes of Canadian families all because we had wrestled control of spending and our debt servicing costs.

The results in many ways speak for themselves. We averted Canada’s advance into the fiscal wall and instead put it on a more virtuous path. Our public finances became the envy of many. And by the way our National Pension Plan, thanks to provincial and federal action is now an international example to follow.

Of course it was not always easy. It involved tough choices but they were worth it and the Canadian people made it happen.

The Right Honourable Paul Martin was Canada’s Finance Minister, 1993–2002 and the  21st Prime Minister of Canada, 2003-2006. This is the foreword to the MLI Lessons from the Anglosphere series paper: Getting Out of a Fiscal Hole: Canada’s experience with fiscal reform.

[1] Clark, C.S. 2011. “What is ‘Credible’ Fiscal Policy? The Canadian Experience, 1983-2010: The View of a Former Practitioner.” In Fred Gorbet and Andrew Sharpe, eds. New Directions for Intelligent Government in Canada: Papers in Honor of Ian Stewart. Centre for the Study of Living Standards, pp. 104.

Canada unlikely to give up on NAFTA: Laura Dawson in the Western Producer

Minister Wilson-Raybould as MLI’s Policy-Maker of the Year: Coates on APTN

Minister Wilson-Raybould as MLI's Policy-Maker of the Year: Coates on APTN