First Great Canadian Debate of 2015-16: Should the Senate be abolished? 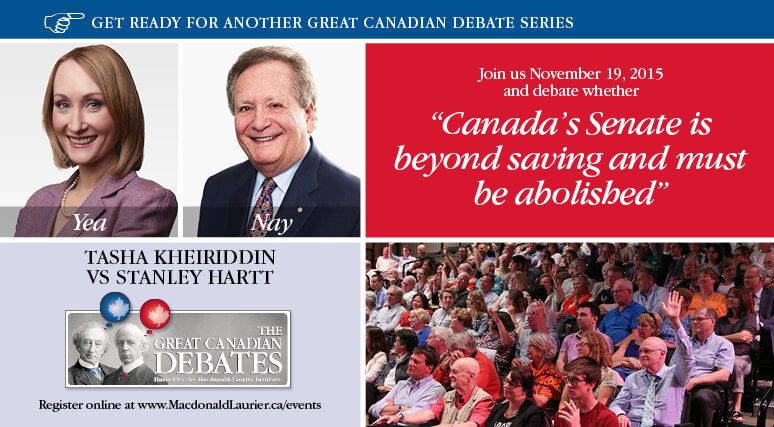 The Macdonald-Laurier Institute’s series returns on Nov. 19 with a look at the future of Canada’s Upper Chamber

OTTAWA, November, 16, 2015 – Is the Senate an ineffective, expensive and undemocratic institution? Or are we overlooking the important work our Upper Chamber performs for our democracy?

Tasha Kheiriddin will face off against Stanley Hartt over the future of Canada’s Senate in the first event on the 2015-16 Great Canadian Debates schedule, taking place on Thursday, November 19 at the Canadian War Museum in Ottawa.

The two will take opposing sides on the motion: Canada’s Senate is beyond saving and must be abolished.

Kheiriddin, an expert on public policy and regular commentator in the news media, will argue in favour. Hartt, a lawyer and former chief of staff to prime minister Brian Mulroney, will argue against.

The Great Canadian Debates, organized annually by the Macdonald-Laurier Institute, create a lively setting in which influential speakers can hash out some of the hottest topics Canada faces in front of a live audience.

Paris attacks have “taken everybody by surprise,” Leuprecht tells CTV