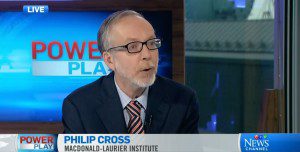 The government has promised a balanced budget but Cross says he believes there will still be a few billion dollars available for new spending.

“I think we’ll continue to see restraint, particularly on the public service compensation side of things, and they’ll want to produce a surplus”

Stanley Hartt in Inside Policy: Ottawa should exercise caution on assisted suicide