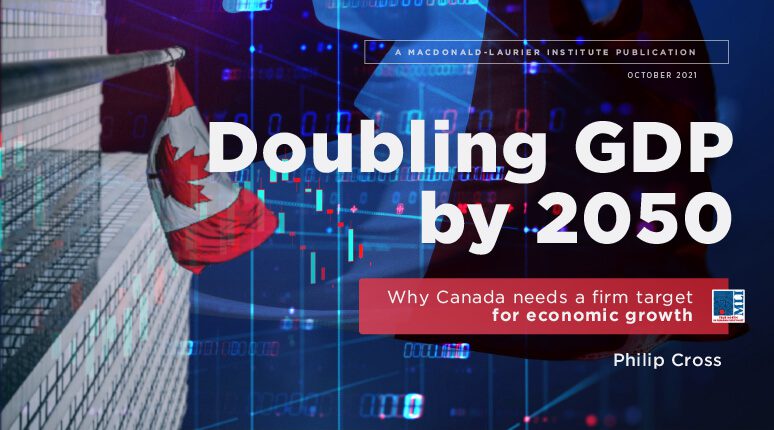 OTTAWA, ON (October 19, 2021): Governments over the years have set targets for greenhouse gas emission reductions, inflation, immigration, spending on health care, deficit reduction, and much more. But Ottawa has lacked similar conviction when it comes to ensuring the long-term prosperity of Canadians.

A bold new MLI paper by Senior Fellow Philip Cross urges Canada to focus on the big prize as we recover from the pandemic. We need to set and meet a target for the economic growth that will allow this country to meet all of its other goals and aspirations.  Boosting our anemic growth rate becomes eminently doable when we see what a drag poor public policy is on the economy, and how easy it would be to fix.

Cross’s new paper, titled “Doubling GDP by 2050: Why Canada needs a firm target for economic growth,” proposes just such an economic growth target – a goal for the federal government of doubling Canada’s 2020 level of real GDP by the year 2050.

This ambitious goal “would grow the economy and create the wealth that will allow Canada to provide work for all who want it, meet climate goals, reduce poverty, be more innovative and become a leader on the world stage,” writes Cross.

Doubling Canada’s GDP by 2050 to $4-trillion might seem like an audacious goal. But Cross notes that to double the GDP over three decades would only require an annual growth rate of 2.5 percent, a rate of growth Canada has achieved at times in the past.

As Cross writes, “a central tenet of the proposal to double GDP by 2050 is that accepting slow growth as our economy’s ‘New Normal’ understates the importance poor policies have had on dampening growth in recent years.” With a target for economic growth always in mind, a government would have to consider the impact of any program or regulation on growth. It would not be able to claim economic benefits from a national child-care program, for instance, without considering the negative impacts on the economy of borrowing money to pay for it.

Policies that redistribute income through taxes and transfers often sacrifice economic growth, as do many environmental regulations. According to Cross, the technological advances that will be necessary to reduce substantially greenhouse gas emissions can only be attained with economic growth and increased investment.

For Cross, understanding the interplay between factors such as population growth, fiscal and monetary policy, the environment, and economic growth is crucial if Canada is to escape its current rut of persistently slow growth. The clear goal of doubling GDP by 2050 will help take all these elements into consideration simultaneously, sending the signal that “slow growth is not inevitable or tolerable let alone acceptable and that ways must be found to raise investment, boost productivity, and restore Canada’s competitiveness.”

“The scattershot approach involving myriad policy objectives clearly has failed, partly because of the lack of an over-riding objective. It is time to prioritize effective policies that boost long-term investment and productivity growth in Canada with the goal of doubling GDP,” writes Cross.

To read the full publication, click the button below.

The Right to Say Yes on Resource Projects: Ken Coates for Inside Policy