Deficits in many major sectors a concern, Ian Lee tells CBC’s The Exchange 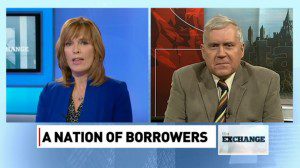 MLI author Ian Lee says that, although it’s not a gigantic worry, Canadians should be concerned about the levels of debt major sectors of the economy are carrying.

“We will have to respond to this because this is not the way to build a prosperous economy”, Ian Lee told CBC’s The Exchange.

Lee was responding to a recent column, written by MLI Senior Fellow Philip Cross in the Financial Post, arguing that governments and other major sectors of the economy have an unsustainable debt addiction.

Lee is the co-author, with MLI Senior Fellow Sean Speer, of the MLI paper “Avoiding the federal deficit quicksand“.