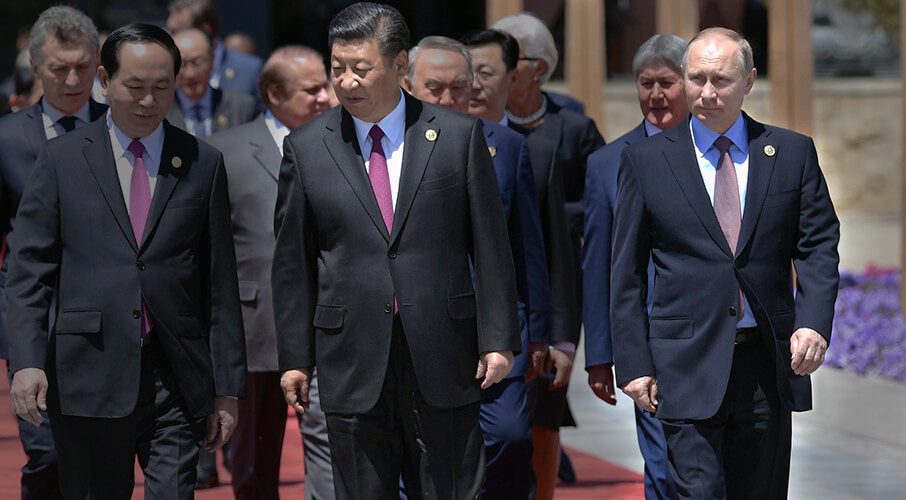 This article initially appeared in the Journal of Indo-Pacific Affairs.

Despite Ukraine not being part of the geographic region of the Indo-Pacific, Russia’s 23 February invasion of Ukraine significantly strengthens the case of the critical nature of reinforcing a rules-based order, the central pillar of not only Japan’s Free and Open Indo-Pacific (FOIP) vision but also the Indo-Pacific strategies, guidelines, and frameworks of the United States, Germany, Denmark, France, and the European Union.

Over the past several months, we have seen Russia use its military might, grey-zone operations, and geographic proximity to Ukraine to pick away parts of Ukrainian territory. It began with Crimea in early 2014, and now Vladimir Putin’s Russia has recognized the self-proclaimed Donetsk People’s Republic and the Luhansk People’s Republic—two parts of Ukraine-proper—as being independent states and launched an invasion of Ukraine-proper at the time this writing has begun.

In the post–World War II order, international institutions and law were designed to prevent large states from dominating small states. It was hoped these institutions could stop the world from spiraling into another major disastrous kinetic conflict, not only in Europe but in the Indo-Pacific region as well.

Today, we are seeing authoritarian states, specifically, Russia and China eschew international law and the stability that was brought about by the post–World War II rules-based order to create spheres of influence extending into Ukraine, and likely other parts of Eastern Europe, in the case of Russia.

This is not so much about a security threat associated with NATO, a military alliance in its backyard, but much more about the dangers of vibrant, rules-based, transparent democratic countries sharing a border with Vladimir Putin’s authoritarian Russia, which is supported by corrupt oligarchs. The dangers of a democratic movement on its borders are centered in the reality that Russia’s government and its current political system are nonrepresentative and do not confer a freedom of press, support human rights, or provide a representative government to its citizens.

More importantly, the Russian government system is not delivering good governance and the economic prosperity that its citizens require. Comparing Russia to other Organisation for Economic Co-operation and Development (OECD) countries, Russia continues to rank low in terms of gross domestic product (GDP), longevity, health, and salary.

Pivoting to the Indo-Pacific region and China, the Chinese Communist Party (CCP) has delivered economic prosperity for its Chinese citizens since the reform and opening period begun in the late 1970s. The CCP has been responsible for elevating more than 600 million people out of poverty and into a middle-class lifestyle.

This record of economic success deserves praise for nearly eliminating poverty, building a middle class, and propelling China to be the second-largest economy by GDP in 2022 and first in the world in terms purchasing power per person. Despite this prosperity, however, we see China trying to establish a sphere of influence within the East China Sea (ECS), the Sea of Japan, the South China Sea (SCS), and arguably through the transport corridors associated with the Belt Road initiative.

For China, the establishment of a sphere of influence, in part reanimates the Tian Xia system (under heaven), a Sino-centric system in which surrounding states deferred (from China’s point of view) to Beijing’s political and security views for a beneficial economic relationship. Interlaced with this modern-day Tian Xia system, we see China trying to recreate its hegemonic position within the Indo-Pacific region, using asymmetric economic relationships, grey-zone operations, lawfare tactics, and co-opting of local elites through the activities of its United Front Work Department. These asymmetric economic relationships are meant to compel neighboring states such as South Korea, Japan, Southeast Asian states, and the political entity of Taiwan to consider Beijing’s interests before they consider Washington’s interests when thinking about political, economic, and security decisions within the region. At the same time, the use of grey-zone operations and lawfare tactics aimed to chip away sovereignty claims and/or threaten counterparts into submission over territorial disputes.

We see China attempting to revise the security architecture within the region, pushing the United States out of the first and second island chains and trying to establish dominance within the SCS, believing “Asia should be governed by Asians”—code for governed by a China-imposed hierarchical politico-economic security system. Evidence of these revisionist objectives are extensive. Beijing outright rejected the 2016 July decision by the Permanent Court of Arbitrations that ruled against Chinese claims within the SCS. China also built artificial islands and then militarized those islands in that same disputed area. Chinese efforts to build a sphere of influence are further evidenced by the practice of fracturism of the Association of Southeast Asian Nations (ASEAN). This is a selective process of influencing countries such as Cambodia, Laos, and Myanmar such that they break away from the consensus-based decision-making process that is required for ASEAN to function as a coherent organization.

By creating a sphere of influence within the region rather than allowing a rules-based approach to govern sea lines of communication (SLOC), the use of fishery resources, and the exploitation of other natural resources in the deep seas—whether that be critical materials, rare earth materials, or petroleum resources—China is demonstrating that the might-is-right approach to managing regional affairs will be the basis for China to recreate the Tian Xia system with Leninist characteristics.

Partification refers to the insertion of the CCP into every aspect of the governing operation system of the Chinese government. This Leninist model, which inculcates a Party Secretariat into organizations such as nongovernmental organizations (NGO), businesses, as well as government organizations, ensures that the Party can dictate how organizations, businesses and NGOs implement their policies to guarantee that they are in line with the Party’s directives.

The recent actions by Russia and China challenge the rules-based process in negotiating international affairs. They are clearly based on a Machiavellian might-is-right approach to dealing with disagreements and security issues. Besides the troublesome projection of military power, the authoritarian systems of Russia and China mean that the normal checks and balances of how countries negotiate and execute their foreign policy with counterparts are not subject to the same counterbalancing influences that would allow their populations to inform politicians and policy makers about how their citizens feel about a particular foreign policy in the manner that ordinary Canadians, Japanese, or Americans can.

The authoritarian challenges to the rules-based system—as exemplified in Ukraine or in the SCS, ECS, and across the Taiwan Straits—demonstrate the dangers of authoritarian governments and the tilt toward an authoritarian world order for the democratic states, as well as middle- to small-sized states. Countries that are promoting a rules-based Indo-Pacific region should also be advocating strongly for coherent action against Russia in the case that its invasion of the Ukraine continues. These states also have lessons to learn from Putin’s Ukrainian gambit and tentatively successful invasion of Ukraine.

States within the Indo-Pacific region need to significantly enhance their deterrence capabilities in the SCS, ECS, and across the Taiwan Straits. They need to augment their economic, digital, and cyber cooperation based on a broader framework built on shared principles of economic security. They need to also continue to build shared institutions that allow them to build shared values, norms, and structures to govern the region according to transparent, rules-based processes.

This institution building and commitment to a rules-based process does not need to be wedded to the development of democratic institutions. Rather it needs to be tied to a commitment to consolidate and buttress a transparent rules-based systems that is to be used to arbitrate differences on security, politics, and economics. This approach allows for a diverse and heterogeneous group of countries to come together to build a common understanding of how the region should be negotiated and should be governed rather than the use of coercive military and economic power.