Writing in the National Post, Member of Parliament Chrystia Freeland argues that 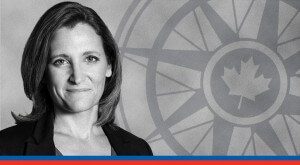 Freeland will argue against the motion “Canadians should stop worrying about income inequality” during MLI’s first Great Canadian Debate of 2015, taking place on Tuesday, March 31 at the Canadian War Museum in Ottawa.

One of the central economic trends of our time is the profound shift in the income distribution of industrialized Western societies. We are moving from the postwar era, a time of strong economic growth, when the gap between those at the top and the bottom actually shrank, to an age of rising income inequality. The most striking characteristics of this age are a winner-take-all phenomenon, with incomes at the very, very top — the 1%, and even the 0.1% — surging, and a hollowing out of incomes and jobs in the middle.

When you look at pre-market incomes — what we earn before the state intervenes with taxes and benefits — this distributional shift is pronounced across all the industrialized economies. It has been sharpest in the laissez-faire United States, but it is happening in the cozy social democracies of northern Europe, too.

As this trend became more and more apparent south of the border, some Canadians were tempted to believe it wasn’t happening here. There were some good reasons for that wishful thinking.

For one thing, our stronger social safety net, particularly our universal health-care system, mitigated the underlying trends driving up income inequality more effectively than the weaker protections in the United States.

The 2008 financial crisis, which we avoided here thanks to our well-regulated banks, played into our perceptions of income inequality, too, because we saw the average wealth of Canadian households rise relative to those of our American cousins.

Finally, the high price of commodities had a ripple effect on wages, particularly those for blue-collar men — the group hardest hit by the hollowing out of the middle class elsewhere — across the country

But, as Warren Buffett likes to say, when the tide comes out, you find out who is swimming naked. Today, as the falling price of oil is pulling down our national gross domestic product and the United States is finally recovering from its Great Recession, the longer-run erosion of middle-class jobs and incomes in Canada is being exposed.

A recent York University study found that over the past decade, the share of low-wage jobs has doubled from 22% to 33% of overall employment in Ontario. According to the Organization for Economic Co-operation & Development, that puts Canada in third-worst place among the organization’s 34 members when it comes to quality of jobs. The Bank of Canada is worried, too. In the monetary policy report for January, the bank said, “the proportion of involuntary part-time workers continues to be elevated.” As the Canadian Imperial Bank of Commerce has put it, we are becoming a nation of part-timers with more and more people precariously employed.

What is to be done? The answer is complicated by the paradoxical nature of rising income inequality and the hollowed-out middle class.

Today’s skewed income distribution is certainly driven in part by successful political efforts of those at the top to tilt the rules of the game in their favour — what some call crony capitalism.

But that is only part of the story. The other powerful underlying forces are the technology revolution and globalization, two largely positive economic transformations that have increased prosperity and created new and exciting ways to live and work around the world.

We are experiencing the same disorienting combination of tremendous technological and scientific advances going hand-in-hand with increasing economic insecurity for much of the population that characterized the Industrial Revolution. A 19th-century American economist described his era as an age of “progress and poverty.” That is the dissonant pairing we are living through today.

The worst response is the one that, in their despair, the Luddites offered. These skilled artisans whose talents were made redundant by the Industrial Revolution decided the only way to defend themselves and their families was to smash the machines.

From the vantage point of today, when we are all wealthier, live longer, are healthier and even taller than our ancestors, thanks to the Industrial Revolution, it is easy to see that while the motives of the Luddites are deeply understandable, their reaction was wrong.

We need to guard against 21st-century Ludditism — anti-globalization and opposition to trade; a rejection of the life-enhancing advances of technology.

Equally, though, we need to reject the counsel of despair we so often hear from the right — that in the 21st century, rising income inequality and a hollowed-out middle class are simply inevitable.

That’s neither acceptable nor true. One of the most dangerous consequences of rising income inequality is that social mobility stalls, too — as the space between the rungs at the top and the bottom gets bigger, it gets harder to climb. Strong public education is therefore more important than ever.

Another essential response is aggressive efforts to spur growth — a hotter job market gives the hollowed-out middle class more bargaining power. Infrastructure investment, a policy strongly recommended by the International Monetary Fund, is an effective way to invest in our economy, and a valuable source of middle-class jobs that can’t be outsourced or done by robots.

Doing no harm is important, too. Government policies — like income-splitting — that specifically benefit those at the top while doing nothing for everyone else will exacerbate rising income inequality, rather than moderating it. The same is true for anti-union rules: A raft of new academic studies shows that unions provide valuable protection for workers whose economic power is waning.

Rising income inequality and a hollowed-out middle class are the dominant social and political challenge facing our generation. North America and western Europe survived the economic transformation of the Industrial Revolution — and ultimately thrived. But we did that only thanks to a wave of transformative social and political thinking — the rise of public education, public health-care and the social safety net — that harnessed its technological advances for the public good. We need to do that again today.

Chrystia Freeland is the member of Parliament for Toronto Centre and the author of Plutocrats. She will be arguing against the motion “Canadians should stop worrying about income inequality” for the Macdonald-Laurier Institute’s first Great Canadian Debate of 2015.

Canadians should stop worrying about income inequality: Buckley in the Post on GCD #1